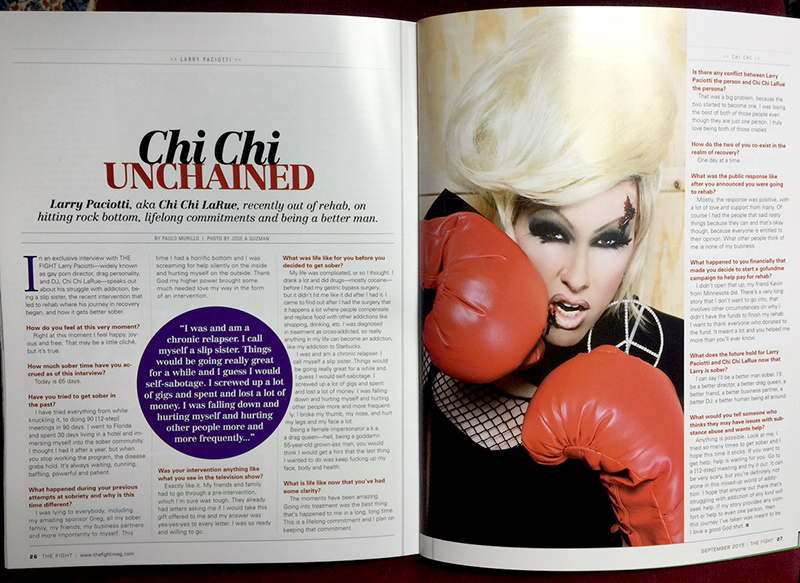 Chi Chi made headlines last year when she found herself on girl interrupted status (more like girl intervened) after  she posted a video on Facebook to let her friends know that she was on her way to rehab (ooohhh, I felt her pain). Evil queens salivated, but for the most part the public was supportive and sympathetic…that is until one of Chi Chi’s friends started a Go Fund Me account asking for money to help pay for the remainder of her rehab tab at the Hazelden Betty Ford Center in Minnesota.  You best believe the evil queens judged and inventoried accordingly. The comments on social media were ferocious.

When you’re new in recovery and you’re in pain and you’re in rehab, you don’t know which end is your ass. It’s possible to have money and not have money. My guess is somebody like a business partner pulled the plug on her funds. It’s hard to say, because she will not say, but that’s all old news anyway. She lived to outlive another public scandal.

The having money, but having money reminded me of when I was in rehab and I had a friend smuggle me a hundred dollar bill so I wouldn’t have to panhandle for chump change  at the meetings. I stashed that bill inside a hole in the bottom of the lamp by my nightstand and I felt like a mighty rich bitch—HOWEVER…the phones and the vending machines only took quarters, so that bill was useless to me. All I had to do was find some poor sucker to break my Benji, but then funny story: It turned out this  guy named Miguel saw me stash that bill–I don’t know how. I came back from a meeting one  night and my Benjamin and Miguel were long gone (you best believe I dismantled that lamp and put it back together all tweaker style).

There is no doubt in my mind that Benjamin Franklin got Miguel mighty high that week. To make matters worse, I couldn’t say a word to staff, because then they would ask me where the money came from, and I wasn’t about to unravel all my secrets, lies, and manipulations–at least not then, that came later in the show. So fade/flash to me asking random strangers if they could spare a dime…

But enough about me… 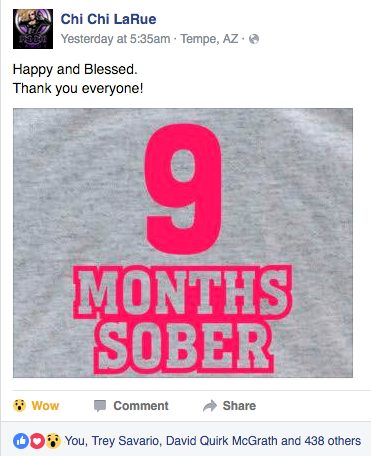 This past weekend marked 9 months of clean and sober time for Larry Paciotti a.k.a Chi Chi LaRue and I could not be happier. Larry has managed to keep Chi Chi in check and Chi Chi has managed to continue DJ-ing at bars and she is somehow making it work with her sobriety intact these past 9 months. We all have our own journey, our own experience and we’re all fighting our own fight. It took what it took and hopefully she’s had her take and will stick around for a long, long time…as in till the end of her time, because the goal here is to ride and die clean and sober.

Anyway, I wanted to interview Larry for The Fight magazine this past September for Recovery Month, but Chi Chi wouldn’t let me speak to Larry. So here is my Q&A with Chi Chi LaRue in case you missed it.

Every day we wake up sober is a fucking miracle. Keep fighting the good fight. Surrender to win. To keep it, you gotta give it away. And la-di-da-di.

Larry Paciotti, aka Chi Chi LaRue, recently out of rehab, on hitting rock bottom, lifelong commitments and being a better man.

How do you feel at this very moment?
Right at this moment I feel happy, joyous and free. That may be a little clichÃ©, but it's true.

How much sober time have you accrued as of this interview?
Today is 65 days.

Have you tried to get sober in the past?
I have tried everything from white knuckling it, to doing 90 [12-step] meetings in 90 days. I went to Florida and spent 30 days living in a hotel and immersing myself into the sober community. I thought I had it after a year, but when you stop working the program, the disease grabs hold. It's always waiting, cunning, baffling, powerful and patient.

What happened during your previous attempts at sobriety and why is this time different?
I was lying to everybody, including my amazing sponsor Greg, all my sober family, my friends, my business partners and more importantly to myself. This time I had a horrific bottom and I was screaming for help silently on the inside and hurting myself on the outside. Thank God my higher power brought some much needed love my way in the form of an intervention.

Was your intervention anything like what you see in the television show?
Exactly like it. My friends and family had to go through a pre-intervention, which I'm sure was tough. They already had letters asking me if I would take this gift offered to me and my answer was yes-yes-yes to every letter. I was so ready and willing to go.

What was life like for you before you decided to get sober?
My life was complicated, or so I thought. I drank a lot and did drugs"”mostly cocaine"”before I had my gastric bypass surgery, but it didn't hit me like it did after I had it. I came to find out after I had the surgery that it happens a lot where people compensate and replace food with other addictions like shopping, drinking, etc. I was diagnosed in treatment as cross-addicted, so really anything in my life can become an addiction, like my addiction to Starbucks.

I was and am a chronic relapser. I call myself a slip sister. Things would be going really great for a while and I guess I would self-sabotage. I screwed up a lot of gigs and spent and lost a lot of money. I was falling down and hurting myself and hurting other people more and more frequently. I broke my thumb, my nose, and hurt my legs and my face a lot.

Being a female impersonator a.k.a. a drag queen"”hell, being a goddamn 55-year-old grown-ass man, you would think I would get a hint that the last thing I wanted to do was keep fucking up my face, body and health.

What is life like now that you've had some clarity?
The moments have been amazing. Going into treatment was the best thing that's happened to me in a long, long time. This is a lifelong commitment and I plan on keeping that commitment.

Is there any conflict between Larry Paciotti the person and Chi Chi LaRue the persona?
That was a big problem, because the two started to become one. I was losing the best of both of those people even though they are just one person. I truly love being both of those crazies.

How do the two of you co-exist in the realm of recovery?
One day at a time.

What was the public response like after you announced you were going to rehab?
Mostly, the response was positive, with a lot of love and support from many. Of course I had the people that said nasty things because they can and that's okay though, because everyone is entitled to their opinion. What other people think of me is none of my business.

What happened to you financially that made you decide to start a gofundme campaign to help pay for rehab?
I didn't open that up; my friend Kevin from Minnesota did. There's a very long story that I don't want to go into, that involves other circumstances on why I didn't have the funds to finish my rehab. I want to thank everyone who donated to the fund. It meant a lot and you helped me more than you'll ever know.

What would you tell someone who thinks they may have issues with substance abuse and wants help?
Anything is possible. Look at me, I tried so many times to get sober and I hope this time it sticks. If you want to get help, help is waiting for you. Go to a [12-step] meeting and try it out. It can be very scary, but you're definitely not alone in this mixed-up world of addiction. I hope that anyone out there that's struggling with addiction of any kind will seek help. If my story provides any comfort or help to even one person, then this journey I've taken was meant to be. I love a good God shot.