I gotz to admit that I dragged my ass to the pop-up free Elton John concert that took place today on the parking lot of the “historically significant” Tower Records building on the Rock-N-Roll side of Sunset Boulevard in West Hollywood. I told myself I was there mostly as a reporter, because this event is an ideal item for The City page of the next issue of The Fight Magazine where I contribute.

I’m a fan of his music, don’t get me wrong, and I know that he gives back to the community with his Elton John AIDS Foundation, and he’s a legend and a husband and father and whatnot, but Sir Elton John the shit-talkin’ crab ass, I can do without. I’m talking about all the mad smack he’s shot at other people in the music biz–and by other people, I’m mostly concerned about the wretched things he’s said about my homegirl Madonna over the many years.

I know, I know, I read somewhere that he and Madonna buried the hatchet. He approached her at a restaurant recently, apologized for being a wretch and he bought her dinner, or so the story goes. Not that he needs it, but his peace offering made headlines during a time when he’s pushing a new album and he’s out on tour to back it up. I’m happy he apologized to M, but that just means he’ll aim his venom to other umm…singers… like… Janet Jackson. I read he recently said that he’d rather see a drag queen show than watch Janet Lipsinc. It’s like, seriously? What did drag queens ever do to Sir Elton for him to go there?

Anyway, I braved the heat to get my photo of Sir Elton singing for my City page. I wore my black mesh Madonna Rebel Heart Tour tank top to let everyone know what gang I was in, which got me clocked and called out by one of my friends who spotted me in the crowd. 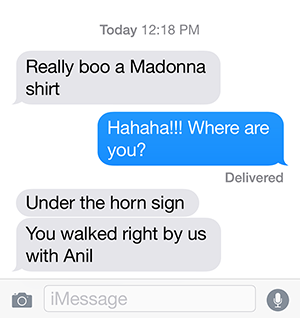 Getting my shot proved more challenging than I expected.

The street was packed with people. It was impossible to see over all the bobbing heads–not that there’s much to see at an Elton John concert, lets-be-for-real-here, but I wanted to get a picture of him. I thought I saw him standing on stage, so I aimed my zoom lens and started snapping away, only to realize the man was the umm…wrong size. There was that, and he was playing a guitar. Then I heard the distinguishable piano set and I knew I had the wrong guy.

Ugh! I couldn’t see him. I moved up Horn Avenue, off of Sunset Boulevard and wiggled my way towards the front of the side gate overlooking the Tower Records parking lot. People parted for me when they saw my professional camera, which I thought was funny.

And there he was. Facing me. Sitting behind a grand piano. Playing for free to a crowd of thousands. 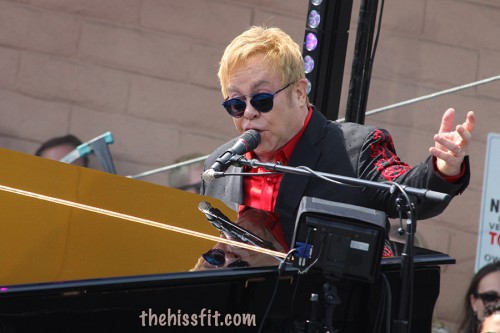 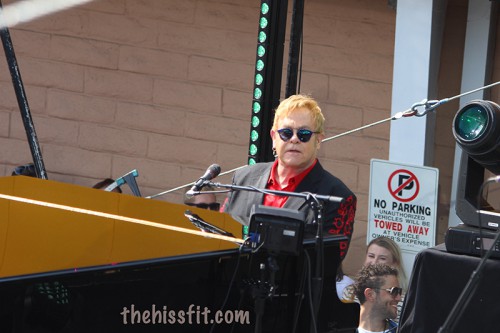 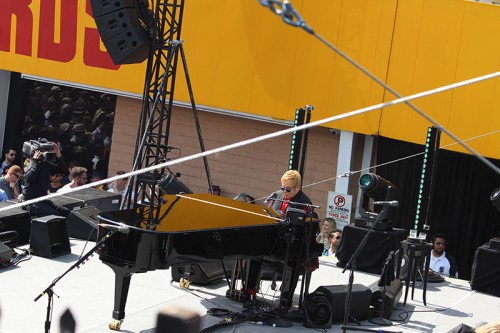 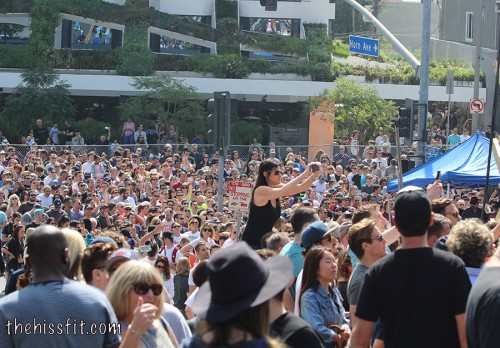 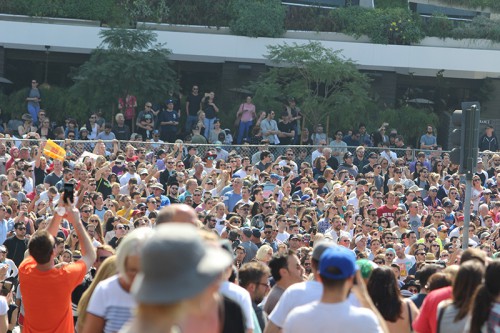 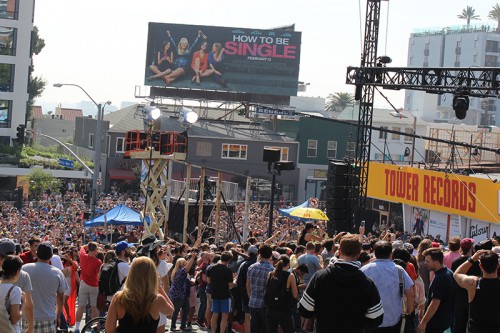 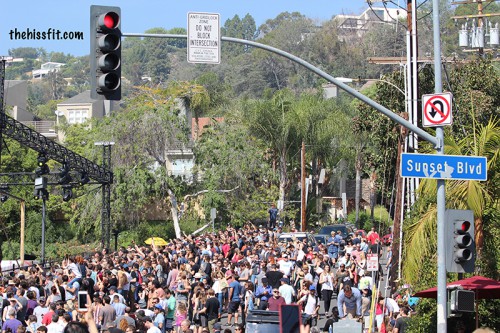 According to reports, those of us present owed this live musical treat to the City of West Hollywood for all their support of Sir Elton during his annual Academy Awards viewing party at the Pacific Design Center on San Vicente Boulevard, which raises funds for the Elton John AIDS Foundation. The event takes place every year on Oscar night.

I don’t have to, but I’ll admit it: there is no arguing with the happiness that I witnessed on the street today. The crowd was very mixed, with children and dogs and grandmothers enjoying the music. It’s not the frisky gay scene one would’ve experienced back in the dayz when Elton used to shop at this very Tower Records store, but I have to give up, his music made the people come together (evil grin). The crowd and their response to his classics were something to behold. The sound was on point. He did not miss a beat or flub a note. I was impressed. It made my rebel heart melt. OK, so the mood was contagious. I was happy to be there.

I got my photo. I got several shots of the crowd and as I much as I enjoyed listening to the sounds of my generation and the generation before me, I decided to cut out a little early, because I had an article to post.

It was on my drive home that my phone started blowing up. Turns out I left right before Lady Gaga came on to do a duet of “Don’t Let the Sun Come Down on Me,” which is my favorite Elton John song (the one with George Michael, of course)–again, I’m not the biggest Gaga fan, but I wish I had been there to witness that. 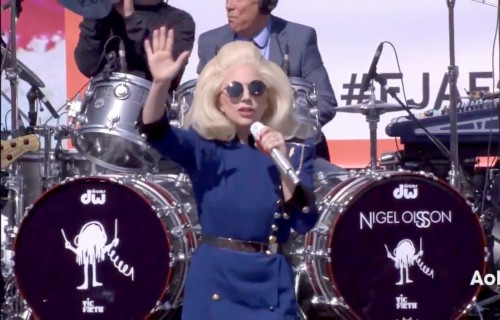 It was an amazing show. People will be talking about this for at least another day. But you know what the very best part about this concert is? We got the Tower Records concert experience for possibly the very last time. I believe the building is scheduled to be demolished for retail in the bottom and condos on top, on account of this is still West Hollywood, like hello. 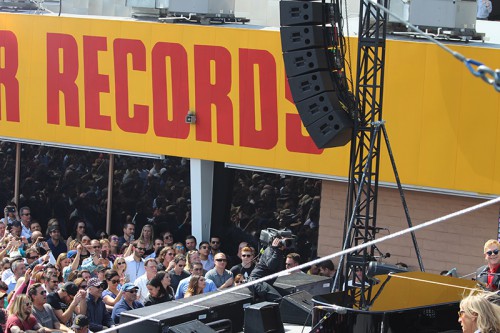 Elton John has a new album called “Wonderful Crazy Nights.” In all honesty, I probably won’t buy it, but maybe you should. I’m sure it’s good.

***UPDATE***
A source tells me the Tower Records building is not being demolished. It has a new 15-year lease with Gibson Guitars. Not sure if they’ll keep the Tower Records logo on the building, but at least it has a lifeline for another 15 years. Thank you Jerome Cleary.