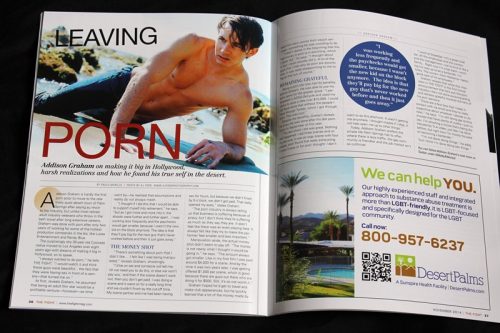 One never knows what to expect when dealing with people in skin flicks. I don’t want to say that I was surprised to hear a deep, masculine, and even keeled voice on the other end of the phone when I conducted my interview, because truth is, I didn’t know the first thing about this guy–yet like the rest of us I had my ideas simply because I’m quite familiar with this guy’s private parts.

Anyway, space is limited where print media is concerned.  Below is my full Q&A with Addision Graham. Be sure to follow him on twitter:  @AddyAddicted

What’s a guy like you doing, living in Palm Springs?
I came here because Los Angeles is very expensive. Palm Springs has a very strong gay community that I find appealing. I left go-go dancing when I left Los Angeles and I hoped to get a job at a bar, which I ended up doing. It's so much easier here than LA. Traffic is easier and the gym is less crowded. In LA, I got to a point where everything stressed me out.

Where are you from originally?
I'm from Colorado. I went to Valencia for college when I had just turned 17. I graduated in 2005 and moved to LA. It's been 8 years since  I lived in los Angeles, so I felt like a local.

What’s it like living in Palm Springs?
It's definitely an older crowd. 50 is considered young. I'm 30, so I'm definitely young and I kind of enjoy that, considering the people who live in L.A. are 18-21, it's better being the big fish. I do see some young guys around, but I don’t see them out too much. They may go out to Hunters, if they go out at all.  life here is easier and a bit more accepting and more relaxed.

What are you doing to support yourself?
I work at a bar called StreetBar. It's a great bar. All the employees and the owners and the management"”we're kind of like a family. Everyone gets along. It's really a local bar. There's no dance floor, or go-go dancers. It's really a place to come have a drink and hang out. I don't got to places like Motherlode or Gold Coast, because my idea of those places is that they're kind of trashy. Our bar has big windows. It's not dark or dingy. It's nicer. Coming from LA, it's so crazy to me, but they have a vodka special every day. Grey Goose will be $6.00. They have specials on Kettle One. No one does that in LA. 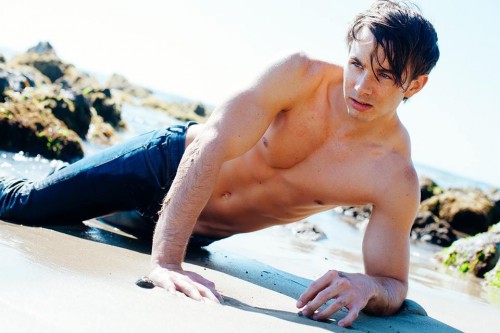 What's it like seeing yourself having sex in a movie?
I think it's sexy seeing myself in a movie with a sexy guy, but for the most part doing the videos are not sexy a lot of times. I'm trying to do the moaning sounds that they want you to make, which are totally unnatural for me and actually make me dizzy, or they're trying to get me in terrible positions that are hard to maintain, so your legs are falling asleep more than you're having a sexy time, but occasionally, there are some sexy stuff that happen and I'd watch a video and remember it.

What was the money like?
I thought if I did this, that I would be able to support myself into retirement, but as I got into it, the shoots were further and further apart and I was working less frequently, and the paychecks would get smaller, because they sort of argued that I wasn't new anymore.   The idea is that they'll pay big for the new guy that's never worked before and then it just goes away.

The money is not nearly what I thought it would be going in. The amount always got smaller.   Like in my first scene I was paid around $4,000 for a scene.   And by the time it was two years later, I was getting offered $1,000 per scene, which is good because there are guys out there who are doing it for $500. Still, it's so not worth it.

It wasn't worth the trouble. You have to be in great shape. You have to travel, like when I had to New York, it was hell, and then being on set and there's the douching. And what’s funny is that I got this reputation as being a big bottom. I do like to bottom, but I don't like to bottom for huge penises for long periods of time. I didn't like to fake the moaning and it just didn't seem worth it.

I still make these gay erotica movies that have plenty of nudity just no sex in them. I'm shooting a movie that's being distributed by TLA video, just like I've done before, but right now I'm really focused on becoming a bartender. Being in Palm Springs, there are photographers that I can work with, so it's not over. The photo shoots are easy. A photographer has a camera. I show up and there we go.

There are people who like my movies, but the ones who talk to me on Twitter are really friendly. It helps me to keep going. It's very valuing to do something that people appreciate. A lot of times people will give me praise about being beautiful and all that stuff, which is really hard to take a compliment, but I'm really just another guy. I wish I could tell the people who put me on a pedestal that they're great too. I've never found the right words to tell them that, but I always wanted to communicate that I always felt, ugly, unsexy, uninteresting, and on the low end of the totem pole, and the boys that I liked, didn't like me back ,and all that crap, so just because I'm in photos that have been Photoshoped and whatnot, doesn’t mean that there's some sort of hierarchy where I'm above and their below. I wish I had the words to lift people up, instead of keeping them down. Maybe one day I'll find the right words that can convey that message.

What do you think the future holds for you?
I'm trying to figure that out. There is a person in town who is talking about shooting a movie of his own and having me involved. I thought about trying to act in the local theater. I thought about getting into production with video and maybe doing work behind the camera. I haven't settled on one thing, which kind of opens me up. I'm not done doing things, but I think I'm done doing sex things.