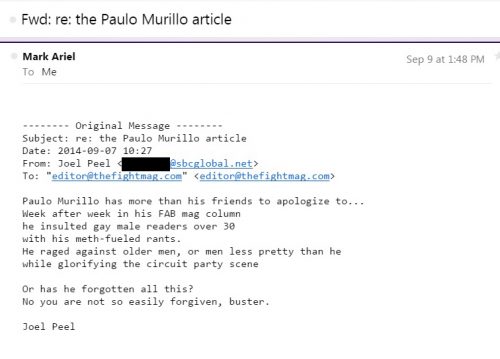 Fab newspaper folded on September of 2006.  I actually got the news September 5, to be exact.  I remember being taken out to dinner at Jerry’s Famous Deli in WeHo (now closed) and I was gently told that the last column I submitted called “Corporate Gays” (where I let ‘er rip about what it was like working for a closeted, yet flaming boss) would not see the light of day. 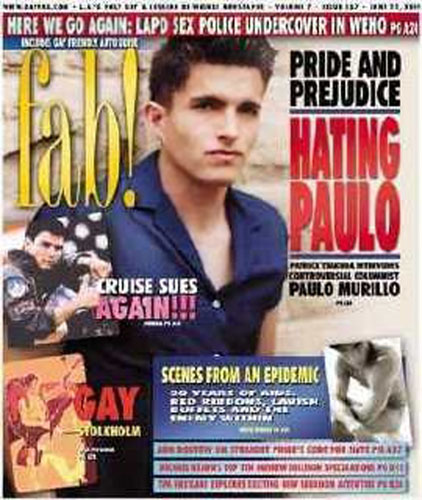 I wrote the last “Luv Ya, Mean It,” column 8 years ago, people!  And my ass is STILL  getting hate mail 8 years later.

Below is a response to an article I wrote about making amends for The Fight Magazine this month.  The piece is mild, by Queen of Mean standards, but that clearly does not matter:

“Paulo Murillo has more than his friends to apologize to…
Week after week in his FAB mag column
he insulted gay male readers over 30
with his meth-fueled rants.
He raged against older men, or men less pretty than he
while glorifying the circuit party scene

Or has he forgotten all this?
No you are not so easily forgiven, buster.”

“Or has he forgotten,” Mr Peel asks of me, and I’m like, how can a bitch forget being a bitch when you keep reminding a bitch?

I don’t mind the reminder so much.  I mean, it’s annoying as all fuck that this man is dropping his cheap two pennies, even though I can tell he clearly did NOT read the current piece in The Fight, but whatevs.  That’s always been a common drill where my writing has been concerned.  People don’t read, they just react.

What really yanks my ass hair in this letter to the editor is the part where I get dismissed and my seven or so years of writing material gets reduced to “meth-fueled rants.”  It’s no secret that I…um, had my problems, but a meth-fueled rant suggests I did a bump of crystal meth and let the speed ball do the clicking on the keyboard to produce my columns.  It totally removes me from the process which cannot be further from the truth—ummm, NEWSFLASH, it took a lot of time, energy, effort, and concentration to offend as many people as I possibly could in a 1,000 word-count page (evil grin). I took no prisoners, but that also included myself.

I’m sorry to disappoint, but I was more prone  to pop in a Lil’ Kim CD to bust some literary caps, before I crushed some lines on a mirror and used meth to fuel my muse.  I would NOT have met a single deadline if meth was my fuel, let’s-be-for-real-here-people, because nothing crashes and burns faster than fuel from crystal meth.

And speaking of blurry lines…singer Robin Thicke made headlines this week for claiming he was high and drunk in all of 2013 and he blames being high and drunk to defend any comments he made that implicate him in a lawsuit against him by Marvin Gay’s family who contend that Thicke’s “Blurred Lines” song is a total illegal rip-off of Gay’s “Got to Give It Up” hit.  Hey, don’t blame Thicke, he didn’t do it and he doesn’t remember saying it, it was the drink and the drugs (it would explain the puffy look he was sporting in 2013).  The drink and the drugs are to blame.

I am no Robin Thicke.

I have never ever, ever, ever, EVER, EVAH used meth fuel to excuse or defend my ratchet behavior–especially when it comes to anything I penned in the crazy years.  I take complete total and utter ownership of those columns and I don’t apologize for describing a way of life back in the dayz when I found my unscrupulous way of living way funny (admit it, you loved it also).

Obviously, there are things that I did, or didn’t do that I should’ve done that are a direct result of my drinking and using, but I take full responsibility for my drug use and Lordy LORD knows I try to amend my past behavior by simply changing it.

However. All bets are off where my writing is concerned.

I’m not one to respond to hate mail, cuz I like to think that I’m above it, but considering it’s been a whole 8 YEARS, I’d like to suggest that Mr. Joel Peel take his meth fuel comment and ram that shit far up his ass.

Where I come from, that would be called a booty bump.