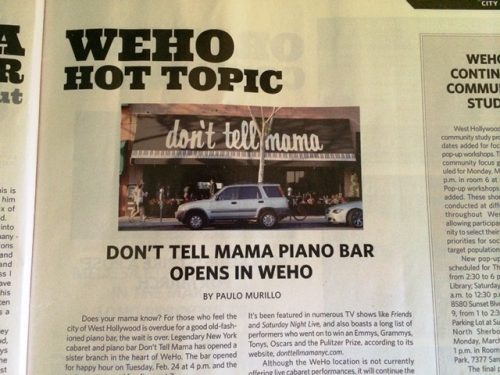 It’s no big shocker to me that Don’t Tell Mama Cabaret and Piano Bar in “Los Angeles” is closing after being open for a year and some change.

I pitched to write about their grand opening for the WeHo Hot Topic in Frontiers magazine back in February of last year.  I’m not much of a show tunes queen, but a lot of my close friends are, and I have to admit that I was kind of excited to see a new space open  at 8279 Santa Monica Blvd that aligned itself more with Capone’s piano bar, which I used to attend to flirt with the old farts that were regulars there back in the 90s.

I walked up Santa Monica Blvd to get a picture or some kind of quote for my piece from someone working there and the snooty manager straight up turned me away.  The place was completely empty, I was offering them free press and the impression I got was that they were above it and they didn’t need it.  The asshole there would not let me take a single photo–not of the piano, or their logo, nor would he give me a quote.  It wasn’t like he was sorry he couldn’t help me because of company policy and yadda-yadda.  He gave me a deadpan look and basically treated me like a trespasser and turned me away.  Other business owners continuously hound me to get some form of write-up or free press, and here this asshole was showing me the door.

I had already committed to writing the piece, so I had to settle for a picture of the exterior and put my personal feelings aside to give them some kind of plug.  But what do you think I told my friends after my little encounter that day before they opened their doors?

Then came the reviews from people I knew who wanted to love the place, but they complained that the food was too expensive, it wasn’t that good and the place had a bad New York attitude.  I also never understood why it insisted on calling itself the “Los Angeles” location when it was practically located across the street from West Hollywood City Hall.  I’m sorry, but the place seemed doomed from the get go.

I wrote the article.  But of course, I never set foot inside that place again.

Bitch shoulda given me that quote (grin).