Here’s an article I wrote that has been published in the latest issue of The Fight Magazine.  I’m throwing it back–waaayyy back to my first White Party weekend in the early 90’s during a time when it took big balls to look so cheap and be so openly gay.

I WANT TO SAY THE YEAR WAS 1992, but it could've been "˜93. I was under 21 and still living with my parents in Inglewood when I first hit up Jeffrey Sanker's White Party weekend in Palm Springs"”back in the early days when White Party was held at The Marquis Hotel. The weekend didn't offer more than the White Party and some pool parties, which seemed huge at the time.

I remember I lied to my mother and told her I was going camping with a bunch of my straight friends for that weekend. I had just come out to myself during a time when it was hard to be openly gay. You got beat up for that sort of thing back then"”whether it was at school, on the street, or at home"”it wasn't safe. My friends and I also came out of the closet and stepped into the dark shadow of AIDS. A lot of people had died. You felt it. Young gay guys have it so easy these days. 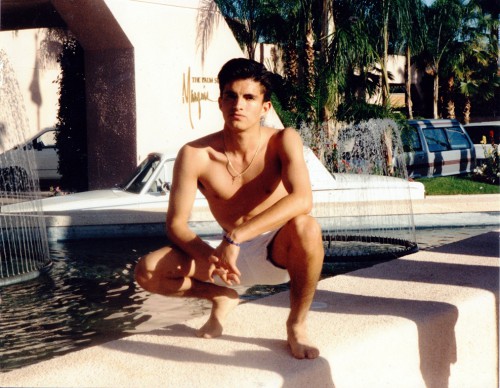 BOY CRAZY
It was also an innocent time. My friends and I had not discovered drinking (yet) and we wouldn't dare do drugs (yet), but we were boy crazy as all hell and we were hell bent on getting some at the White Party weekend in Palm Springs.

Six of us made the three-hour drive to the desert in two separate cars. I made sure to pack my X-Skinny, which was this black skimpy bikini that I proudly purchased at International Male in WeHo.

The energy surrounding the Marquis was fun, exciting and new. Alas, the only camping we did that weekend was outside of the big WP event. We weren't old enough to get inside, so we just watched a parade of gay men all dressed in white, disappear like ghostly figures into a room that exploded with bright lights and deep thumping sounds. 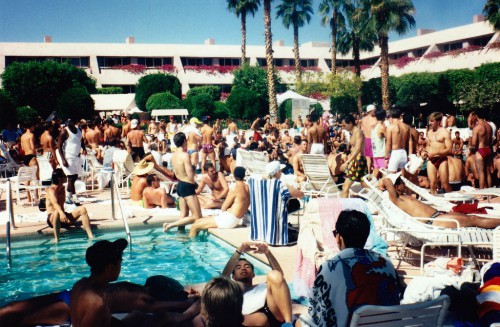 The city of Palm Springs had a bad rep as a party city at a time when straight college students went ape shit and tore the city up during Spring Break. White Party weekend was a more private affair, with the same-sex fun under the sun tightly kept within its confines. The pool parties were open and free to everyone. They didn't serve alcohol, so there was no danger of being carded. Hanging out by the pool was probably the most memorable part of our trip.

I remember walking out in my X-Skinny, and-horror of horrors-I ran into my swimsuit, which crisscrossed around way hotter bodies than the pale twink business I had going on at the time. Many men lost their bikini bottoms at the bottom of the pool as the day wore on. It was so damn hot, they threw giant blocks of ice into the pool and we all took turns trying to ride it like a mechanical bull. My mother would have dragged me out of that water by my hair and gave me the thrashing of a lifetime, right in front of everyone, if she had seen me carry on in a pool full of naked maricones. 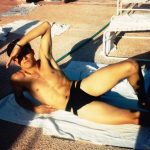 Then my dumbass decided to leave the safety of the pool to go buy a pack of gum down the street. I asked my friend Steven to join me. I thought nothing about walking out into the open streets in my X-Skinny, with flip-flops and a mesh tank top"”also courtesy of International Male. I figured Palm Springs was a party town and no one gave a shit. Then traffic came to a complete halt and hetero fucks screamed "FAGGOTS, FAGGOTS!" Women gasped, and I recognized some gay guys who detached themselves by turning the other way. "Fuck you faggots," they screamed angrily from all directions. We only made it half a block before turning around and making a mad dash back to the safety of the Marquis. Today, they would have rushed me to take my photo and then posted it on Facebook, so the entire world could get an evil laugh, which is like way worse than getting your ass beaten. Steven will never forget how I almost got him killed that day. Good times.

Of course, I would grow up and go back to the actual White Party a few years later. White Party also grew into massive proportions. Looking back, I've been to WP six times in my gay career, which is a lot for someone who has griped about it in the past. I've had some great White Party moments and a lot of fuzzy ones in between. I've gotten into a shit load of trouble and I've blamed everyone under the hot desert sun for my ratchet behavior.

I haven't been to WP in almost ten years. I'm scheduled to go back for this year's 25th Anniversary celebration.

Today I'm sober, I have a boyfriend and I have braces in my face, so I'm not getting too worked up over it (much). I'm sure the weekend will be epic, but I will never forget my first White Party weekend. I had no kind of game, so I didn't get any, but it was probably the most fun party moment I ever had in my life.

Be sure to pick up a copy of The Fight Magazine, which is out like right now! 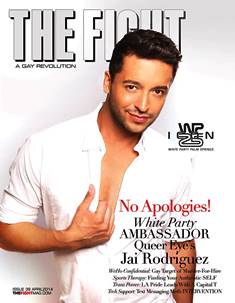