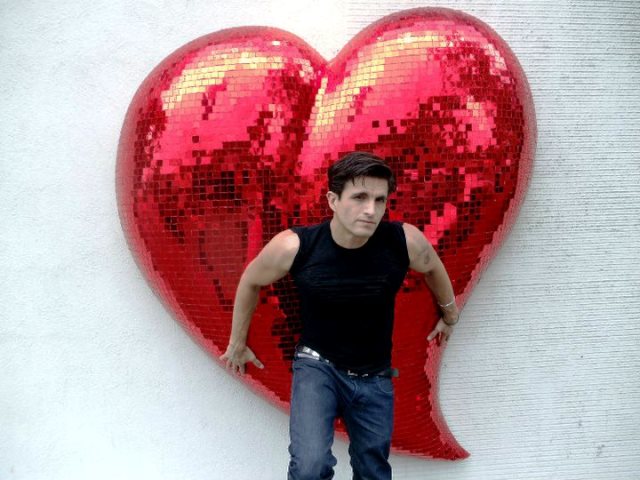 I was going through it.  My ass was completely spun out after THE very worst breakup I’ve ever experienced in my entire gay career–actually the breakup wasn’t so bad (that relationship was sooo over); I would’ve been fine, until the morning after when I found out the new ex had himself a new boyfriend 24-hours after he dumped me.  Of course, I was forced to behold the fact that his new boyfriend just happened to be the same bitch who had been a suspect and a subject of arguments for months before the split (coincidence?  I think not!), so you best BELIEVE my ass was up against it.

I reckon, there’s no deeper wound or harder hurt than the pain that’s attached to a busted ego.  Just…like…THAT, those two fuckers changed my social standing from an Angelina Jolie to a Jennifer Aniston.  And no bitch wants to be the Jennifer (sorry Jen).  I admit I was embarrassed by where I placed in that dumb little drama.  My shame sensors were all flared up like a hemorrhoid and I needed to Preparation-H that shit out of my head desperately.

So along comes this hottie with a busted leg.  I ran into him at the Big Gay Starbucks in WeHo.  I actually almost tripped over his crutches while I rushed to get a table.  I didn’t know this guy too well.  I wouldn’t say, I had a crush on him, but I couldn’t deny he was handsome and he had a nice body, if muscular guys are your thing.  Of course, I looked down at his plastered limb and asked him what happened, even though I seriously could not give a high flying of the fucks–I had too many problems of my own.  His leg broke; I forget how.  He told me about his daily struggles and how taking out the trash was impossible in his gimpy state and how his apartment was a mess and I’m sure you know where this is going.

We shouldn’t want to help people based on the way they look, but if you’re going to be of service to someone and that someone happens to be attractive, then that can’t hurt, can it?  It’s a win-win.  I seriously didn’t want to, but I offered to stop by his place and help clean his apartment, even though my own place was full of heartbreak, betrayal and neglect.

I showed up at his home ready to be of service the following day.  I had the movie “The English Patient” in my mind on my way there.  I couldn’t help it.

The guy lived in the second floor of a WeHo apartment (poor baby).  I found him lying on a couch in front of the TV.  He was hugging a giant-sized bag of Doritos.  I’d rather not describe him, should he be reading this, but he’s a sexy little fucker and he kinda knows it.  The plastered leg leaned stiffly over the edge of the couch and the good leg was spread wide open.  He wore dark boxer briefs that were crunched around his groin and of course, he was shirtless.  My wires immediately got crossed from “The English Patient” to a really bad 90’s porno movie.  I couldn’t help it.

Then the unexpected happened. We had barely exchanged hellos, when the guy raised his good leg high up in the air, and he unleashed a very loud–I’m talkin’–very obnoxious fart.  I kid you not.  Then his face distorted and he forced out an equally disgusting burp that was straight out of a frat house movie.  It was so wrong, but not nearly as gross as when he roared a gay sounding “WERRK” after the fart and burp.

My. Face. Fucking. Cracked!  Bitch, we don’t know each other like that!

It was like being lashed on the back with a wet whip and told to get to work.  I was there to be of service, nothing more.  So I got to work.  I tackled the dishes, took out his trash, put in a load of laundry and even went as far as cleaning his bathroom.  I tried to talk to him about my trials and tribulations, but this guy was a little dim.  I continued to work in silence.

Then he did it again while I was mopping his kitchen floor.  Out one hole and then out the other: Fart. Burp.  And that disgusting, “WERRK!”  I wanted to kick his bad leg, or break the good one–it was so fucking rude.  “See, this is why I hate helping people,” I thought to myself.

After the third fart-burp-and-“WERRK,” I had to reach out to someone in my support group.  I hid next to his refrigerator and sent my friend Danny (not his real name) a text message that went something along the lines of: 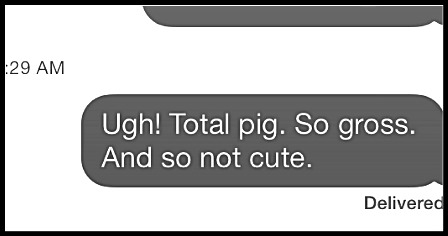 I few moments later, I heard the guy’s phone go off in the living room.  It made that sound that phones make when phones get a new text message–CLINK!

I looked down at the mean text I had just sent and–horror of all HORRORS–I did not see Danny’s name as the recipient of my text.  I accidentally sent the text about the gross pig to the actual disabled, gross, farting/burping pig sitting only a few steps away from me.  The evil text was coming from INSIDE THE APARTMENT!!!

The proper thing to do would’ve been to say nothing and let me off the hook, after all, I was helping this a bitch out, but this guy did not possess a single hair where propriety was concerned.  You best believe the bitch straight up called me out.

“Did you send me a text by mistake?” He immediately asked.  “Are you talking shit about me?  Saying I’m gross?”

“Oh, I was texting my friend Danny.” I offered weakly on the fly.  “He just told me that he whacked off, so I was calling him gross.”  Then I had to include (with a cringe, I might add), “I think you’re way cute.”  I don’t know where or how I came up with that one, but you best believe that Danny was none too pleased when I told him how he was thrown under the bus.

I’m not sure if the guy believed me; my guess is he used my weak compliment as narcissistic fuel, but he didn’t fart/burp and go “WERRK” for the remainder of my shift.

I will say this: Helping that disabled guy, texting shit about him and then getting caught, really got me out of my head.  It worked!  I forgot all my troubles and woes, if only for a moment.  And no, I did not go back to help him clean his house again.

Regarding that relationship that ended so badly: The bitch I was dumped for was dumped a whole three months later.  Just…like…THAT he went from an Angelina to a Jen (pity).