I know I’m not supposed to love and relish and point a finger and laugh at the misfortunes of others–especially when someone loses his job, for the unemployment line is no laughing matter in these here tough times, BUT in Piers Morgan’s case I’m willing to make an exception, on account of I always found him to be an overgrown blowhard and a pompous prick.

Truth is, what I mostly find to his discredit is his relentless and wretched hatred for all things Madonna.

OFF WITH HIS HEAD!!!

I’ve been DYING to blog about this since news broke out the other day that the Pierce Morgan Live will be cancelled like a snowed in flight in the Midwest.  A lack in the man’s popularity has resulted in very sad, very poor ratings–forcing CNN to pull the plug—and what did the network expect?  The man has proven himself to be mean, humorless, judgmental and full of himself without a redeeming quality that would establishing him as someone with any room to talk smack.

A shit load of people have a long list of reasons why they don’t like Piers Morgan.  He may, or may not be guilty of voicemail hacking.  He may be unpopular for his anti stance on gun control or his love of football (with the round ball).  He may, or may not be a transphobe and he may, or may not have had pointless feuds with a long list of celebrities, but it’s been his relentless, heartless attacks against Madonna that put him in my shit list of people who I would never tune in to watch on TV, or bother to so much as fart on if I saw him walking down the street.

The man makes me retch.

He’s made fun of Madonna for being old, he’s called her disgusting, a bad mother, desperate, a terrible singer and has gone on endless rants about his hatred for her and he’s displayed a level of arrogance that would be his undoing when he would reiterate how she was banned from his show, like his show was all that (it was not).  And-and-AND…he dared to speak foul about her appearance while he always sat there looking like a pinkish bloated toad from an old Budweiser Super Bowl commercial—"She's a complete con artist and those arms are just terrifying,” he’s been quoted as saying.  "It's like watching Conan the Barbarian. She's looking even more barbaric than ever at the moment, utterly grotesque.”

That fucker goes for her throat: 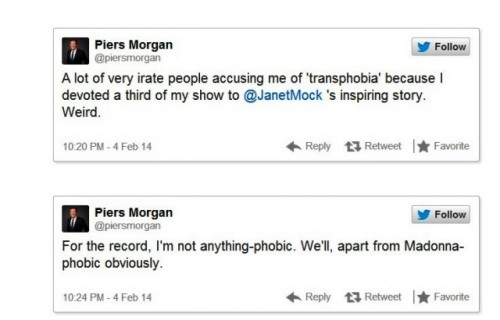 I know it’s in vogue to dog the big M (no pun intended).  People love to rag on Madonna nowadays, even those who lit a candle for her and held it up for almost 30 years, but what I found most annoying about Morgan’s Madonna venom was that it sounded personal…like he knew her…like they were equal…like she gave a fuck.

Clearly, she does not.

You wanna know what Madonna had to say in response to his countless insults?  It went something along the lines of, “Never heard of him.” —SNAP!!!

And now the show is over (pity).  I totally called the show’s demise in a blog I wrote back in July 26, 2012, when M flashed her boob during her MDNA Tour.  Of course, he lashed out at her tit.

“Morgan goes for Madonna's throat constantly and unprofessionally and is very vocal about his bitterness toward her because his sorry ass was cheated out of a scoop from M's camp way back when Madonna was pregnant with Lola.  He was one of the first to cry FOUL and FAIL when Madonna recently flashed her tit at her tour, calling her act desperate and saying that she's too old.  Of course, he only goes there because he knows how the system works.  From where he sits, he's allowed to age like Larry King (alas, his delivery is boring and he is lacking the class act that was Larry King; I predict his show will sink in the US way before Madonna's tits)"”the biggest shit-kicker about Piers Morgan is that I wouldn't know anything about his existence, nor would he have any business in this here Hiss Fit, if he had not uttered the words ‘Madonna.'”

I know I shouldn’t make fun of the demise of the Pierce Morgan Live show.  This joyous moment will cost many people their jobs, but those heads will roll at the hands of pompous prick who simply refused to play nice. 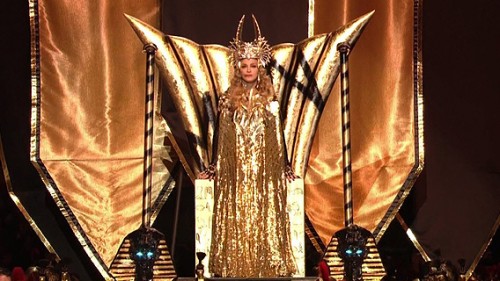