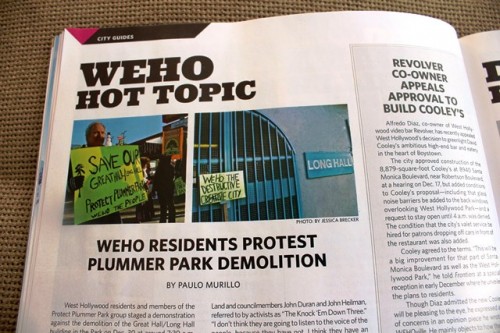 Hello darrrlinks.  Below is the latest WeHo Hot Topic for Frontiers Magazine.  I try my damndest (not a real word, I know) to be objective.  Whether you think a dance between Plummer Park’s Great Hall/Long Hall and a wrecking ball is long overdue, or you are like most West Hollywood residents who feel the historic building should be saved, tonight is your chance to be heard.  The West Hollywood city council is expected to vote on the future of Plummer Park.  Regular meeting starts at 6:30pm at the West Hollywood Park Public Meeting Room – Council Chambers at 625 N. San Vicente Boulevard.

The new issue hit the streets yesterday, so pick up a copy like right NOW!!!  The cover is way hot. 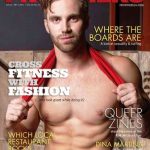 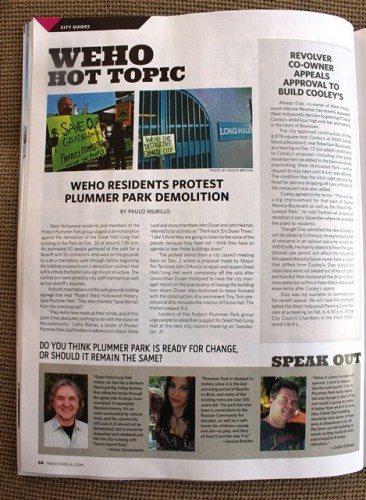 WEHO RESIDENTS PROTEST PLUMMER PARK DEMOLITION
BY PAULO MURILLO
West Hollywood residents and members of the Protect Plummer Park group staged a demonstration against the demolition of the Great Hall / Long Hall building in Plummer Park on December 30 at around 7:30 a.m.    An estimated 50 people gathered at the park for a faceoff with 10 contractors who were on the grounds to do a mandatory walk-through before beginning the bidding process to win a demolition contract that will bulldoze the historically significant structure.   The contractors were joined by city staff members as well as two sheriff deputies.
Activists marched around the park grounds holding signage that read "Protect West Hollywood History, Save Plummer Park." They also chanted, "Save the Hall from the wrecking ball!"
"They really have made up their minds and at this point it has absolutely nothing to do with the vision of the community." Cathy Blaivas, one of the leaders of Protect Plummer Park, told Frontiers in reference to Mayor Abbe Land, and councilmembers John Duran and John Heilman, referred to by activists as "The Knock "˜Em Down Three." "I don't think they are going to listen to the voice of the people because they have not.   I think they have an agenda to tear those buildings down."
The protest stems from a city council meeting back on Dec 2.   A proposal made by Mayor Pro-Tempore John D'Amico to repair and re-open Great Hall / Long Hall went completely off the rails after councilman Duran motioned to have the city manager report on the practicality of having the building torn down.   He also motioned to move forward with the construction of a permanent Tiny Tots preschool and to renovate the interior of Fiesta Hall.   The motion passed 3-2.
Leaders of the Protect Plummer Park group urge people to voice their support for Great Hall / Long Hall at the next city council meeting on Tuesday, January 21.
===
DO YOU THINK PLUMMER PARK IS READY FOR CHANGE, OR SHOULD IT REMAIN THE SAME?
"Great Hall/Long Hall makes me feel like a Barbara Stanwyck Big Valley Barkley Boy riding his horse through the gates into its large inner courtyard.   It represents Western history.   It’s an oasis surrounded by mature trees, and the community still uses it. It should not be demolished, but it should be respected and rehabbed just like the city is doing with Tara in Laurel Park." — Victor Omelczenko
"Plummer Park is steeped in history since it is the last surviving parcel of Rancho La Brea, and many of the existing trees are over 100 years old.   The park has also been a corner stone to the Russian Community for decades, as well as a safe haven for children, young and old, to play, and they all love it just the way it is. " "“ Jessica Brecker
"When it comes to redevelopment, I tend to always like the end results.   I think Plummer Park looks really old and change is due.   If the end result is going to make it better than what it is now, then I think that building should be torn down.   It happens in Downtown LA all the time"”an old building is saved, so they build all over and around it. It looks ridiculous."   — Collin O'Brien
DAY ONE ARTICLE FOR THE FIGHT MAGAZINE JANUARY 2014 RAINBOW FLAG CONTROVERSY IN WEST HOLLYWOOD