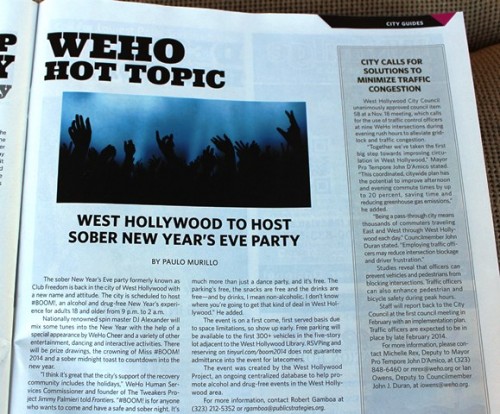 For those who choose not to drink on New Year’s Eve for whatever reason … there is also the choice of attending this sober New Year’s Party, which will hopefully be so well attended that it will be the launching pad for many New Year’s Eve Parties to come in West Hollywood.

Some people may scoff at the idea of a sober party to ring in the New Year (it’s like diet coke, or decaf coffee–what’s the point?).  I’m almost certain the naysayers won’t have much to nay say about during the morning-after hangover, or three-day crash and burn after a nasty drug run.  It sucks when the New Year starts a lot like the old.

Anyway, Pick up the latest issue of Frontiers Magazine which hit the streets this week. 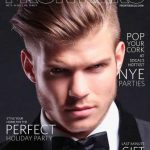 Check out the Latest WeHo Hot Topic below: 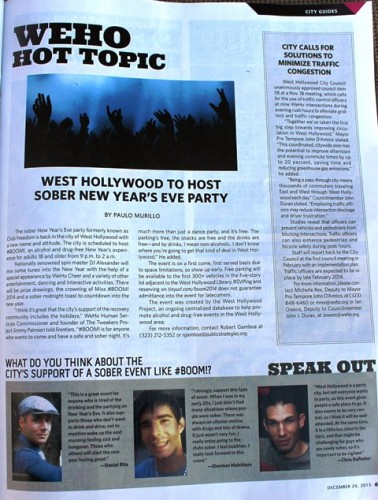 WEST HOLLYWOOD  TO HOST SOBER NEW YEAR’S EVE PARTY
BY PAULO MURILLO
The sober New Year’s Eve Party formerly known as Club Freedom is back in the City of West Hollywood with a new name and attitude.   The city is scheduled to host #BOOM, an alcohol and drug free experience for adults 18 or older,  on Tuesday, December 31, from 9 p.m. to 2 a.m.
Nationally renowned spin master, DJ Alexander will mix some tunes into the New Year with the help of a special appearance by WeHo Cheer and a variety of other entertainment, dancing, and interactive activities.   There will be prize drawings, the crowning of Miss #BOOM! 2014 and a midnight sober toast to countdown into the New Year.
“I think it’s great that the city’s support of the recovery community includes the holidays,” WeHo human services commissioner and founder of The Tweakers Project, Jimmy Palmieri told Frontiers.  “[#BOOM] is for anyone who wants to come and have a safe and sober night. It’s much more than just a dance party and it’s free.   The parking’s free, the snacks are free, and the drinks are free””and by drinks, I mean non-alcoholic. I don’t know where you’re going to get that kind of deal in West Hollywood.” He added.
The event is on a first come, first serve basis due to space limitations, so show up early.   Free parking will be available to the first 300+ vehicles in the 5-story lot adjacent to the West Hollywood Library.   RSVPing and reserving on  tinyurl.com/boom2014  does not guarantee admittance into the event for late comers.
The event was created by the West Hollywood Project, a coalition of the Institute for Public Strategies. The West Hollywood Project is an ongoing centralized database to help promote alcohol and drug free events in the West Hollywood area.
For more information contact Robert Gamboa at (323) 212-5352 orrgamboa@publicstrategies.org.
CITY CALLS FOR SOLUTIONS TO MINIMIZE TRAFFIC CONGESTION
West Hollywood City Council unanimously approved council item 5B at a November 18 city council meeting, which calls for the use of traffic control officers at nine WeHo intersections during evening rush hours to alleviate gridlock and traffic congestion.
“Together we’ve taken the first big step towards improving circulation in West Hollywood,” Mayor Pro Tempore John D’Amico stated. “This coordinated, citywide plan has the potential to improve afternoon and evening commute times by up to twenty percent, saving time and reducing greenhouse gas emissions,” he added.
“Being a pass-through City means thousands of commuters traveling East and West through West Hollywood each day.”   Councilmember John Duran stated. “Employing traffic officers may reduce intersection blockage and driver frustration.”
Studies reveal that officers can prevent vehicles and pedestrians from blocking intersections. Traffic officers can also enhance pedestrian and bicycle safety during peak hours.
Staff will report back to the City Council at the first Council meeting in February with an implementation plan. Traffic officers are expected to be in place by late  February 2014.
For more information, please contact Michelle Rex, Deputy to Mayor Pro Tempore John D’Amico at    (323) 848-6460 or  mrex@weho.org  or Ian Owens, Deputy to Councilmember John J. Duran at  iowens@weho.org.
SPEAK OUT
WHAT DO YOU THINK ABOUT THE CITY’S SUPPORT OF A SOBER EVENT LIKE #BOOM? 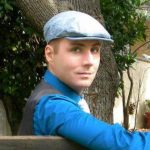 “This is a great event for anyone who is tired of the drinking and the partying on New Year’s Eve.   It also supports those who don’t want to drink and drive, not to mention wake up the next morning feeling sick and hung over.   Those who attend will start the New Year feeling great.” ““ Daniel Rita 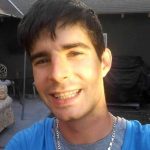 “I strongly support these types of events.   When I was in my early twenties, I just didn’t find many situations where people were sober. There was always an ulterior motive with drugs and lots of drama. It just wasn’t very fun. I really enjoy going to the clubs sober. I feel healthier.   I really look forward to this event.”   — Sherman Hutchison 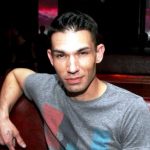 “West Hollywood is a party city, but not everyone wants to party, so this event gives people a safe place to go.   It also seems to be very central, so I think it will be well attended.   At the same time, it is a little too close to the bars and that might be challenging for guys that are newly sober, so it’s important to be vigilant.”   — Chris DePooter
FIGHT FOR YOUR LIFE – THE MAX PHOENIX EFFECT A BLACK FRIDAY THE 13TH FOR EDDIE’S BARBER SHOP IN WEST HOLLYWOOD