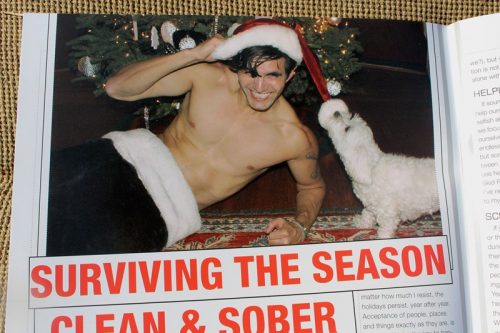 The following is a lil’ sumethin’-sumethin’ I wrote for The Fight Magazine, just in time for the holidays.

If you had told me ten years ago that–not only would I be writing about how to make it through the holidays clean and sober, but that I would also allow the publication of a photo of me frolicking with a white fluffy dog while wearing a Santa hat … I would have said you were high … and then I would have jacked you for your party favors.

The gift of desperation changes everything.

I do hope you enjoy this mental effort.  You know I hate to disappoint.

There are several ways to maneuver past the hysteria …   Relax, relate, release; it’s all a matter of perception.

Maintaining continuous sobriety during the season can be tough for those of us who have an allergy to eggnog or to a bump of crystal meth to the brain, but the holidays don’t have to be this horrible thing.   There are several ways to maneuver past the hysteria that comes with the high expectations, people pleasing and the pressures to be jolly-golly-not to mention the forced family gatherings and the social settings where people often get drunk.   Relax, relate, release; it’s all a matter of perception.

LOSE THE ‘TUDE
The first rule of thumb is don’t drink or use no matter what (duh).   It’s easier said than done, I know, but there’s an easier softer way of going about surviving the season sober, even when you feel alone and miserable because everyone around you seems to be so damn happy (they’re not).

For starters, try to avoid the toxic crazy makers in your inner circle.   They say your family knows how to push all your buttons, because they are the factory that installed them.   The same can be said about some of our friends. Most of us are stuck with family, but there’s no need to keep the frenemies around to add bitterness to the holidays-even if we like having someone to bitch with about stupid Santa with his stupid presents.   Spreading the salt can be fun, but those frenemies inevitably turn on us.   I say ditch the bitch.   It’s easier to maintain sobriety when we surround ourselves with sober people.   The same goes for maintaining a positive ‘tude.

SURRENDER TO WIN
I’ve never been a fan of the holidays and yet no matter how much I resist, the holidays persist, year after year. Acceptance of people, places and things exactly as they are, is supposed to be the key to happiness.   Sometimes it’s best to let go, or be dragged.   If we can’t embrace it, we can try to accept it.   We can’t exactly change the station playing Christmas music at our local Starbucks (or can we?), but we can change our way of thinking.         Unfortunately isolation is not an option for us sobers.   Time alone can lead to time alone with a drink. Sometimes you have to surrender to win.

HELPING OTHERS
It sounds dumb, but helping others is probably the best way we help ourselves.   Service comes up a lot in recovery.   Asking a bunch of selfish alcoholics to be selfless seems like a cosmic joke, but when we focus on the needs of others, we stop glaring a harsh light on ourselves.   Google the words “volunteer in Los Angeles” and the list is endless.   We don’t have to bend over backwards to save the world, but sometimes even the smallest gesture can make the difference between helpless to helpful. The Van Ness Recovery House can always use help distributing donated clothes and blankets to the homeless on Skid Row during Christmas Eve. It’s a life changing experience, I hear. I’ve never done it on account of I’m much too busy … (being of service to my family, people – I have a niece and nephews).

SCREW WHAT THEY THINK
If you come from an ilk of gays who cares about what others think, or think you can predict, change, control, manage or manipulate (redundant, I know, but I don’t care) what’s going on in people’s heads, then the holidays can bring great hardship. Whether we aim for the biggest, fluffiest X-Mas tree to try to impress the pretty sweater people, or we find drinking out of a bottle of Martinelli’s embarrassing when everyone else is sucking out of a bottle of Bollinger on New Year’s Eve, it’s important to remember that everyone is in their own head trip, tripping out over their own shit. To quote Miguel Ruiz from the book The Four Agreements, “Don’t take anything personally: When you are immune to the opinions and actions of others, you won’t be the victim of needless suffering.”

COUNTDOWN TO ZERO
To me, nothing symbolizes the march to a death toll like the countdown on New Year’s Eve.   Who wants to be sober for that nonsense?   On the other hand, the New Year looks a lot like yesteryear when we wake up hung over  on January 1.   Lucky for those of us who can’t drink because one drink is never enough, or one drink leads to a bumpy night, there are events we can attend during New Year’s Eve that will help maintain our sobriety intact.   Sober people everywhere have sober parties, or gatherings, but if you’re not soberly connected, the City of West Hollywood is throwing #BOOM, an alcohol and drug-free experience for adults 18+ on December 29, from 9 p.m. to 2 a.m., in the heart of WeHo (for more information contact Robert Gamboa at

SAY A LITTLE PRAYER
The holiday season, like everything else in life, is what you make of it. It can bring joy to the world, it can be one big bah humbug moment, or it can be just another day that comes and goes. If losing the ‘tude, ditching the frenemies, surrendering to what is, being of service, and screwing what people think doesn’t seem to get your mind off the boozing and using, a little prayer and meditation never hurt nobody, noway, nohow.

"Try to avoid the toxic crazy makers in your inner circle.   They say your family knows how to push all your buttons, because they are the factory that installed them.   The same can be said about some of our friends"¦"

The Fight Magazine is out like NOW, so pick up a copy today.