Eddie’s Barbershop in West Hollywood tried to make the very best out of a pretty messed up situation.  A drunk driver crashed into their establishment earlier this past Friday the 13th as I mentioned on this here hiss fit.

In response to the wreckage, the owner had a very large, very bold “Don’t Drink & Drive” message spray painted over their plywood window coverings and then posted pictures of all the damage that was done on the night of the crash, which I think is pretty brillz.

There was also a blow-by-blow explanation of exactly what went down that drunken night for the sake of nosy neighbors and curious pedestrians.  Not sure if Eddie himself wrote the signage, but clearly Eddie’s Barbershop was able to find some humor, despite the wreckage of the property.  I was going to type out the signage for you guys, but I’m way too lazy, so here’s a picture of the sign.  Read it yourself. 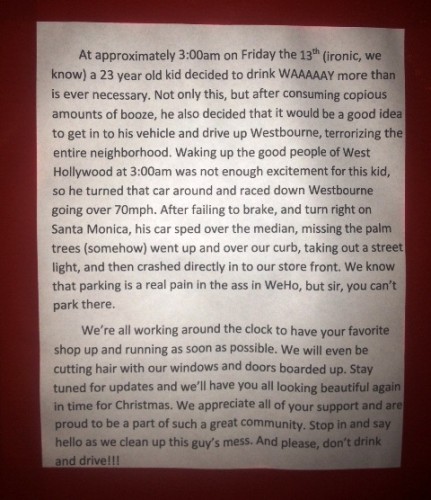 This Don’t Drink & Drive message takes me back to that wrecked car that’s parked in front of the WeHo Sheriff’s Station on the corner of Santa Monica and Robertson.  I always thought that mangled car would be more effective if they showed you photos of the carnage, or at least gave you a back story on the lives that were lost, or changed from the collision.  It may be a little gory, but it could give a name or a face, or more human value to the message of the dangers of drinking and driving.  Right now the wrecked car just sits there like an aluminum art sculpture. 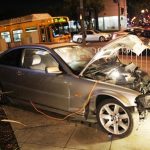 Anyway, as the sign reads Eddie’s is now open for business.  Hopefully this incident will bring them a shit load of business.  I plan to buy my KMS hair paste as soon as I’m done with the tube I have now.

Related articles across the web