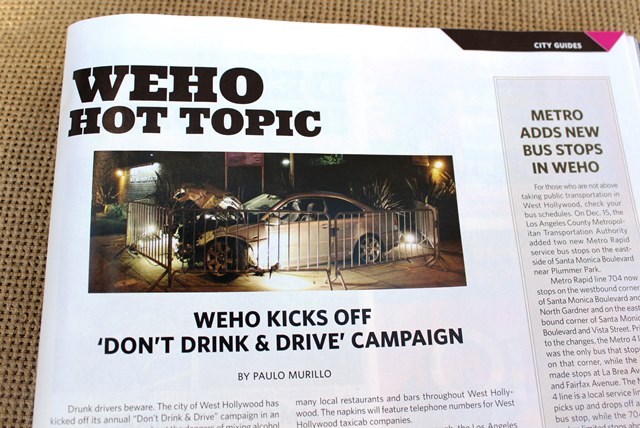 What are we NOT doing this New Year’s Eve?  Drinking and then driving.  It’s a no brainier.  The only thing worse than waking up on January 1st feeling dehydrated and hung over with a giant headache, is waking up hungover in a cell, or in a hospital.  It’s sooo not the way to start a New Year.

I wrote about the mangled car that’s on display in the heart of West Hollywood for the WeHo Hot Topic in Frontiers Magazine and then asked a few WeHo residents if that car makes a difference.  I still say the wrecked vehicle would be more effective if there was a back story to that car.  Who was driving this vehicle?  Who died?  Who survived?  Who is locked up and doing time?  It would add a more human connection to this mangled car, which kind of looks like a work of art.

Tonight is the night.  Don’t drink and drive and also keep an eye out for drunk drivers.

Drunk drivers beware. The city of West Hollywood kicked off the annual "Don't Drink & Drive" campaign to raise awareness about the dangers of drinking and driving during the holidays.
The West Hollywood Station of the Los Angeles County Sheriff’s Department, Los Angeles County Fire Department fire stations 7 and 8, the Sunset Strip Business Association, Block by Block security ambassadors, and local licensed taxi companies joined WeHo councilmember John Heilman for a press conference in front of the West Hollywood Sheriff's station on the corner of Santa Monica Boulevard and San Vicente.

Every year the city unveils the remains of an actual car that was involved in a drunk driving accident in front of the WeHo Sheriff's Station. This year a destroyed late-model BMW is on exhibit to remind drivers about driving drunk.

The city is also distributing over 200,000 drink napkins with "Don't Drink & Drive" messages printed on them to many local restaurants and bars throughout West Hollywood. The napkins will feature telephone numbers for West Hollywood taxicab companies.

If the wrecked car isn't scary enough, the Los Angeles County Sheriff's Department's Traffic Service Detail is known for conducting DUI checkpoints in West Hollywood. Checkpoints were conducted on the intersection of Robertson and Santa Monica Boulevards on Friday, December 13. A major component of these checkpoints is to increase awareness on the dangers of impaired driving and to encourage sober designated drivers.

The city offers transportation alternative for people who want to enjoy the WeHo nightlife on New Year's Eve. The city is offering a free shuttle service along Santa Monica Boulevard on Tuesday, December 31 from 9 p.m. to 2 a.m., following the same route as the PickUp trolley which runs on Friday and Saturday nights. 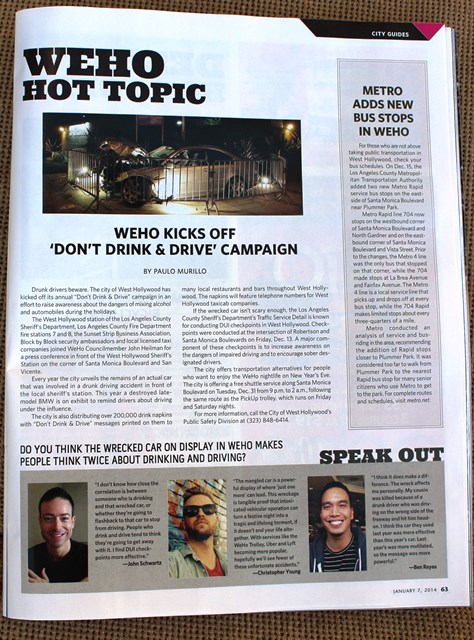 DO YOU THINK THE WRECKED CAR ON DISPLAY IN WEHO MAKES PEOPLE THINK TWICE ABOUT DRINKING AND DRIVING?

"I don't know how close the correlation is between someone is who is drinking and that wrecked car, or whether they're going to flashback to that car to stop from driving. People who drink and drive tend to think they're going to get away with it. I find DUI checkpoints more effective." John Schwartz

"The mangled car is a powerful display of where "˜just one more' can lead. This wreckage is tangible proof that intoxicated vehicular operation can turn a festive night into a tragic and lifelong torment, if it doesn't end your life altogether. With services like the WeHo Trolley, Uber and Lyft becoming more popular, hopefully we'll see fewer of these unfortunate accidents." "“ Christopher Young

"I think it does make a difference. The wreck affects me personally. My cousin was killed because of a drunk driver who was driving on the wrong side of the freeway and hit him head on. I think the car they used last year was more effective than this year's car. Last year's was more mutilated so the message was more powerful" — Ben Reyes