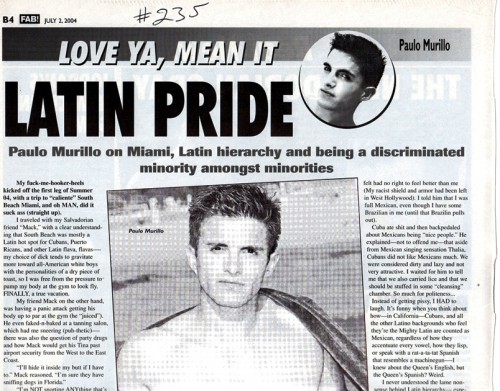 Here’s a blast from the Fab! past.  In light of my recent trip to Miami, I dug up a column  I wrote about my first experience in South Beach.

Needless to say, this last visit was waaayyy different from my first two Florida trips.  I had never done Miami sober.  And I’d never done it with a partner.  It was like going from the halfway house to the penthouse.  I went from crashing on my friend’s dad’s tiny shack somewhere in Little Cuba, to staying at the Biltmore Hotel at Coral Gables.  I went from crawling out of gutters at the crack of dawn, smelling like two-day-old ETERNITY for Men mixed with sex sweat, to smelling the roses while lounging by a giant-sized pool.  I was horrible.  This time was pretty great.  What can I tell you, life has greatly improved. 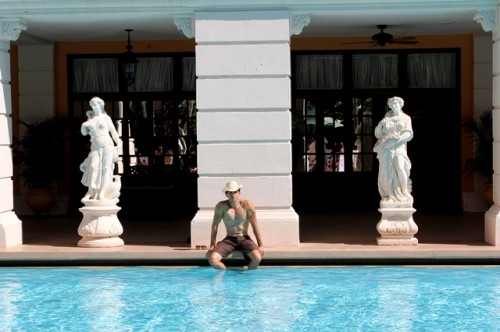 I’m always fascinated when I revisit my previous life.  I staked claim that I let it all hang out in the Luv Ya, Mean It page for FAB! Newspaper, so I was a bit surprised by how much I candy coated that particular trip.  The drug use and all the trouble that came with it was conveniently played down in this column–not to mention all the drama that unfolded from the moment we landed.  My friend “Mack” was all pumped up on steroids, so the bitch was ill-behaved from the word go.  She gave me some major roid rage, but the root of our problem was the crystal meth that we smuggled cross-country.  He jammed his stash in a jar of hand cream; I jammed a forty inside a stick of Chapstick during a time when the TSA didn’t cavity search you before entering a plane.  We waltzed past security while cowering behind some high-end over-sized sunglasses that we couldn’t really afford.

We had party favors.  We were supposed to save the tweak for the weekend, but we got high the moment we got there.  The drugs kicked in and the hunt for relations in Miami began — prematurely in my opinion.  That bitch ditched me on our first night out and I was left to find trouble of my own.  Ugh!  It was just an awful experience.  I remember we were too cheap to split the charge of a ratty Motel 6, but we had no qualms about dropping the same chump change to enter a bathhouse.

The trip was full of incomprehensible demoralization, but I mainly focused my poisoned pen on the Cubans of South Beach on account of those bitches were so mean to me.

The second trip I made to Miami, my life was really spiraling out of control.  I did what made sense and made me feel good.  I bought a plane ticket to see Madonna’s Re-Invention Tour for the fourth time. It was her last show in the states, but that’s a different column for a different day.

Anyway, below is the column published in Fab! Newspaper, dated July 2, 2004.

Racism.  Wrote a column about it.  Wanna read it?  Here it goes.

My fuck-me-hooker-heels kicked off the first leg of Summer 04, with  a trip to “caliente”  South Beach Miami, and oh MAN, did it suck ass  (straight up).

I traveled with my Salvadorian friend “Mack,” with a clear  understanding that South Beach was mostly a Latin hot spot for  Cubans, Puerto Ricans, and other Latin flava, flavas—my choice of
dick tends to gravitate more toward all-American white boys with the  personalities of a dry piece of toast, so I was free from the  pressure to pump my body at the gym to look fly.  FINALLY, a true
vacation.

My friend Mack on the other hand, was having a panic attack getting  his body up to par at the gym (he “juiced”). He even faked-n-baked at  a tanning salon, which had me sneering (puh-thetic)—there was also  the question of party drugs and how Mack would get his Tina past  airport security from the West to the East Coast.

“I’ll hide it inside my butt if I have to.” Mack reasoned. “I’m  sure they have sniffing dogs in Florida.”

“I’m NOT snorting ANYthing that’s coming out of your ass!” I  informed him.

I ran to the nearest public restroom and aimed for a miracle with a  number of push-ups and pull-ups inside a toilet stall (puh-thetic). I  stepped out to the ocean with a beauty pump that was more mental than  physical. I wished I had fake-baked, for my legs were so pasty, that  they camouflaged with the pale sand. I was NOT ready for my close-up!

I witnessed topless women leisurely catching rays with nipples  aimed at the sun, and found it hard to believe that the cities of  Miami and Los Angeles are both in the same country. LA is supposed to
be THE hip-to-the-trip strip, but throw sex in mix and you have LAPD  wasting crime-fighting time on cruise control/penis patrol.  California as a whole is so damn frigid and conservative. Miami is a
24-hour city with hot Havana Nights, where anything goes from the  word “GO!”

I spent hours bouncing to the lazy Miami waves. I talked to all the  locals"”most of them Cuban"”but quickly became keen to the fact that my  multi-personality, which usually makes me popular in most settings,  seemed to be a total bust in Miami. I found the Cubans tough nuts to  crack. Was it my crappy Spanish?

Everyone around me was delicate and polite. The big thing in Miami is a person’s background.  Everyone asked about his or her nationality, but when my roots came  into question, there was always a pregnant pause before the subject  was changed with haste—something was REALLY wrong when I heard my  friend Mack speak in a fake, rapid Spanish tongue and then deny his
Salvadorian heritage to claim that he was from Honduras (puh-thetic).

Night fell over Miami, and I found myself unable to move, due to a  third-degree sunburn! We hit the bars by the beach and once again I  felt disconnected from my Latin peeps. Was I losing my touch?

On the second day at Pleasure Beach, I decided to ditch the  Spanish, while I nursed a hateful hangover. Only then did Cuba, Spain  and the deep, DEEP south show interest in my heritage. I got Italian, Middle Eastern, or flat out white guy because my suntan was more red  than brown and I didn’t use words like, “supposebly.”

One Cubano was straight-up to the head-up: “Oye, so what are you  anyway?” He asked. “Please tell me you’re not Mexican …”  WOOP, there it was! Most Mexicans call themselves mutts and lie  about being half Spanish, half Irish, or have Martian even, as if  claiming half makes them better than a full blown Mexican.

I wasn’t about to deny my roots—not to a Latino whom I felt had  no right to feel better than me (My racist shield and armor had been  left in West Hollywood). I told him that I was full Mexican, even  though I sometimes have some Brazilian in me (until that Brazilian pulls out).

Cuba ate shit and then backpedaled about Mexicans being “nice  people,” he explained"”not to offend me"”but aside from Mexican  singing sensation Thalia, Cubans did not like Mexicans much. We were  considered dirty and lazy and not very attractive. I waited for him  to tell me that we also carried lice and that we should be stuffed in  some “cleansing” chamber. So much for politeness…

Instead of getting pissy, I HAD to laugh. It’s funny when you think  about how"”in California"”Cubans, and all the other Latino backgrounds  who feel they’re the Mighty Latin are counted as Mexican, regardless  of how they accentuate every vowel, how they lisp, or speak with a  rat-a-ta-tat Spanish that resembles a machine gun—I knew about the  Queen’s English, but the Queen’s Spanish? Weird.

I never understood the lame nonsense behind Latin  hierarchy—especially amongst homosexual Latinos who seem to lack  any unity. Face it bitches: When an ass push comes to a dick shove,  all gay Latinos are more or less stuffed in the same boat as far as  hardheaded and aggressively macho Latin cultures go.

Little Gay Cuba gave me a frosty reception because my Spanish gave  me away for a Mexican, but exactly what makes Cuba better? Is it  because Mexicans crawl across the border past “la migra,” while  Cubans swim gracefully past “El Coastguard?” Does it boil down to the  age-old clichÃ© about fair skin making you the fairest of them all? Is  it the same bullshit that makes Japanese better than Chinese and what  makes Americans better than…well, better than the rest of the  world, and so forth (We’ll never know)?

It sucked ass being a discriminated minority among minorities,  but I have to recognize that I’m not free from prejudices of my own:  I was Miss Mexico representin’, all my “paisanos,” until I ran into  four other Mexicans who were not blessed with my height (5'11 to 6ft,  depending on how high my hair is), and lighter skin tone. They  sported Mexi-mullets, they were loud, and kicked sand all over the  place. I was filled with shame and suddenly felt like “The Last of  the Mohicans.”

Needless to say, my Miami trip aimed to humble me and I’m sure there  were lots of lessons that probably went waaay over my head. Maybe I  was supposed to learn to be proud of my Latin Mexican ethnicity, but  not too proud to the point where I trampled other Latin cultures  (beats the shit out of me). I’m all for putting myself out of my  element, but right now my fuck-me-hooker-heels need a vacation from  my vacation.

No diggity, no doubt.