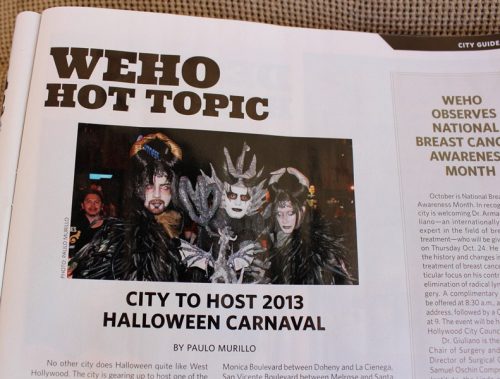 2013 will mark the first year that I will NOT be in WeHo for the annual West Hollywood Halloween Carnaval since I came out of the proverbial closet a good 20-plus year ago (cough-cough).  I will be in Miami Beach this year (they might as well cancel this year’s event).  My partner got me a Miami ticket for my birthday, which was planned back in August.  Imagine my shock when I did the math and realized I would be in the middle of my trip during WeHo’s costume carnaval (the word carnival has been changed to  Carnaval  to deter any preconceived notions that this event offers disgusting hippy carnies on display … at least that’s what I’m telling everybody not to tell nobody)?

I don’t know how they do Halloween in Miami, I’ve never been there for Hallow’s Eve; I don’t know what it looks like, or what it is, but I don’t like it, I decided.  They can’t possibly do Halloween the way we do it in WeHo.  Cuz I mean, let’s face it, no other city does Halloween the way West Hollywood does Halloween.   The city is gearing up to host one of the largest Halloween celebrations in the world with hundreds of thousands of costumed pleasure seekers flocking to the heart of WeHo's Boystown on Halloween night,  Thursday, October 31, from 6 pm  to 11 pm.   The costume party will stretch from Doheny Drive to La Cienega Boulevard along Santa Monica Boulevard.  The city promises to deliver six stages with fifty performers (I called the WeHo Halloween Hotline, and as of the posting of this here Hiss Fit, performers are to be announced.) 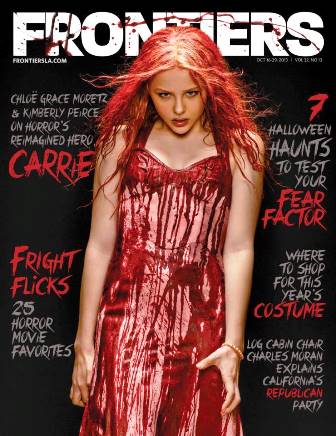 The Halloween issue of FRONTIERS Magazine came out yesterday.  As you can see it features a remade iconic cinematic image of a new Carrie all covered in pig’s blood.  This Halloween issue offers all the how-to, where-to and what-to this October 31st–from how to make it a freaky fright night to remember with numerous Halloween haunts, to where to shop for the coolest costumes, to what to watch on a scream screen leading to Halloween night, and so much more.  Also check out my WeHo Hot Topic page for dates, hours and street closures during the Halloween Carnival. 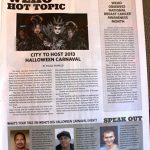 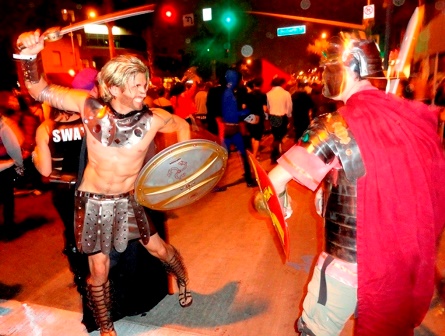