GREG LOUGANIS AND JOHNNY CHAILLOT ARE GETTING MARRIED 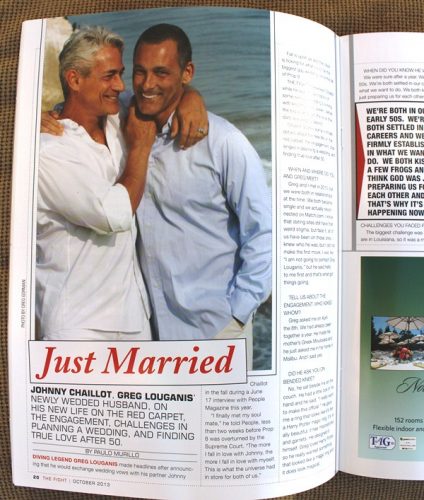 Olympic Gold medalist and star of the diving show Splash, Greg Louganis is marrying his partner Johnny Chialott.  I was invited to attend what is possibly THE biggest gay wedding of the year since the defeat of Prop-8.

No cameras will be allowed at the wedding, which means no texting, no Facebooking, Tweeting or blogging during the ceremony.  I don’t know how we’re all going to do it.  Like I always say, if it didn’t happen on Facebook, it never happened.

I did however, manage to get an exclusive interview with Chaillot for THE FIGHT magazine, while he was in the middle of planning a big gay wedding, aka … a wedding.  These two men are living, breathing proof that where there is love, there is hope for all of us. 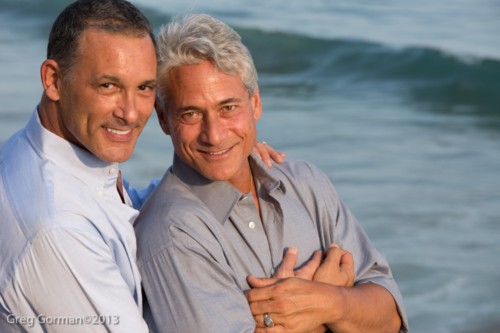 THE FIGHT magazine hit the newsstands yesterday.  Check it out. 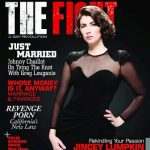 Diving legend Greg Louganis made headlines after announcing that he would exchange wedding vows with his partner Johnny Chaillot in the fall during a June 17 interview with People Magazine this year.

Fall is upon us and the clock is ticking for what could be the biggest gay wedding since the fall of Prop 8.
THE FIGHT interviewed Chaillot while he was in the middle of some serious wedding planning with less than two weeks before the big walk down the aisle (the date was kept a secret).

Chaillot shares some intimate details about his new life on the red carpet, the engagement, challenges in planning a wedding, and finding true love after 50.

WHEN AND WHERE DID YOU AND GREG MEET?

Greg and I met in 2010, but we were both in relationships at the time. We both became single and we actually reconnected on  Match.com.   I know that dating sites still have that weird stigma, but face it, all of us have been on those sites. I knew who he was, but I did not make the first move, I was like "I am not going to contact Greg Louganis," but he said hello to me first and that's what got things going.

TELL US ABOUT THE ENGAGEMENT.   WHO ASKED WHOM?

Greg asked me on April the 8th.   We had already been together a year.   He made his mother's Greek Moussaka and he just asked me in his home in Malibu.   And I said yes.

DID HE ASK YOU ON BENDED KNEE?

No, he sat beside me on the couch.   He had a little box in his hand and he said, "I really want to make this official."   He gave me a ring that looks like"”it's like a Harry Potter magic ring. It's really beautiful; it has moonstones and garnets.   He designed it himself.   Greg loves Harry Potter, so he really wanted something that looked like a magic ring and it does look magical.

WHEN DID YOU KNOW HE WAS THE ONE?

We were sure after a year.   We definitely knew.   We're both in our early 50s.   We're both settled in our careers and we're firmly established in what we want to do.   We both kissed a few frogs and I think God was just preparing us for each other and that's why it's happening now.

GROWING UP, DID YOU HAVE FANTASIES ABOUT A DREAM WEDDING?

Yeah, but I was always the bride [laughs].   No, I never"”when I was growing up, weddings were just a big party, but I never thought that I would really get married.   No.   It never really crossed my mind after I came out.   It wasn't a possibility growing up in Louisiana.

WHAT ARE SOME OF THE BIGGEST CHALLENGES YOU FACED PLANNING A WEDDING?

The biggest challenge was timing.   Most of my family and friends are in Louisiana, so it was a matter of picking the right date. Once we picked it, we stuck with it and everything else fell into place.   I try not to worry too much, but there's food, there's flowers, there's cakes, there's dogs, there's presents for everyone, there's a wedding party, it's picking the restaurant, hotels and drivers and oh my God.

DO YOU THINK BEING LEGALLY MARRIED IS GOING TO CHANGE YOUR RELATIONSHIP IN ANY WAY?

I have no idea.

WHAT'S IT LIKE WALKING A RED CARPET AS GREG'S ARM CANDY?

It's fun. I know where it lies in importance, but it is certainly fun. Those red carpet moments are Greg working.   That's his job and that's the one thing that was told early on to me, that the travel and the event that we go to, Greg is working and he works really hard.

WHERE WILL YOU BE SPENDING YOUR HONEYMOON?

We want to go to Africa, but we don't know when we'll be able to go.   We'll find time to do that.

It's comfortable.   The travel and all the media stuff is fun but my favorite times with Greg are just being at home eating a bowl of rice and watching a Harry Potter movie.   It's the quiet times that are really precious to me and we manage to to fit them in.   There is good chance that all of us will get to experience this "¦ I think marrying the person that you love"”it doesn't matter where, when or how. I get to marry Greg and that's all that matters.   He just happens to be who he is.

We're both in our early 50s.   We're both settled in our careers and we're firmly established in what we want to do.   We both kissed a few frogs and I think God was just preparing us for each other and that's why it's happening now.