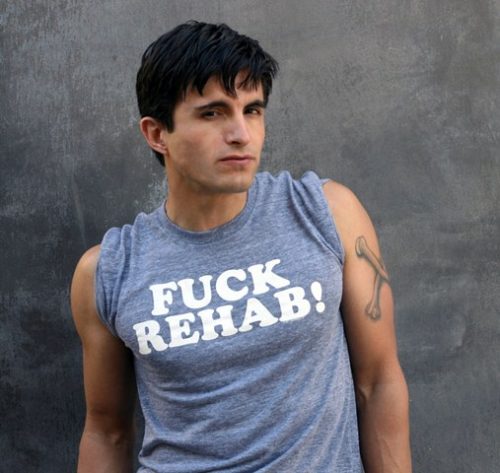 The quote you see below is still floating all over the internet to this day.  This gem comes from the Windy City Times website; I believe the year is 2003.  I was shit-kicked into rehab only 10 days into 2007, so you can only imaging the level of insanity that was my life during that time.

Some of the shit I wrote in the column “Luv Ya, Mean It” for FAB! Newspaper was quoted a lot back in the day.  Gay reporter Rex Wockner had a syndicated column called “Quote on Quote,” which compiled soundbites from gay media outlets the world over and these quotes were published in gay publications all over the country.  It was a trip seeing my name being quoted next to Rosie O’Donnell, Ellen Degeneres and so forth.

It was also a real trip when respectable publications would get hate mail because they DARED to quote me.

I reckon, one should be careful what one writes; it does come back to haunt you in the not so faraway future.  The more intolerant one is, the more one is forced to eat shit — not that I’m haunted by these words, mind you–I actually find the AA quote kind of funny, but mostly because it speaks what was then my harsh truth.  I don’t know too many people who first walk into the rooms of recovery thinking that it’s going to be something that resembles anything remotely fun or cool.

I straight up didn’t give a fuck!

That is until I found myself completely fucked.  A change of heart was really a matter of choosing between life and death.  I could have stuck to my guns and ended up dead with a bullet to the brain via a bump of crystal meth, but I was never EVER out to off myself.  I liked me too much.  Ask anybody.

Of course my lil’ quote pissed some sobers off.  You best believe I had a new hole ripped into me via the letter’s section of FAB!.  People may be pissed off to this day, I honestly never know who read what back in those crazy years, but I honestly believe for the most part that people in the program with a sense of humor read the quote for what it was, which was–to add another quote: “methinks the lady doth protest too much.”

That quote came up–especially in early recovery when people from the program would hit me up at a meeting talkin’ about, “Hey, I remember you!  You’re that guy who wrote that column about … ”

I hear my name was also brought up during fellowship in that first year of recovery.  “That one is a mess,” they said behind my back.  “That one needs to make a lot of amends.”

Needless to say I had some problems.  I’m talkin’ about some SERIOUS problems.  But we all know the clichÃ©, every crazy moment led to who am today, and today, I think I’m alright, so fuck it.

They say, more will be revealed.

And boy was it ever.