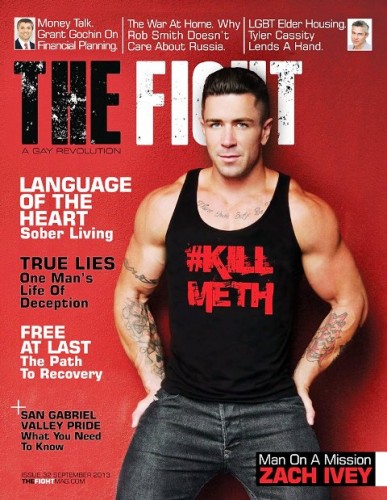 That was my first impression of him when I walked into a fancy suite at hotel in Hollywood to meet this guy that I would be interviewing for the cover story.   You best BELIEVE I let out a sigh of relief to learn that the man has a sense of humor.

For those of you not in the know, September is Recovery Month.  In the spirit of all things recovery related, The Fight Magazine has dedicated their September issue to stories about individuals overcoming several forms of addiction. 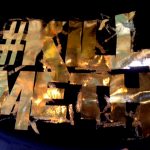 It was nice meeting a man who’s on a mission to kill meth.   Though this man has a light sense of himself, his story is no joke as the article below reveals.

Oh yeah, and for the record, I only saw him shirtless.   Not “porny” at all. 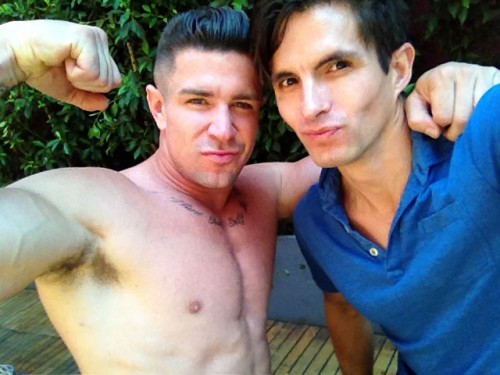 Anyway, read the article below and pick up an issue of THE FIGHT that’s out like right … NOW!!! 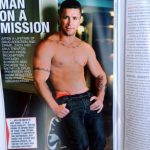 MAN ON A MISSION

After a lifetime of  drug addiction  and crime, Zach Ivey (aka Trenton Ducati) finds redemption through sobriety and creates "Kill Meth" – a drug prevention and harm reduction non-profit organization.

===
Zach Ivey, known to most as gay adult film entertainer Trenton Ducati, is on a mission to send an empowering message of hope to anyone who feels powerless against drugs and alcohol – particularly meth – which continues to ravage the gay community.
Though Ivey is hardly the first man in the adult industry to speak out against the dangers of addiction, he has put his time and money where his mouth is, offering help and providing hope with his "Kill Meth" campaign – a drug prevention and harm reduction non-profit organization that seeks to engage people in dialogues about killing meth addiction via social media.

Coming up on six years of continuous sobriety and meth freedom  on January 12, 2014, Ivey claims that while he owes his entire life to that clean and sober anniversary, he doesn’t count days.   “I enjoy the moment because I’m sober – that’s what counts,” says Ivey in an interview with THE FIGHT.   “I think day counting is very discouraging and it can be overwhelming. My thing is just aim for a better life, even if that happens in one day or 60 days.”
While definitely enjoying his Trenton Ducati moment (he has landed gigs with some top production companies including Falcon, Lucas Entertainment, Hot House and Titan) "“ life, reveals Ivey, hasn’t always been glamorous photo shoots, naked sessions with gorgeous men and public appearances the world over.   He has been up against it and he has gone through it, from his early history as a cowboy riding bulls in the rodeo circuit, to sex, drugs, a life of crime, some prison time, and his redemption through sobriety, which has lead to fame in the adult industry.

Alcohol and cocaine were the norm for Ivey, who ran with an older party crowd at a very early age in New Mexico.   However, all that changed when he tried meth for the first time at age 13.   “That drug completed me,” he said.   “It removed any kind of awkwardness or social anxiety I had.   It replaced my family and anything I felt I was missing in my life.   I was deeply in love with this drug.   I remember saying, ‘I’m going to do this drug for the rest of my life.'”

Ivey found meth in the form of speed, which wasn’t considered a bad thing at the time because of Dexatrim and other diet pills. He convinced his doctor to prescribe him some Ritalin for ADHD.   He eventually went through the entire prescription in two to three days.   “I progressed into shooting it and made myself sick until I couldn’t breathe,” he reveals.
After moving to Seattle where he was able to sober up for a while – the drugs eventually caught up to him after getting romantically involved with a drug dealer.  “I stayed away from it at first,” he says, “but after a year and a couple of months, I started dabbling it in again, because, of course, I had a prescription from a doctor.”

Initially, says Ivey, he was able to live a fairly normal life. “Life was good.   I was running a construction crew. I was getting introduced to the gay scene and going to bathhouses.   I met all these hot guys and didn’t really understand what was going on – not one person discouraged me from getting high, not one person ever mentioned addiction.   At that point, everything crumbled. My life fell apart.”

“Seeing all the consequences in the world isn’t going to stop a drug addict from doing drugs,” says Ivey.   “I lost my sense of self. I remember sleeping on people’s floors.   I remember at one point looking at a mirror inside a port-a-potty and I saw my eyes and I was like, ‘I don’t think this is what my mom planned for me.'”

Turning to a life of crime – Ivey landed in jail more times than he cares to mention.  It became a good place to eat and sleep, he reveals.   “Life was not working for me,” He said. “I ended up going to prison at one point.   That was probably the best thing that ever happened to me because it gave me an extended time out.   They knew that I was gay, so they locked me up in the hole for four to five months.   I was quarantined.   I felt belittled and so sick and defeated.   I had been on the run for years.”
While in prison Ivey befriended a sober man, who was in the cell next to his. The man inspired him to write a letter to the state of Washington asking to be sent to rehab. He wrote a letter with a pencil the size of his finger.   Ivey believed he would die if they let him out of jail.   He was an obvious candidate for rehab services – however, Ivey’s criminal past continued to stack up against him.   The FBI stopped his bus on his way to rehab and slapped him with a new criminal charge.   He was in a ton of trouble, but the judge in the federal court did not kick him off his path to recovery. “I went to rehab for a year of pre-trial sobriety,” he said. “I felt safe in the hands of the federal government. There was nothing I could do and it felt so good, because my best thinking got me absolutely nowhere"¦   Three years passed from when I wrote that letter.   I was helping others, running AA meetings, personal training people.   It was actually the best time of my life.   I was more free in prison than I was on the outside – ever.”

At five and half years clean and sober, Ivey says that he feels truly happy and free.   “A person can create their own prison that’s worse than any prison that I’ve ever been to,” he said. “Life is beautiful today.   I’m not restricted by the bondage of any kind addiction.   I’m so thankful every day.   Family is the most important thing in my life, like my niece and being a son for my mom. I also have a universal power that helps me through it.   I am very confident in that power.   I feel like I can do anything.”
Ivey started the #KillMeth campaign via twitter, offering help and hope to anyone having issues with methamphetamine. The first tweet went up on February 25.   He has spread that message through t-shirts and other apparel, available at soldoutclothing.com.

“I am not spreading, promoting or pushing the message of AA,” he clarifies. “My approach is that there are a million rivers in the mountain that all lead to the same ocean.   I’m offering harm reduction ideas.   Complete abstinence from drugs works for me, but that’s just me.”
Ivey emphasizes that he wants to especially focus on men in the gay community who he feels are predisposed to drug addiction. “Meth is a sexual drug,” he said. “I think that gay men can be insecure about their sexual activity.   Meth can be kind of a buffer for a sexual situation, but to clear the record, sex on meth is not good.   It is a false reality.   You’re going to spend most of your time trying to make it happen in the bathhouse, but there are either not enough drugs, or you’re too high and nothing happens.”

Ivey is in the process of turning Kill Meth into a non-profit 501c3. His mother – Tracie Zeissel – will head the foundation.   Like most non-profit organizations, Kill Meth is in need of support, through community funding to get started.

Ivey is also looking for people to join the campaign by taking pictures of themselves wearing the #KillMeth t-shirts and spreading the word.

“If one person were to find some sort of hope or help just from reading a tweet on #KillMeth-that to me means more than anything in the world.”

***You can follow the Kill Meth campaign on Tweeter #killmeth, or visit killmeth.com (currently under construction). For more on Trenton Ducati visit trentonducati.com.***

""¦ Sex on meth is not good.   It is a false reality.   You’re going to spend most of your time trying to make it happen in the bathhouse, but there are either not enough drugs, or you’re too high and nothing happens."