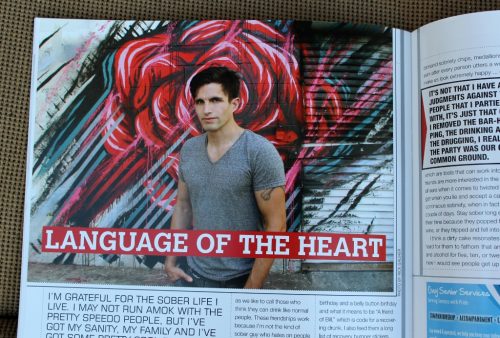 I keep forgetting to post this little ditty I wrote for THE FIGHT Magazine in their September issue that was dedicated to Recovery Month.   It was originally supposed to be called “Dirty Cake,” but the tittle was changed to “Language of the Heart,” because the subject matter is more about recovery lingo with a little dirty cake thrown in the mix.   Truth is, I ranked out at the last minute because dirty cakes are no joke in the realm of recovery.   Some people celebrate milestones of continuous sobriety only to find out that the sobriety wasn’t so continuous.   The slightest hint that your shit is dirty and word spreads like wildfire–and by word, I mean judgment.

One must proceed with caution when writing of such matters.   I could see it now: I write about the meaning of a dirty cake and that gets translated into “Paulo Murillo Has a Dirty Bundt Cake.”

Anyway, every month is Recovery Month in my household (grin), but check out the latest issue of The Fight, while it is still out. 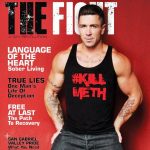 LANGUAGE OF THE HEART

I’m grateful for the sober life I live. I may not run amok with the pretty Speedo people, but I’ve got my sanity, my family and I’ve got some pretty cool friends; sober and not-so-sober.

There was no question that heads were going to roll in the friendship department when I cashed in the cool chips in return for some continuous sobriety over a good six years ago.
It’s not that I have any judgments against the people that I partied with, it’s just that once I removed the bar-hopping, the drinking and the drugging, I realized the party was our only common ground.   Everyone was my friend when the club was jumping, but I rarely saw my party friends in the daylight, unless of course we were at a tea dance battling it out in our pretty Speedos and sporting a nasty cock-blocking disposition.
Needless to say, I got sober and sort of drifted away from those party friendships that are known in recovery as “lower companions,” – a term I detest, because it smacks of prudence.   I have nothing against those past party friends who once held my bangs back while I barfed at Motherload, but alas, I had to get my own house in order without any heated debates, speeches, or dramatic exits.
However, not all my friendships were superficial during my drinking days-in fact, I have a lot of close friends today who are not sober, or “normies” as we like to call those who think they can drink like normal people. These friendships work because I’m not the kind of sober guy who hates on people for getting their drink on, and my non-sober friends recognize that I’m still me – maybe a little calmer but still shirtless and a little twisted despite my lack of a drink.   Seeing them get wasted reminds me that I’m not missing much, and they hearing me talk recovery makes them swear I’m the closest they’ll ever get to a 12-step program

WRECKAGE OF MY PAST

We sobers speak a language that normal people do not understand—aka, the language of the heart.   You best believe my non-sober friends are up to speed on the recovery lingo.   Thanks to me, they understand the difference between a sober birthday and a belly button birthday and what it means to be “A friend of Bill,” which is code for a recovering drunk. I also feed them a long list of recovery bumper stickers, such “Let Go, Let God,” “More Will Be Revealed,” “Easy Does It,” “Expect Miracles,” and “Keep it Simple Stupid,” to list some of my faves.   Words like “I have a resentment,” “I need to make an amends,” and “that’s the wreckage of my past,” are part of our vernacular whether they like it or not.

By now my “normie” friends (using the word “normie” very loosely, mind you) know how we do recovery in the West coast a little differently from the East coast.   For example, in the East they insist on saying sober anniversary instead of sober birthday when you accrue years of continuous sobriety-which means you don’t get birthday cake and people rarely clap in the East.   However, in the West, we demand sobriety chips, medallions, cake and we clap with enthusiasm after every person utters a word in a group level, which can either make us look extremely happy … or we look like a bunch of half-wits (depending on my mood).

THE TRUTH ABOUT DIRTY CAKES

Speaking of continuous sobriety and birthday cake … I have learned a lot of tools in recovery that I try to pass on to my friends, which are tools that can work into the program called life – however, my friends are more interested in the darker side of the sober moon; they’re all ears when it comes to twisted shit like dirty cakes, which is what you get when you lie and accept a cake to celebrate a number of years of continuous sobriety, when in fact you only have a couple of months or a couple of days.   Stay sober long enough you’ll see some people re-set their time because they popped that extra pain pill, drank a glass of wine, or they tripped and fell into a baggie of cocaine or crystal meth.

I think a dirty cake resonates with my friends the most because it’s hard for them to fathom that anyone could be abstinent from drugs and alcohol for five, ten, or twenty years-continuously.   When I was new I would see people get up and blow out ten-plus candles for ten-plus years, and I’d be like, “That bitch is lying.”   And some do lie, but those who lie about being sober, can’t stick to their lie for too long.   I reckon it’s tough admitting that you slipped, but having people you love and respect present you with a dirty shit cake can’t feel too good.   To thine own self be true.

Then there’s 13-stepping; in some regions the 13th step is when a person dies clean and sober, which is actually pretty cool, but most people I know attach the 13th Step to sexual predators who molest newcomers (or someone newly sober), because newcomers don’t know any better.   I guess some are sicker than others.

ADDICTED TO THE ATTENTION

Recovery is not easy, but stick to it and you see miracles happen when people count sober days into sober years.   I have also seen people struggle to stay on the path because addiction is a mean mutherfucker.   “Keep coming back,” the bumper sticker reads, but keep coming back doesn’t mean keep going out.   It’s like some people become addicted to the attention and the applause when they stand up as someone new.   I’m like, “Really bitch?” I’ll try to stay out of judgement but it seriously stops being a relapse when you keep getting high week after week.

I reckon no one can rob a person of their journey; live and let live.   I’m grateful for the sober life I live. I may not run amok with the pretty Speedo people, but I’ve got my sanity, my family and I’ve got some pretty cool friends; sober and not-so-sober.

It’s not that I have any judgments against the people that I partied with, it’s just that once I removed the bar-hopping, the drinking and the drugging, I realized the party was our only common ground.