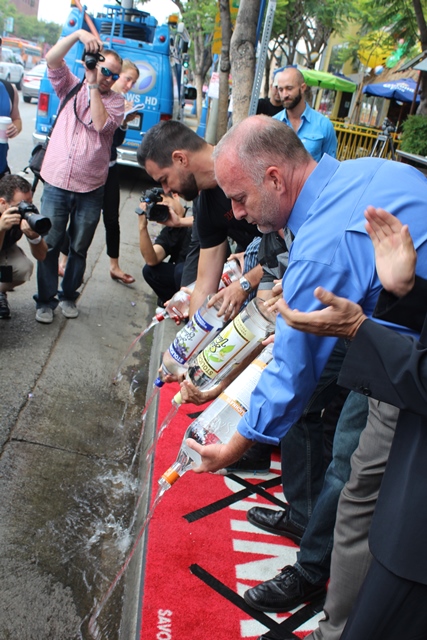 It’s all about getting the message across.  At least that’s the message that I heard when I attended the Dump Stoli demo in front of Micky’s last Thursday, August 1st.  Council member John Duran and WeHo bar owners from Micky’s, Revolver, and Eleven stood before Telemundo, CNN, ABC 7 and other local news outlets to hold a Stolichnaya Vodka dumping ceremony.  It was a throwback to the late 70s when gay bars boycotted Coors Beer for their anti-gay practices and their support of anti-gay causes.  The evening news showed footage of gay bartenders dumping Coors Beer in San Fran and across the nation.  Then cut to today, and we witnessed gay bar owners dumping Stoli Vodka into the gutters of the gay ghettos in response to the recent anti-gay laws that were passed in Russia. 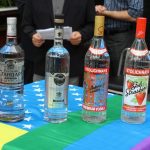 It’s very possible that getting the message across comes at the expense of a Vodka company that may be not so innocent, but also not as guilty as gay leaders would like us to believe.  Unlike the Coors beer boycott, where we hit the anti gay source where it hurt, eye-for-an-eye, tooth-for-a-tooth, I’m not so sure flinging a Stoli bottle at Russia sends out a similar message.  The more we learn about Stoli, the more our dump Stoli boycott is starting to look like a limp-wristed flinging of a um … water bottle, because although Stoli is made from Russian ingredients, what we witnessed at the demonstration was the dumping of mock-vodka (modcka), meaning  those Stoli bottles were filled with water, not vodka … for environmental reasons.  What can you do?

Reading about whether or not Stoli is Russian or Latvian, or whether Stoli has always been pro-gay, or simply pro about branding its name on gay parades, this cluster fuckery has become very similar to the Zimmerman case, in that information gets so convoluted, you pretty much can decide to take whatever stance you want to take in support, or condemnation of, and you’ll find the “news” report to support your stance.

I wonder if the Stoli dumpers would ever admit they were wrong, if it turns out they are wrong about Stoli?

I also can’t help but wonder what the LGBTQ in Russia think about us when they read that we’re dumping water in Stoli bottles to send out a message.  It really boils down to bringing awareness to the injustice and abuse gay people are suffering in Russia, isn’t it?  It doesn’t matter how you get the message out there, as long as the message is heard, and if that message gets the name of your bar in the evening news, well … (pregnant pause).  Then again, fuck me up the ass for saying so, but wouldn’t burning an image of Putin or torching a Russian flag, or at least ripping a photo of Putin standing in front of a Russian flag be more directly to the point?  Wouldn’t the message be clear—you’re an asshole.  We don’t like you.  We don’t like what you do.  The message would be loud and in your face, wouldn’t it?