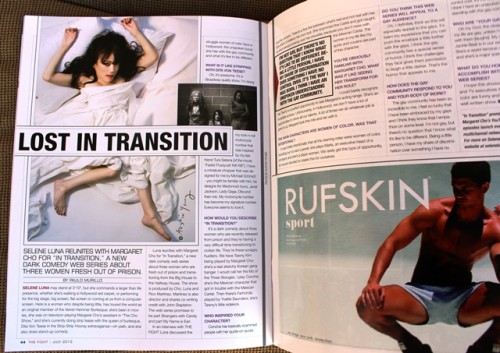 It sucks hanging out with Selene Luna–mostly on account of nobody looks at you when she’s in the room; you stand next to her and then you watch yourself fade into the wallpaper and then feel yourself vanish into thin air.  At least that was my experienced when I met the burlesque darling a good four years ago through two good friends of mine.  We went to have some Pho in Korea town (we call Pho chinless soup on account of it has so much sodium and it makes your neck so bloated that you lose your chin and walk around looking like a thumbprint).  The restaurant was full of people.  All eyes were instantly on her, which was kind of trippy, because most Asian cultures tend to be reserved with eyes looking forward at all times.  It’s not polite to stare, but those prying eyes didn’t faze her one bit. 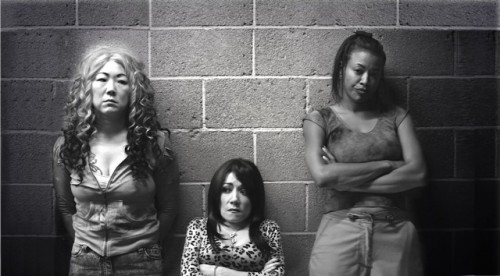 I jumped on the opportunity to interview Selene (we’re on a first name basis) for the most current issue of THE FIGHT magazine where she talks about reuniting with Margaret Cho for their new web series In Transition.  Read the interview below, or you can pick up a copy of The Fight, which is on the street now. 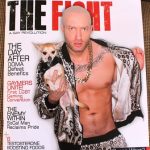 LOST IN TRANSITION
BY PAULO MURILLO / PHOTO BY AUSTIN YOUNG
Selene Luna may stand at 3'10", but she commands a larger than life presence, whether she's walking a Hollywood red carpet, or performing for the big stage, big screen, flat screen or coming at ya from a computer screen.   Here is a woman who despite being little, has toured the world as an original member of the Velvet Hammer Burlesque; she's been in movies, she was on TV playing  Margaret Cho's assistant in "The Cho Show," and she's currently doing strip tease with the queen of burlesque,  Dita Von Teese  in the Strip-Strip Hooray extravaganza"”oh yeah, and she also does stand-up comedy.
Selene reunites with Margaret Cho for "In Transition," a new dark comedy web series about three women who are fresh out of prison and transitioning from the Big House to the Halfway House.  The show is produced by Cho, Luna and Rico Martinez.   Martinez is also director and shares co-writing credit with John Stapleton. The web series promises to be part  Strangers with Candy  and part  My Name is Earl.
Selene sat with THE FIGHT to discuss the struggle women of color face in Hollywood, the unspoken bond she has with the gay community and how much she loves dark gay humor.
What are you eating?
I call it a Mediterranean burrito.   You get all the ingredients you would put in a pita and you put it in a tortilla. I eat them a lot. It's how I roll.
So what are you up to these days?
I'm trying to balance my life between standup comedy and stripping.   The Strip Strip Hooray Summer Tour with Dita Von Teese kicked off in Los Angeles in June.   We have more dates coming in the fall.  It's a lot of fun.
What's it like stripping with the likes of Dita Von Teese?
Oh, it's awesome.   It's a Broadway quality show. I'm doing my rock-n-roll motorcycle number that was inspired by my late friend Tura Satana [of the movie "Faster Pussycat! Kill! Kill!"].   I have a miniature chopper that was designed for me by Michael Schmidt"”you might be familiar with him, he designs for Madonna's tours, Janet Jackson, Lady Gaga, Dita and then me.  My motorcycle number has become my signature number.   Everyone seems to love it.
Tell us about "In Transition."
It's a dark comedy about three women who are recently released from prison and they're having a very difficult time transitioning to civilian life.   They're these scrappy hustlers.   We have Tawny Kim being played by Margaret Cho; she's a real sketchy Korean gang banger.  I would call her the Mo of the Three Stooges.   I play Concha; she's the Mexican character that got in trouble with the Mexican Cartel.   Then there's Farhonda played by Yvette Saunders; she's Tawny's little sidekick.
Who inspired your character?
Concha has basically scammed people with her quote-on-quote, psychic powers.   There's a fine line between what's real and not real with her. She starts to believe her own bull.   She scammed the Cartel and got caught, so she's always looking over her shoulder, because you don't mess with the Mexican Cartel.   The women in my life like my aunts and cousins are part of this character.
You're obviously familiar with Margaret Cho.   What was it like seeing her transform for her role?
I could barely recognize her.   Tawny is a perfect opportunity to see Margaret's acting range.   She's an incredible actress.   Unfortunately, in Hollywood, we don't have a lot of opportunities to show all our talents.   A lot of times we do whatever job is given to us.   Margaret took this role and ran with it.
The main characters are women of color.   Was that intentional?
It was totally intentional that all the starring roles were women of color, including our co-star Luenell; she plays Marla, an executive head of a company and she's a black woman.   We rarely get this type of opportunity, so we just decided to create this for ourselves.
Do you think this web series will appeal to the gays?
Oh, I definitely think so"”this will especially appeal to the gays.   It's been my experience that you can push the envelope a little further with the gays.   I think the gay community has a special sense of humor.   I think the challenges they face gives them permission to laugh a little darker.   That's the humor that appeals to me.
How does the gay community respond to you and your body of work?
The gay community has been so incredible to me. I feel so lucky that I have been embraced by my gays and I think they know that I empathize on some level. I'm not gay, but there's no question that I know what it's like to be different.   Being a little person,  I have my share of discrimination over something I have no control over.   It's the way I was born.   I think I have an unspoken understanding with the gay community.
Who are your gays?
Oh my God, the closest people in my life are gay, unless I'm sleeping with them [laughs].   My good friend Jackie Beat is in our web series. She's a world famous drag queen and she's a major scene stealer.
What do you hope to accomplish with this web series?
I hope this shows the audiences and TV executives that women of color are funny and we can carry a well written show.
"In Transition" premiers July 3 on Margaret Cho's YouTube channel.    New episodes launch every Wednesday by multichannel network Maker Studios. For more on Selene Luna visit her website at seleneluna.com.
Click on Margaret Cho’s Youtube channel to watch all three episodes.
http://www.youtube.com/watch?v=hXusCSpAZVc
SNAP THAT!!! GAY GEEK GAYMERS CONNECT FOR GAYMERX