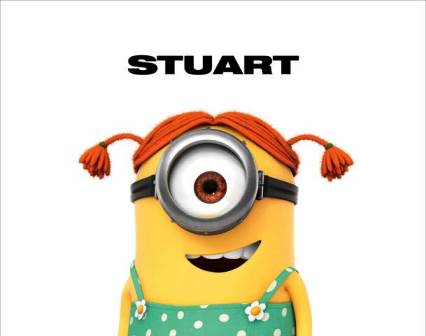 The Minions from the new Despicable Me 2 movie look so damn cute and cuddly … and kind of queeny.  I seriously could not help but notice that some of these minions are giving you some drag queen/cross dressing action.  I haven’t seen the movie (yet), but judging from the movie posters indiscriminately plastered all over the city, you clearly have boy Minions with boy names that are dolled up like little girls.

There’s one-eyed ginger minion Stuart with Pipi Longstocking braids and a flowery summer dress.  I don’t know WHAT the deal is with Stuart, unless it’s a girl with a boy name, but something tells me this is a boy in a dress.  And judging from the side-glance of the Minion in the Farmer John overalls to the left, the other Minions know it and they find it strange … and a bit … alarming.

Then you have Phil–not to be confused with Phil the Syphilis Sore, people.  Phil is dressed like a cute little French Maid, with feather duster in hand.  Again, I have not seen the movie (yet), so not sure what his deal is, but I think Phil is simply a door bell. 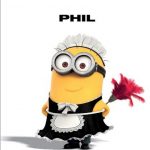 THEN you have another boy minion dress up as a Hawaiian Hula girl with coconut top and grass skirt standing next to a boy minion that has the same “this dude is wierd” look on his face.

Do any of you remember the religious right freaking out and starting a shit storm when they decided that Tinky Winky was bad for children because Tinky was gay?  Let’s see, he was purple, he had a triangle over his head and he (gasp) carried a purse.  Yet these minions are clearly gay in the girlie way, but they seem to be getting more of a buzz via the Internet than a hail of shit from religious freaks, which is kinda cool, don’t get me wrong; I  actually enjoyed the first Despicable Me, even though these cute lil’ minions are some of the  laziest computer animation I’d ever seen (it looks like somebody drew eyeballs and a clump of hair on big fat thumbprint). 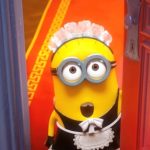 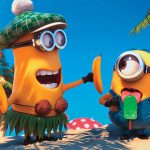 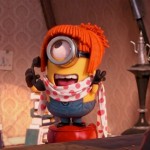 Either times really are a changin’, or we gays are completely losing our edge.

ANOTHER MYSTERY MEMORIAL GOES UP IN WEST HOLLYWOOD ALCOHOLIC / ADDICT