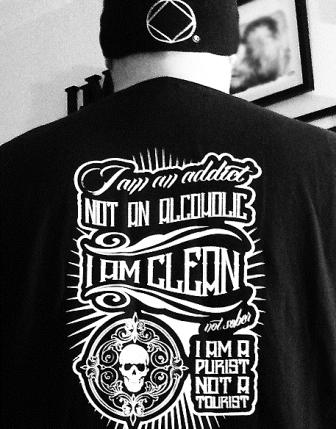 Saying you’re an addict and NOT an alcoholic and then adding that you’re clean but not sober is kinda like spraying cologne on a dirty asshole and telling yourself you don’t need a shower (I hate cologne queens).  The same goes for people who say they’re sober and then light a joint or pop them pills like it’s a game of Hungry Hungry Hippos (the one with the most Xanax tabs in his tummy, WINS).

I totally get that some people identify as strictly alcoholic because they never did drugs, but I don’t know too many alcoholics who think they can use drugs and still claim they’re sober.  The same doesn’t seem to apply for people who identify as addicts–first off, I don’t know too many addicts out there who didn’t drink with their using.  I’m sure they’re out there, I’ve just never met one personally.  However, I know a lot of addicts who think they can drink and still claim they’re clean.  Everyone has their own journey and is entitled to their own experience, I just find it interesting the way these things work … or don’t seem to work for that matter.

I used to strictly identify as an addict back when I was a newbe.  I defiantly left the word alcoholic out of the equation, because to me alcohol was kid’s stuff.  Yeah, I drank a lot, cuz that’s what the cool kidz did, but drinking was not my problem.  Shit hit the weed whacker and I was like, oh no, don’t get it twisted bitches, I’m here because meth kicked my ass.  Meth is a hard drug, it is illegal, highly addictive and it gives you an out-of-body experience that forces you to do things … very bad things.  Alcohol was for wimps.  I hated getting drunk because the drunker I got, the more shit I had to snort to get high after that last call for alcohol.  I had some problems–drinking was not one of them, yet today I identify as an alcoholic or an addict, because the I definitely possess the ism in alcoholism and the ick in addict.  The drink was the root that led to the drug and if I decide to drink, I’m not so sure that I won’t get high, so no drinking for yours truly.

I can’t imagine getting piss drunk out of my mind, waking up with a hangover the next morning and then telling the guy in the mirror that it’s all good because it’s all about clean livin’–boozing is not using.  I wish I could separate drinking from using, but alas … drinking feels like using to me, so my ticket is pretty much punched–meaning I’m pretty much fucked.  I’ve seen people try to drink and not drug and carry on and … um … “keep calm” (I hate those stupid Keep Calm slogans), until the day when drinking inevitably leads to drugging and then it’s back to day one.  Or drinking takes the place of drugging and words like “happy hour,” “I need a drink,” “getting my drink on,” become part of the vernacular.  Cute.  All the cool kidz are doin’ it.

The guy pictured above left a bitchy comment on a recovery website about how he’s clean but not sober and people need to quit using the word sober when referring to addicts and so forth and so on.  The guy’s FB page smacks of someone newly recovered.  He has a picture of NA literature fanned out as his cover photo and he throws the NA Unity Symbol around like it’s a gang sign.

I reckon we all wanna be special and different and belong to our own unique sect with our own special set of rules, but it doesn’t matter how you slice that shit; if you spray cologne on a dirty asshole, a clean asshole cologne does not make.  You inevitably walk around smelling like a hamburger.  The steaming kind.

I guess keep coming back.  It only works if you werk it.