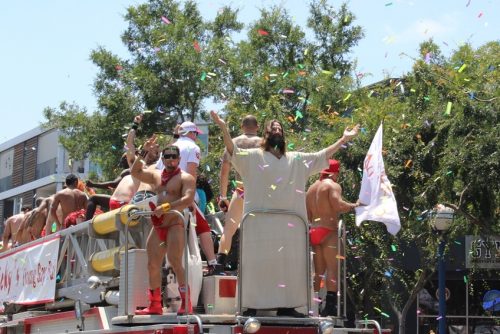 It’s the morning after West Hollywood’s One City One Pride festival and my ass is BEAT!!!  I have much to share, so let’s get down to business.

It’s happened folks.  For the first time in my life I sat through the entire Gay Parade.  I used to make fun of people who did that kind of shit.  I was always too busy working the sidewalk up and down the boulevard strutting my stuff and junk to pay much mind to a bunch of dumb floats.  I remember my sassy ass writing something nasty about how I wasn’t ready to let the gut loose and park my tired ass on a curb to watch a gay parade.  I don’t remember it word-for-word, but I wrote something about gay parades being fit for lesbians, flatliners, and loser—oh yeah, and old folks.  Then cut to the present West Hollywood CSW Pride parade 2013, and I vowed to sit through the entire shindig, trying my damndest (not a real word, I know) not to eat crow, while I stood in front of the Big Gay Starbucks making a tight gut. I forced myself to stand and STAND, until I felt I couldn’t stand it anymore.

The parade is what it is.  At this point in the game, parade officials must know that they can’t win.  I don’t think it will be ever come close to perfection, or that anyone will ever walk away from it not bitching about it being too long, or too short, or moving too slow with too many gaps between floats, or there not being enough floats and too many commercials and it’s not luxurious enough and the hiss fit can be endless.  Like everything in life, the parade had its good moments and some parts were disjointed to say the least. 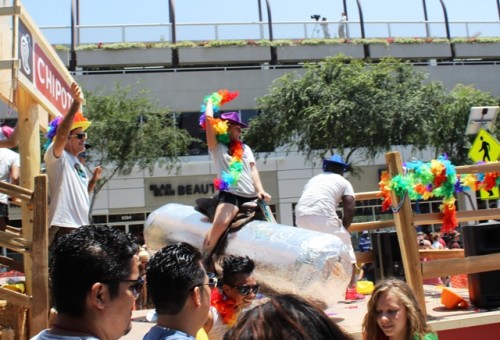 The day started out gloomy, but the June gloom burned off and it turned into a perfect day for a gay parade. Some parade highlights in my opinion are:  Civil rights activist Gloria Allred with drag queen friend–both decked in white wedding gowns to show support of gay marriage.  I like that real military men have become a staple at gay parades.  And a lot of business showed their support to the community, or at least they showed that they appreciate the value of buying an ad to march at a gay parade.  Progress, people!  Progress.

Let’s see, the local bars did their thing.  The Abbey delivered sexy guys humping on the hoods of cars in all their pornographic glory with obvious spray-on abs that made me wanna play some tic-tac-toe.  Micky’s dance club gave us a giant firetruck with sexy guys in string bikinis AND none other than Jesus standing at the tail end of the truck, which made people happy, but I mostly loved the random sacrilegious spectacle of it all, even though I’m sure the man who plays Jesus has the best, most loving intentions.  Not to be left behind, Revolver video bar had two sexy guys perched on a giant wedding cake, which was real perdy; how these guys managed to stand on that tiny space without falling off, beats the shit out of me.

Moving along, I loved watching a woman ride a giant Chipotle Burrito that buckled like she was riding a mechanical bull … or a giant vibrator–let’s be for real here.  Chuy of Chalsea Lately was there to represent.  Dragorilla stuck to tradition while riding his/her bike down the parade lane in pink thong and pink bikini top.  And although I don’t really know much about this year’s Grand Marshal Maria Menounos, she looked really cute in her rainbow colored two-piece summer dress.  And of course there are the people who watch the parade; they can be entertaining to watch while you wait around for the next float to slowly pass buy. 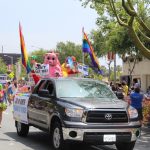 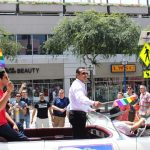 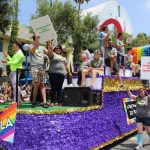 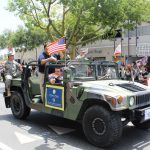 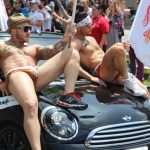 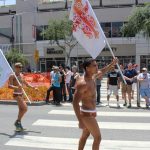 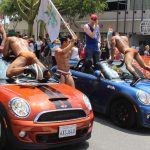 And speaking of floats passing slowly.  I’ve never really stood around for an entire gay parade, so I’m not sure how it’s supposed to work, but things were on a slow roll.  At one point the gap was so huge people thought the parade had ended.  I started to leave, but then I noticed a tiny colorful float in the very far off distance.  Who knows, maybe The Frat House float broke down at La Cienega Blvd, but that fucker was slow.  It made me mad.

What else didn’t I like?  Did I mention the Abbey boys had spray painted abs?  Oh yeah, with the thousand upon thousands of gay men–a lot of ’em power gays, and most of ’em connected to Hollywood in one way/shape/form, it’s really hard to BELIEVE that the best The Powers That Be could come up with for a Grand Marshal was an entertainment anchor that not many people have heard about–especially from network television (her perky cuteness aside).  I’m sure this has been bitched about up and down Santa Monica Blvd already, so I will move things along.

Then of course, there’s the inevitable bitching about the gay for pay commercials.  The most touching element of the CSW Pride parade–for me personally–is seeing parents show up and march in support their gay son/daughter, or sons and daughters showing up to support their gay mother/father.  Now you see a the sign that reads, “I Love My Gay Mom” and mother and daughter are both wearing a red Bank of America T-shirt.  Sign of the times, People.  Sign of the times …

People can’t handle their shit.  And by shit, I mean liquor of course.  Put that many gays–a lot of ’em half-naked in one city, add some liquor into the mix, then shake and you’re bound to get some half-baked gay drama.  There is nothing more embarrassing and sloppy than witnessing two lovers quarrel in the open street in front of innocent bystanders.  I hate to say this, but the telenovelas tend to be a big trend among my Latin folk.  I witnessed too many of my Latin sistas facing each other down in full on public display of aggression.

My lesbian sistahs are not too far behind.  It’s sad when you hear a hefty lesbian scream at an inebriated lipstick lesbie something along the lines of, “Leave him alone!  He’s gay! Why do you always do this?”  That’s just heart wrenching.

And how about that Dragorilla at the parade?  This half-woman/half-wildebeest can be very desensitizing.  When you get exposed to so many levels of wrongness on a frequent basis, nothing can shock you.  I actually found myself spreading a rumor that he/she is really a cross dressing heterosexual man, just to add to the wow factor, like she needs anymore pow to make her/him/it interesting.  The truth is Draggy remains a mystery.  I don’t know where she lives, or what her deal is.  And I hate to admit that I would miss her if she ever went away.

It got painful towards the end, but I must admit that I had fun.  People can bitch all they want about the parade, but people keep coming back year after year judging from the massive sea of rainbow colored bodies that streamed down Santa Monica Blvd, as far as the eye could see.

Step back and watch the bitches unravel (more photos to come).