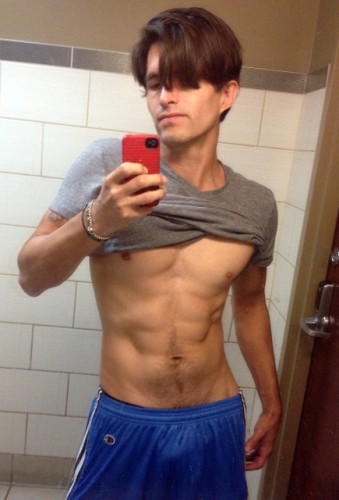 Get a boyfriend and the chances of getting a pooch in the midsection are very likely (and I’m not talking about a furry, four-legged K-9 friend on your belly either, although we do have one of those also who loves to take naps on and around the gunt area).  Of course, I still workout, but not with the same fervor one does when one is single and looking for admiration, affection, validation and love.  Huffing and puffing at the gym is no longer the big priority.  I mostly do maintenance to keep the fat at bay, cuz if I’m not careful, I go from a six pack to a four pack and life as I know it, just ain’t the same.

However … get braces in your face and you inevitably go back to being sucked up again.  It’s not that you don’t want to eat, it’s more like you can’t.  I sat on that periodontal torture chair with wires coming out of my face and the dentist nonchalantly gave me a list of don’ts.

Also, no popcorn!?  Ask anybody; I will fuck up a big bucket of popcorn at a movie.  Show up with one tub and I’ll be like “Where’s mine?”  Or, “Did you not want any?”  I hate sharing.

My dentist didn’t say anything about coffee.  I didn’t ask.  I imagine coffee has some teeth staining components, but I don’t drink alcohol, I don’t do drugs, so coffee is my only vice.  Ain’t that some shit?  I wish I didn’t, but I love my cup of Joe in the morning.

The hardest part of the braces, aside from the pain and discomfort and wiping a smile off your face, is the no sugar.  Sugar builds an acid around the brackets that stains your teeth.  I hear permanently.  Don’t nobody got time for that.

I’m not big on candy–especially the sticky kind (I don’t like anything sticky to be honest with you), but I do love me some cookies, cake and chocolate of any form.  It’s no newsflash that sugar is bad for you.  Sugar causes type II diabetes, sugar keeps you craving for more, it keeps you hungry, sugar makes you fat and sugar kills blood cells, so sugar also makes you old—well time makes you old, but sugar makes you look it.  And if you think sugar is not addictive, try giving it up for a few weeks.  Then have some cake and see what happens.

Almost everything has some form of sugar in it, but I went without excessive sugar–meaning no cookies, cake or chocolate, for about 3 months, which is the most time I’ve been able to put together thus far.  My shit was tight!  Then I had a birthday party for 5 years of sobriety and found myself before a Lady Jane strawberry cake.  I didn’t want to be rude.  The minute I felt that buttery sweetness touch my palate, I felt tingly all over like I was getting a fix.  I could feel my brain releasing an enormous amount of dopamine and I found myself partaking in some award-seeking behavior.  That cake didn’t stand a chance.

Sugar is addictive, it’s bad for you and it’s evil–period.  But it tastes so damn good, I don’t know how I’ll get through.

In West Hollywood they say you could never be too tall or too skinny.  I’m not so sure about the skinny part.  I don’t know about you, but a six-pack usually comes with a price.  If I see my ab muscles protruding from my torso, then I’m also seeing some severe high cheekbone action protruding from my face.  I get super sucked up, which was cute in the twink years, but not so much as a grown man.  People start to ask you if you’re OK.  People start to wonder if there’s something you’re not saying.  And you get the gist.

I’ve always been the type of guy that could eat whatever he wants and not get fat.  I sooo don’t want to push my luck as I get older.  Beefy, hairy and lazy is all the rage these days (guys walk around unshaven with bed head and act like it’s cute), but I’m stuck at a place in time when smooth and lean is the way to go.  I’ve never been one to shave my legs, but a swimmers build was always my goal even though I rarely partake in any form of water sport.

Having braces in my face has me back on super skinny status, which is great for the summer, but I have to be honest with you, it’s more circumstance than choice.  I want to eat, really I do, but then I think about shit getting stuck in my brackets and wrapped around my wires and I find myself too damn lazy to brush my teeth.  I’m like, fuck it.  I’ll eat later.

So here’s the deal, you wanna loose some weight?  Get some braces.  You’ll be super skinny in no time.

GIVE ME BARE BODY RIDES I KINDA LIKE THE NEW MARIAH CAREY SONG, #BEAUTIFUL