ANOTHER MYSTERY MEMORIAL GOES UP IN WEST HOLLYWOOD 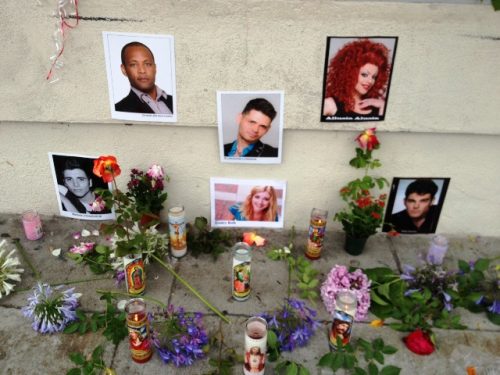 I almost forgot to mention that another bizarre memorial went up in the heart of WeHo last weekend–this time in front of newly deceased The Palms Bar.  It was like watching the aftermath of a mass murder with the flowers, candles, balloons and … um … the professional headshots of six people lined up against a wall on Santa Monica Blvd.

People walked by and they were like, “Is this a joke?”

It would be a twisted joke, considering a bus driver was shot and killed in front of the palms bar about a year ago.  I looked for any form a punchline via their Facebook page, but could not find any.  It appears to be a serious deal.  According to signage on the storefront window, it looks like these people actually perished at The Palms over the years.  The fact that these people all have a headshot in common could just be one of those West Hollywood coincidences. 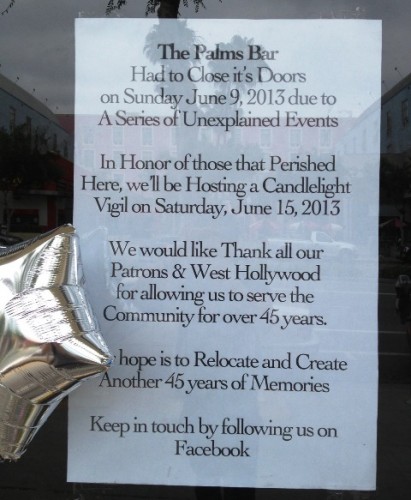 The sign only makes the scene weirder, by stating that the Palms closed down due to a “series of unexplained events.” What does that even mean?  I thought the events leading to the closing of The Palms were explained simply enough.  Corporate monster shuts down the oldest and only lesbian bar in West Hollywood in favor of making more money with the development of condos and retail space.  The end.  I wish someone would explain the “unexplained events” mentioned on that sign. The whole scene is bizarre.  I witnessed people walk by, look down at the memorial and then keep walking.  It’s like WAKE UP people.  Weird shit is happening all around you while you pretend to be busy looking down at your text message box.

So I’m putting it out there, cuz I’m a nosy bitch.  Anyone know the meaning of this memorial? 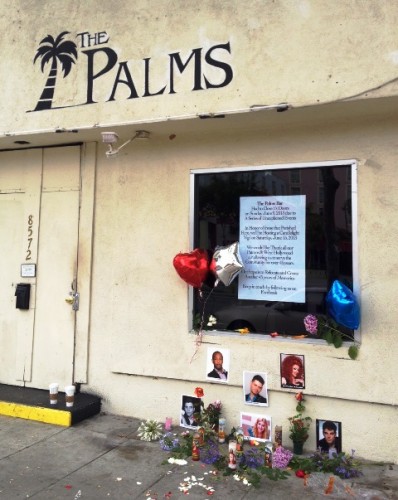