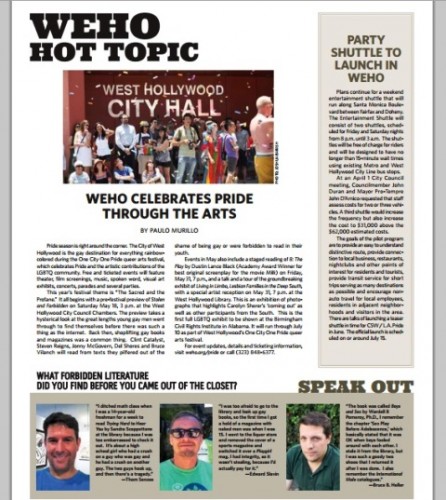 As some of you may or may not know, I write the WeHo Hot Topic page for FRONTIERS Magazine.  I write a main feature with a smaller byline story as well as the Speak Out portion of the page where I do man-on-the-street interviews of random folks in relation to the main story.  The latter being my favorite part of the page because it challenges me out of my comfort zone to talk to strangers and then convince them (beg them) to lend me their voice and image for my little page.  I assume everyone wants their photo in a magazine, but I stand corrected time and time again when people blow me off because they don’t like having their picture taken; (whispering) I do hate these people.

With G Pride approaching, I decided to highlight some pre-pride events in WeHo.  This year’s festival theme is The Sacred and the Profane. There’s a pre-festival preview of Stolen and Forbidden this Saturday May 18, at 3 p.m. at the West Hollywood City Council Chambers, which is basically a hysterical look at some of the crazy shit young gays did to get their hands on homo books and magazine (smut magazines, I’m sure), waaayyy back when, before you could just Google gay sex on the net.  Needless to say, shoplifting of forbidden gay paraphernalia was the norm back then.  A bunch of gay men who would grow up to become Clint Catalyst, Johnny McGovern and Bruce Vilanch, to name a few, will read from forbidden texts they pilfered (pilfered sounds so much better than straight up STOLE) when they were young, gay curious kids.

For Speak Out, I asked what forbidden literature my men-on-the-street got their hands on when they were in the closet, which was really my polite way of asking what gay books or homo magazine they stole when they were kids.  One guy ditched class to hideout in the library and read a novel that had a gay guy-on-guy twist.  Another guy straight up switched a Sports Illustrated Magazine cover with a Playgirl mag cover and walked up to the register to pay for his sports mag with a bunch of limp dicks inside (if there’s a gay, there’s a way).  My last guy straight up stole a book about boys and sex from his local library, but then he returned it after he was done.  This guy also reminded me of the International Male catalogue where European designers tried to pass off pirate shirts and ladies tank tops for gay men’s apparel, but I mostly remember the underwear section which didn’t leave much to the imagination

Of course the subject made me reflect on my own … um … pilfered and forbidden literature when I was trying to make sense of my sexuality.  It’s really hard to say when or what, because anything that resembled “gay” was forbidden in the Murillo household, be it the Nancy Drew books I was obsessed with in the 4th grade, the Madonna magazines and clippings I collected well into my adult years–not to mention the Sweet Valley High books I would read when no one was looking (I remember Elizabeth and Jessica Wakefield; they were beautiful blonde, blue-eyed twins–except Liz was a good twin who loved books, while Jessica was an evil, conniving cheerleader who loved wearing makeup and short skirts … I loved Jessica Wakefield).  My mother would have book bonfires in the backyard like they did in Auschwitz.  By the time I hit high school, the poor woman didn’t know what to do with me when she found The Satanic Bible by Anton Szandor Lavey tucked under my pillow with quotes neatly highlighted by yours truly—“Satan represents indulgence, instead of abstinence.  Satan represents vital existence, instead of spiritual pipe dreams. Satan represents undefiled wisdom, instead of hypocritical self-deceit. Satan represents kindness to those who deserve it, instead of love wasted on ingrates.” And you get the gist (evil grin).

It seems like I have always known or had an idea about gayness and gay sex for as long as I can remember.  I recall ripping the pages off of Playgirl magazines at my local liquor store because I was too much of a puss-puss to pilfer the entire mag—and seriously though, how ’bout them Playgirl magazines?  The magazine for women seriously sucks where penis is concerned.  I remember the men were mostly limp with plucked pubes and I absolutely detested the long Chippendale Fabio locks that women seem to find so sexy to this very day.  It still didn’t stop me from pilfering the forbidden though.

The first time I ever came across a hardcore gay mag in all its up-close and erect glory was a beat up copy of In-Touch magazine that I miraculously found protruding out of some bushes while I was minding my own business walking down a street.  I don’t know if the mag was tossed my way from heaven, from hell, or from a moving vehicle, but there it was with some graphic depiction of man-on-man action.  I was super skinny with protruding ribs, so the mag fit perfectly stuffed in my pants and jammed up my rib cage.  Smuggling it into the house was beyond scary.  Making sure my mother never found it was the real challenge.

Forbidden literature also takes me back to the first time I walked through the swinging doors of the dirty gay boy section of Circus of Books located on the dirty side of Santa Monica Blvd.  There is a lot to be said about innocence lost when I think about how I could not step down those isles without walking around all pigeon-toed with uncontrollable wood protruding from my belly button.  I had zero control back then.  The shit kicker being that nowadays it’s like nuthin’ down there when I skim inside a forbidden mag.

Nobody forgets their first time.  I recognize that forbidden literature in the print format is mostly a unique experience to the XY generation.  I can’t decide if I envy young kids of today with their Internet and Google and Tumblers and Grindrs.  The forbidden is found faster, easier and it’s waaayyy harder and more graphic than what I recall in those early innocent years.  I imagine faster/easier/stronger is also the speed by which innocence to the forbidden comes and goes.

Question for you:
What forbidden literature did you find before you came out of the closet?

Oh yeah, check out the latest issue of FRONTIERS which is out right now. 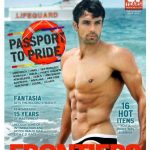