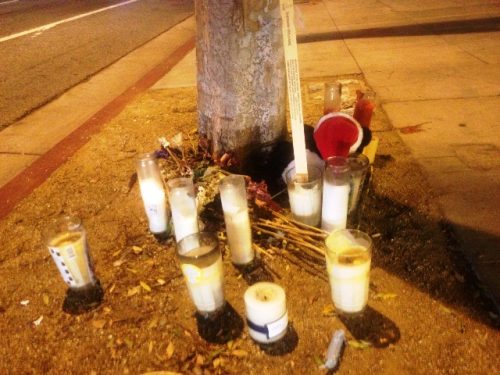 Seriously people?  Who died here?  This memorial popped up out of nowhere on Friday, May 10 on the corner of Santa Monica Blvd and Huntley Drive.  There’s no name, no photo, no letter explaining the cause of death and nothing was mentioned over the WeHo wire about anyone being killed by a car or murdered on the street.  The memorial is still up two weeks later.  Somebody is clearly still lighting candles, but WHO ARE THESE CANDLES FOR???

I’m tripping out because whatever went down, it happened the previous night on May 9.  Believe it or not, I happened to be on that same corner waiting for my partner to pick my ass up that previous night.  I guy in flip flops was leaning against a railing in front of the My 12 Step Store parking lot.  I remember this guy because he looks so much like my ex Eric, it’s scary.  Anyway, he’s leaning.  I’m standing.  The next thing I know, I hear a crazy–I’m talkin’ INSANE skinny twink queen screaming at the top of his lungs up Huntly Dr.  I remember distinctly hearing that twaked out queen screeching, “You!  Yes YOU!  Don’t walk away from me! I’m going to kill you!”  He was harassing some guy who turned the corner on Santa Monica Blvd.  The guy was walking at a fast pace to get away.  I got the impression that they didn’t know each other—oh yeah, the skinny queen was holding a giant bottle of wine or Champagne.  That bitch was fucked up.  Shortly after, my partner picked me up and that was that.  The guy in flip flops was still leaning against the railing when I left that corner.

The next morning, I faced the memorial.  People on the street did a double take, but they kept stepping. 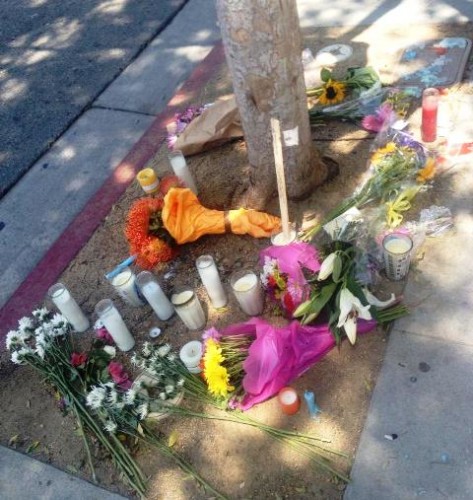 So this is where it gets weird.  Somebody put a card next to the candles.  After seeing that card every time I passed by, I decided I couldn’t take it anymore; I ripped that envelope open when no one was looking.  But that card raised more questions than gave answers.  The tone gave the indication that someone was taken too young and that he will be missed … like he died very recently, it didn’t give any hints that this was a memorial for someone being remembered after dying a while back.  Then a teddy bear manifested between the candles one night.  Why does this teddy bear have a Santa Claus hat on? Did this young person die over the holidays?  So damn weird.

Anyway … you’re reading this here in case there’s any question.  If somebody ever guns me down on Santa Monica Blvd, there had better be a mountain of flowers with a giant portrait and a plaque hammered to the closest tree explaining EXACTLY what happened.  People deserve answers!

But in all seriousness … and morbid curiosity aside, whoever passed away on that corner was clearly loved and is dearly missed.