HOLLYWOOD HIKE TO THE LONELY TREE 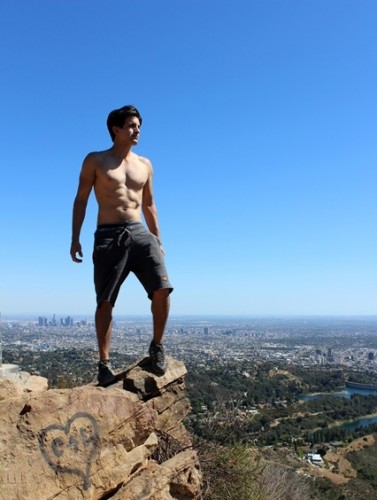 Growing up in Los Angeles, one can sort of forget about the small wonders that this city has to offer.  It’s so easy to go on and act jaded and OVER it, when in fact one has never actually DONE it.  Take the Hollywood Sign for example; I tend to forget that it’s there.  I tell myself that I don’t really care.  I yawn and act like I’ve been there when in fact I have NOT!!! 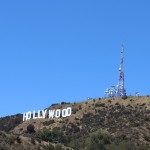 My friend Temple Drake (not his actual name) invited me to hike up to the sign.  However, he wanted to go past the big sign close to the sky and find some sort of tree that’s located off the beaten path, which people think is some sort of big whoop-whoop.  Blogs and websites are built around this tree, which is known as The Lone Tree, The Burbank Tree or the Tree of Wisdom.  Of course, I was like, “A tree?  What tree?  For reals? Nobody told me.”

The tree stands out at the top of the Barham Pass.  Nobody knows how it got there, if someone put it there or how long it has been there.  It’s just perched on top of the Hollywood Hills daring you to come find it.  I never would have known about it–let alone found it.  Leave it to a transplant from Kansas to get me to do the Hollywood sign hike.  For the first time.  In my entire life. 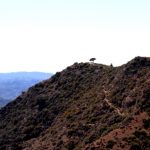 I showed up for our hike with a pack of gum in my pocket and my Canon rebel 3ti hanging around my neck all kewt estilo style.  Lucky for me, Temple came prepared with extra water, 70 spf sunblock and a spare walking stick, which came in handy when my janky knee starting acting out in the middle of the hike.

The tread to the Hollywood sign, or behind the Hollywood Sign was simple enough.  Most of it was a paved road to the very top.  I kept stopping to take photos and then asking Temple to take my photo, which didn’t help our target heart rate very much.  I decided to go topless, but almost put my shirt back on when we ran into some shirtless model/actor types with hot bodies and perfect tans.  I’m talking about gorgeous guys who feel a natural gravitational pull towards that damn sign.    These shirtless dudes didn’t have a single ink marking on their bodies.  I hear tattoo-free bodies are the new rebel yell these dayz. 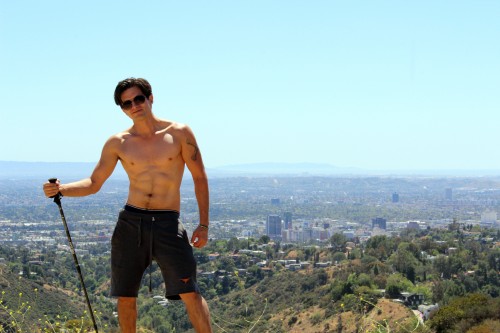 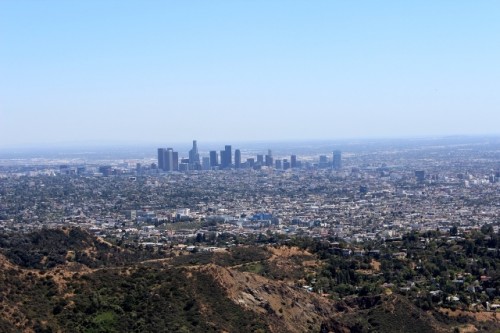 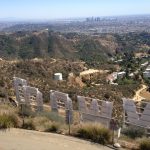 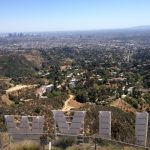 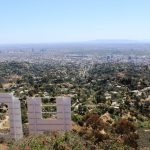 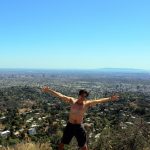 Getting to that damn lonely tree was a whole different story.  The terrain was rough and if you aren’t careful, there’s a 1000 ft drop threatening you on the Burbank side of the hill that will surely make you into a Hollywood soundbite.  15 minutes–guaranteed.  Then there is the constant threat of rattle snakes, which put my teeth on edge—however all we encountered were bees, bugs and a bunch of lizards.

Temple kept leaving me behind while I took photos of the nature.  How embarrassing would it be if I got lost in the Hollywood hill?  Hikes like these remind me of that little kid that got lost in some woods many years ago.  He was out in the wilderness for days.  It turns out he was hiding from the rescue search team because he was told not to talk to strangers.  People were calling his name and this dumb kid was hiding behind a tree—STRANGER DANGER!!!  That story always cracks me up.

We finally made it to the Lone Tree/Burbank Tree/Tree of Wisdom at the top of a ledge.  The tree was a lot smaller than I imagined.  There was nothing magnificent or significant about the tree, other than it was up there by its lil’ lonesome.  The trunk of the tree has two tool boxes chained to it.  They were like metal God Boxes where people put poetry, prayers and little notepads inside.  I didn’t bother to read any of the messages, because (a), it felt like an invasion of someone’s privacy and (b), I found the idea rather boring.

“So now what?” I asked Temple Drake after circling the tree a few times.  Then I turned away from the tree and was almost knocked on my ass by the incredible view.  The Lone Tree had a MAGNIFICENT outlook towards the better half of Los Angeles, Hollywood and the view curled to the farthest reaches of the valley.  It’s been windy these last couple of days in Los Angeles, so the sky was as clear as it will ever get in this city that’s mostly shitty.  You could see the Catalina Islands from up there.  Being the only ones by that tree gave the experience an added surrealism.  Temple walked to the ledge and showed me the stump of a flag pole, where he says they raised an American flag in memory of 911.  He also tells me that the flag was stolen, but I’m not sure if that’s true.  “We should put a rainbow flag up here.” I told him.  “Just to make a point.”

I had Temple take what has to be one of my favorite photos ever!!!

We went back to the tree, for one final look.  That’s when I noticed a random sign hanging inside the very top of the tree.  It looked like a Christmas ornament of sorts with an ornate question mark printed on it.  Who put it it way up there?  What does it all mean?  Who are we?  Why are we here?  Can you take my photo climbing the Lone Tree?

When I climbed down from the tree, I noticed I had blood on my fingers.  I took an inventory of my limbs, but could not find a cut anywhere.  Then I found a small gash by my ankle.  This would be the only injury I would sustain on our hike.

“That Tree of Life is trying to KILL ME!!!”  I pointed an accusing finger.

“It’s the Tree of Wisdom,” Temple corrected me. “And it doesn’t like being mounted,” he added.

Anyway, below is an assessment of our hike.

If you’re an Angelino who acts like he’s been there, but hasn’t actually done it, then I recommend you get over it and DO IT!!!

Then again, you could be dead inside, so maybe not so much.