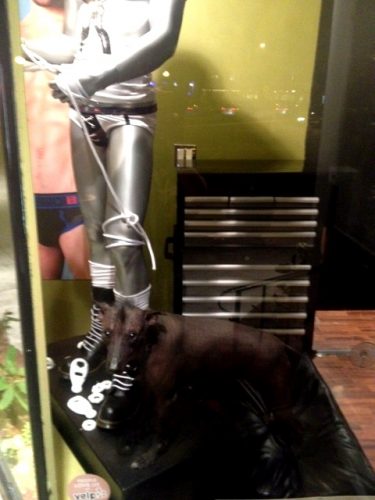 There is evidence that evil exists in the world–that’s for sure, but I’m not much of a believer in the devil; at least not in the biblical sense of the word–not much more than I believe that God is a white man with a white beard looking over a white fluffy cloud.

My mother never made a believer out of me or my siblings.  She never took us to church or taught us any form of religion, but you best believe that her mother and her mother’s mother were very religious in the Catholic sense.  That means I come from generations of superstitious folks who believe in spirits and witches and of course the devil.  El Diablo has taken many forms in the most innocent of creatures, be it a toad, an owl, a crow, a rooster, and the more traditional snake and goat.  The devil has also been found in cats and dogs.

I mean it, I don’t believe in the devil—How … EVER, for a split second I SWORE I came face to face with “El Chamuco” when I walked past that 665 leather and kink sex shop that’s located on Santa Monica Blvd the other night.  665–one number short of hell–that is their slogan, but really it’s one number short of the symbol of the Beast.  This place loves it and owns it.  The store likes to play up the dark side of kink with freaky window displays that include mannequins in a cage, leather masks, body bags hanging upside down and other torture devices that make the average wanderer take a moment before the window display and wonder, “Where does THAT go?”

I’m by that place a lot, so I thought nothing about their window display when I walked past with my phone on hand in mid-text. Out of the corner of my eye (the good one), I saw what appeared to be the headless shape of a silver mannequin.  It appeared to have a black stuffed dog in a leash, or some form of evil looking creature that could well pass off for a hyena. 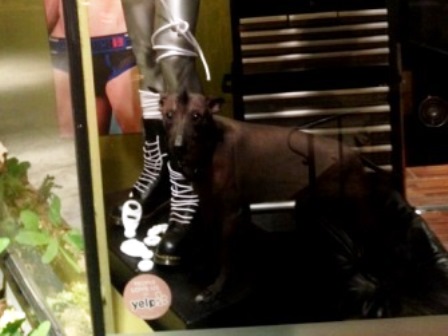 I lowered my phone in slow mo.  This creature looked real.  I don’t throw the word “ugly” around too loosely, but this animal straight up had no alibi, it was so damn u.g.l.y.–UGLY!!!  We sort of stared each other down.  I’m still thinking it’s fake–made of resin with faux fur.  It appearing to be looking right at me, motionlessly.  Then this beast jumped up unexpectedly from behind that glass, and I let out the most emasculating SCREAM I never knew I had in me.  It was more like a high pitched yelp, because I tried to catch it as soon as my diaphragm pushed it out of my throat.

I quickly realized it was a real live dog, or someone’s twisted idea of a dog that was shaved down and groomed to sport a creepy looking fauxhawk coming out of its head to make it look like some evil devil dog from hell straight out of The Omen movie.  It didn’t look ferocious … it just wasn’t pretty.  And the lack of prettiness startled the shit out of me.

Of course, I looked around shame-ridden to see if anyone heard me scream like a queen, but the few people that were out at the moment were too busy looking down at their phones in mid-text to notice a screaming queen on the street.

This poor creature was an appropriate fixture for this sort of store, but I wondered who would do this to a dog.  then it occurred to me that a dog would never survive looking like that in the streets of Mexico.  They would hunt it down and then torch the town where it came from–“Ay!  El Diabloooo.”

I took a bunch of pictures, cuz that’s just what I do.  After staring at it long enough, it didn’t seem so scary after all.  In fact … it got kinda/sorta cuter in a weird ugly sort of way.  I mean, look into those eyes … 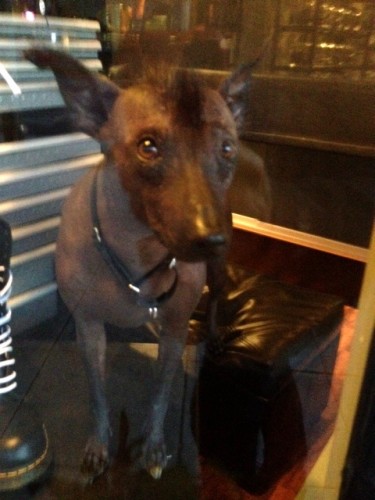 “Isn’t that the weirdest looking dog you’ve ever seen,” I asked a guy that was walking down the street, cuz that’s what I do, I talk to random guys in front of leather sex shops.

And the guy responded, “What dog?”

The window-front was empty.  The dog was gone.