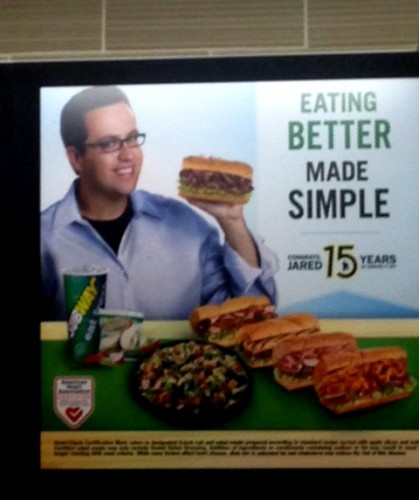 The very best thing about a Subway sandwich is that it doesn’t matter which sandwich you order, they all tend to taste the same.

I got a taste of the bitter pill that can be the WeHo lifestyle the other day while I waited to order a club sub at the Subway on Santa Monica Blvd in the heart of Boystown.  There were two supreme queenie beings standing in front of me pulling off twinsie brightly colored getups, while they hid behind wayfarer shades—I’ve said it before, and I’ll say it again: only two kinds of people wear sunglasses indoors.  Blind people.  And assholes.

These two bitches were not blind.

Anyway, one of the twinsie queens started reading an ad by the Subway menu out loud with a sibilant voice. “Congratulations Jared,” he read slowly, deliberately trying to sound like a 3rd grader.  “15 years of keeping it off.”

There was a pause.

“Jared is still fat” one of them spoke with a snort.

“Very fat,” the other one added flatly.

They were referring to a smiling photo of that guy Jared whatever-the-fuck-his-last-name-is holding up a big ass Subway sandwich.  I hate to admit it, but I was forced to concur with the evil twinsie queens.  In the ad he’s wearing this ill-fitting over-grown office work shirt that gives him that oh so certain big look.  Then you add the horrible airbrush job to his face and poor Jared is left looking like a hefty lesbie.

We all know the Jared story.  We’ve all seen the famous photo where Jared is holding up a pair of overgrown pants to let you know that he lost a shitload of weight … supposebly–err, I mean supposedly he shed the pounds on a subway sub diet.  He’s the Subway success story,  inspiring millions to get small on a hoagie.  So why, oh WHY is Jared still dressing like a fat boy?  Does he suffer from a severe case of ghost fat (it’s kind of like a ghost limb, where the weight is gone, but people still waddle like they’re carrying extra weight and they pick out overgrown clothes because they still see a big person in the mirror).  And has it REALLY been 15 years!!!??? 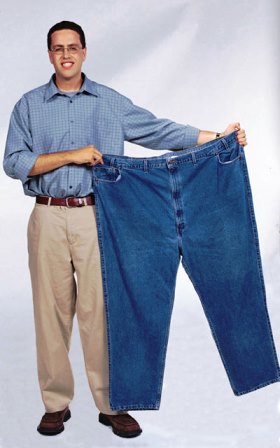 I’m forced to wonder.  Does that photo of Jared 15 years later represent a man who has kept the weight off?  Is Subway Inc kidding itself, or do we queens have a twisted idea of what normal weight is supposed to look like?  Why do I see a heavy guy?  Would a doctor consider Jared normal sized?  Is the twisted fat vs non-fat body dysmorphia a gay thing–meaning do women look at Jared and think he’s kept the weight off?  Is it a WeHo thing?  Or just a stupid self-loathing thing?

I leaned back in line and gave the evil twinsie queens a quick up-down look-over.  They are both in their early 20’s.  I could tell that one is already showing signs of a pear shape forming in his young little body.

That’s when I decided to order the Subway Club salad instead of the sandwich.  Oh yeah, and hold the damn cheese please.