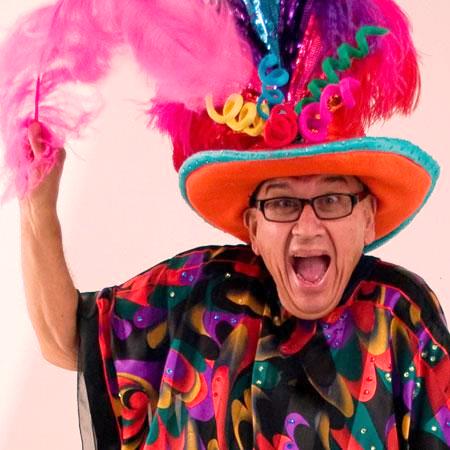 People die.  Especially the old ones.  I just learned that gay cabaret entertainer Rudy de la Mor passed away this month.  He was 73.

Rudy de la Mor entertained the LGBTQ community for decades.  Crazy hats, a big mouth and twisted sense of humor were his trademark.  He was a classically trained pianist who was part of the Orange County Symphony Orchestra and the Denver Symphony Orchestra.  He was well-known in Chicago where he performed for 20 years, before he hit California, where he had stints in Long Beach and Palm Springs.  He was doing the boat cruise circuit on the final days of his career.  One was scheduled to perform in a cruise as recently as March 9th of this year.

According to news reports, on Feb. 5, he posted on his official Facebook page, “To all my dear friends: Thank you all so much for your kindness and support as I slowly recover from my illness. Your thoughts and prayers have given me strength and encouragement. I shall see you soon!! Woooosh! Love Rudy.”

The public learned of his death on March 5.  Craig D. Goldsmith, a friend and fellow entertainer, posted the following on Rudy’s Facebook page: “A great many tears will be shed for the loss that we feel right now. A great amount of joy must also be spread to have know someone so special! Also to know that his was a life well lived and lived well!”

I was asked to interview Rudy De La Mor back in October of 2008 for IN Magazine.  It was a turning point for me when I agreed to do the interview on account of I used to devour personalities like Rudy with a can of Diet Coke back when I had my biting moment as a trashy columnist.  I would have subjected poor Rudy to total humiliation before giving his show a plug, cuz that was my trademark back in those dayz.  But alas … 2008 was a new moment for me.  I was so damn happy to be writing again and seeing my name in print, that I would take ANY writing assignment — not that interviewing Rudy de la Mor was beneath me; I recognized that he was a survivor.  One look at any of his photos and you knew this big queen did it the hard way, his way with zero apologies.  I  always appreciated vintage entertainment of his caliber, even though he seemed to rely heavily on crowd participation, which I absolutely detest.  For the record, I promised to catch his show at the end of our interview, but never made it.  I wish I had.

Below is my interview of Rudy de la Mor for IN Magazine.

I do hope he was pleased with my efforts.

Hats off to piano man, comedic entertainer and gay personality Rudy de la Mor.  He has been making us fall back with belly laughs for the past 35 years with a raunchy revue that offers a night full of campy costumes and a large collection of crazy hats.  We landed a seat with the quick-lipped funny man who was preparing for his performance at the Paradise Café in Long Beach .  From doing ragtime at Disneyland , to delivering pizza to Mae West, this man’s life is truly a cabaret.

Can you take us to the early years of Rudy de la Mor?

In the early 60s I was the first piano player at Disneyland .  Then I went to Hollywood to play at a pizza place called Magoos in the early 70s.  It was very popular.  I had a deal with the delivey guys, if a movie star called, I delivered their pizza.  That’s how I met Mae West.  I knocked on her door and said, “Oh-oh-oh, I have a pizza for Mae West and it’s loaded with sausage, oh-oh-oh.”  We became instant friends.

When did your shows become popular?

Magoos burned down in 1974, so I worked at my first gay bar in Laguna Beach called The Little Shrimp.  Those days became legendary.  Clint Eastwood, Paul Lynde, Charles Pierce…endless amounts of celebrities. They were very kind to me.  I still have jewelry that Christine Jorgenson left me after she passed.  She had the first sex change in America .

What started the hat collection in your shows?

Martha Ray took me under her wing.  She was a famous comedian with a big mouth.  She told me “Rudy, you have a comedic voice.  Don’t wear tuxedos.  Wear your mother’s curtains and change into women’s hats.”  This was in 1974 and it’s 2008 and I’m still doing it.

What can we expect at a Rudy show?

They’re a lot of fun.  At the Paradise Café I play three hours solid.  It’s pretty much the same routine, so everybody knows their cue.  I’ll say, “I’m a great, big fat queen, but I’m a…” And the crowd yells, “Honest queen!”  The crowd participation is great.  The Uptown Grill in Palm Springs is more of a mainstream restaurant, piano bar, but everyone is welcome.  At 7 o’clock I play background music, while people have dinner.  At 8pm I sing a little bit.  Then at 9 we have a countdown from 10 to 1 and the crowd yells “Bullsh*t!”  That’s when the real Rudy de la Mor comes out.

Give us a highlight in your career.

What’s in store for you in the near future?

I’m seeing my friend Frank Moreno play Joan Rivers at The Riviera in Las Vegas . Then November 1stand 2nd Palm Springs is having Gay Pride; I’m gonna be in the parade.  Tell everyone on that Sunday I’m gonna be a big float [laughs].”