LIKE IT OR NOT – MADONNA IN THE FIGHT MAGAZINE 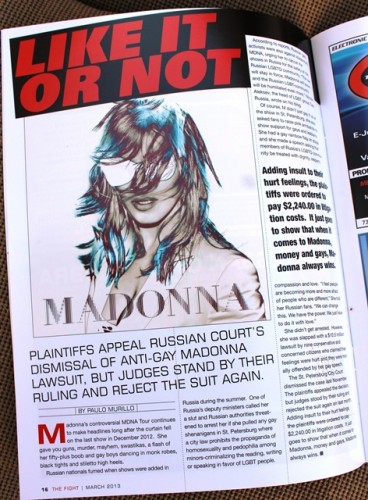 I completely forgot to post this lil’ ditty I wrote for this month’s issue of THE FIGHT magazine regarding Madonna and the shit storm she stirred up in Russia last summer with her MDNA Tour, when she spoke up for gay rights in St. Petersburg.  Up until last month, M was being sued for millions by a group of anti-gay Russian citizens because she dared to speak favorably of gay people in that quasi fascist country.

I reckon I was being cheeky when I wrote the ending line:  It just goes to show that when it comes to Madonna, money and gays, Madonna always wins.

Every time my gay friends start ragging on M, I always gasp and in the most uppity tone I could muster, I exclaim—“Shame on you!  After ALL she’s DONE for you!?”

My friends are either stunned into silence while they sort through their brains to come up with what she’s done in their favor, or they snap back with something along the outrageous lines of: “WHAT!? That bitch has done SHIT for me!”

I guess when it comes to Madonna and gays, the relationship will always be laced with some love and hate.  She’s done a lot to embrace and bring awareness to the gay population; she spoke for AIDS back when she didn’t have to (hate to go there, but unlike Gaga who never lost a friend to gay bullying, I say M gets more gay street cred for actually losing close gay friends to the epidemic back in the day).  She’s been our ally whether we like it or not, but gays haven’t exactly hurt Boy Toy Inc in the bank department; according to recent report, M just joined the Billionaire Club, which she completely deserves.  She’s worked hard, and she continues to inspire and speak for gay rights, so I say it’s a win/win.  But you know how it is; bitches can be shady.  Some gays REFUSE to give her the RESPECT that she’s ENTITLED to!!!

Anyway, I’m rambling. Below is the Madonna article.  It’s a quick read, so no excuses.

The link to The Fight website is as follows:

Madonna’s controversial MDNA Tour continues to make headlines long after the curtain fell on the last show in December 2012.  She gave you guns, murder, mayhem, swastikas, a flash of her fifty-plus boob and gay boys dancing in monk robes, black tights and stiletto high heels.

Russian nationals fumed when shows were added in Russia during the summer.  One of Russia’s deputy ministers called her a slut and Russian authorities threatened to arrest her if she pulled any gay shenanigans in St. Petersburg where a city law prohibits the propaganda of homosexuality and pedophilia among minors—criminalizing the reading, writing or speaking in favor of LGBT people.

According to reports, Russian gay activists were also against Madonna’s MDNA, urging her to cancel the shows in Russia for the safety of the Russian LGBTQ community. “The law will stay in force, Madonna will leave and the Russian LGBT-community will be humiliated even more,” Nikolai Aleksev, the head of LGBT group Gay Russia, wrote on his blog.

Of course, M didn’t just gay it up at the show in St. Petersburg, she also asked fans to raise pink armbands to show support for gays and lesbians.  She had a gay rainbow flag on stage and she made a speech asking that members of Russia’s LGBTQ be treated with dignity, respect, compassion and love.  “I feel people are becoming more and more afraid of people who are different,” She told her Russian fans. “We can change this. We have the power. We just have to do it with love.”

She didn’t get arrested.  However, she was slapped with a $10.5 million lawsuit by nine conservative and concerned citizens who claimed their feelings were hurt and they were morally offended by her gay speech.

The St. Petersburg City Court dismissed the case last November.  The plaintiffs appealed the decision, but judges stood by their ruling and rejected the suit again on February 7, 2013.  Adding insult to their hurt feelings, the plaintiffs were ordered to pay $2,240.00 in litigation costs.  It just goes to show that when it comes to Madonna, money and gays, Madonna always wins.

REGARDING GAY MARRIAGE EQUALITY THE UNFUNNY CAN BE SO DAMN FUNNY