HER NAME IS DITA – “STRIP STRIP HOORAY” THE BURLESQUE EXTRAVAGANZA 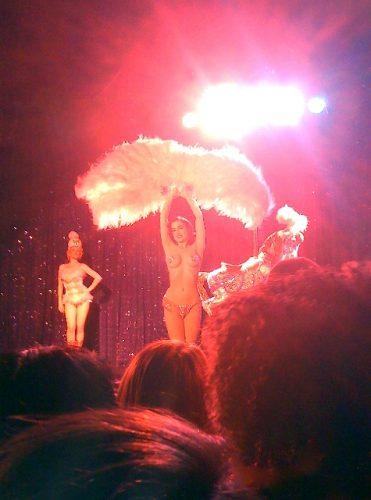 I went to see Dita Von Teese last night at the world Famous House of Blues on Sunset Boulevard for her “Strip Strip Hooray” burlesque extravaganza.  This was the last show in Los Angeles before she makes her next stop in New York.

“My name is Paulo Murillo,” I told the man holding the clipboard.  “I’m on the list,”  I informed him with an air of importance.  My name was supposed to be on the VIP guest list, but funny story: I was NOT on that VIP list.  The door guy scanned that wretched clipboard up and down, but could not link me to any name I came up with that was connected to this show.  It’s been YEARS since I’ve had to bullshit and charm my way past a bouncer at a muthafuckin club.  I’m a little rusty, but guess what, I got in.  Sold out show, and I was like “Excuse me. Coming through.  Thank youuuu.”

The last time I caught Dita Von Teese’s Strip-Strip Hooray show was at The Roxy back in 2010.  The venue wasn’t my favorite, and Dita was so late that we got tired of standing (Who does she thing she is?  Madonna? Ticket prices were actually very Madonna – a good seat cost anywhere from $250 to $500 a pop)?  Last time, we actually left before the big finale, so this time I wanted to get it right and show up a little later to meet her halfway.  Of course, I got there too late; I missed her opening number.  DAMN!!!  I’ll get it right at some point. 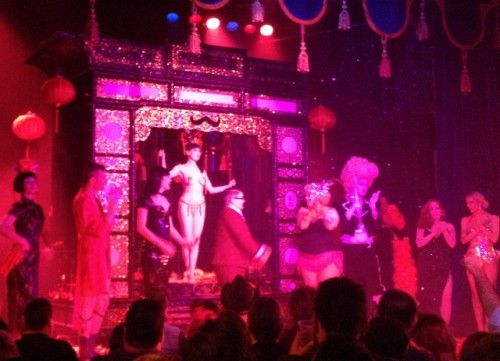 What can I tell you, that hasn’t been told about a Dita Von Teese performance?  It’s all in the details darrrlinks.  No rhinestone goes unchecked and unglued, and everything that glitters and sparkles is sprinkled to perfection.  Her body sways and swoons and tilts to show the right curves and her face is angelic–even if her expression looks slightly bored.  From a gay guy’s perspective–and I’m sure all the ladies that show up for burlesque in their pinup girl drag will agree–there is no denying the entire production is pretty–if not pretty perverted.  We like pretty.

At the last Dita show I attended, my connection was Selene Luna.  This time, my connection was from a connection of a connection to Prince Poppycock who gave you live opera singing while he stripped down to paper white skin.  He went from this flamboyant boy in Dangerous Liaisons drag with a giant pompadour wig, to a naked porcelain doll in a leather thong.  He was hilarious and the crowd loved him, but I mostly know the guy who played his disgruntled butler who picked up all the articles of clothing being discarded around the stage. 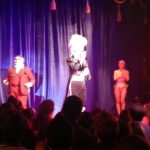 Security was tight.  I took a photo of Dita doing her thing, and a bouncer straight up tapped me on the shoulder and told me, “I’m sorry sir, but I’m going to have to ask you to delete that photo.”  I was like WHAT!!!???  And he stood there while I deleted the pic too.

How-EVER … as you can see, I still got some muthafuckin shots last night (just to make a point), although not very good ones, but whatever, you get the gist. 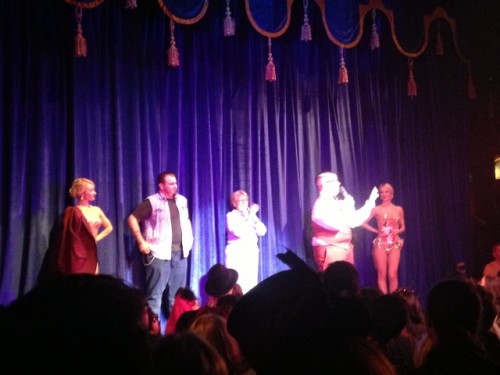 I was going to leave after Prince Poppycock, but host Mr Show Time-Show Time, Murray Hill was on his A game last night and the crowd was really responding.  Murray said it was a night of firsts.  A guy went up on stage and proposed to his girlfriend who looked at that ring, shook her head and flat out said NO!!!  I couldn’t believe it.  The crowd screamed — I’m just kidding.  She actually said yes.  It was so damn sweet.  And then the crowd screamed.

However, the Murray Hill highlight of the night, was when he had three average Joes go up on stage and compete with an amateur strip tease.  We had a big fat greaser looking trailer park guy with shiny slicked back hair, we had a diesel dyke in a leather jacket—“This is the first time a lesbian has taken her leather jacket off, ladies and gentlemen,” Murray joked. And then there was Jerri–an older woman who seriously stole the show and kind of reminded me of Jerri Blank.  She did the pony to Gangnam Style—“Jerri-Jerri-Jerri-Jerri,” the crowd chanted–ala the Jerry Springer Show.  Jerri got so damn excited she straight up peed her pants.  Seriously.  I’m talking about a big wet stain in her acid washed jeans–“This is the first time we’ve had a woman piss her pants on this stage everybody,” Murray joked on cue.  The crowd went FUCKING NUTS!!!

It was wicked fun. 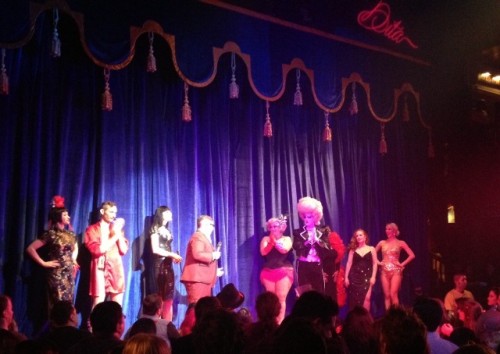 I was tired of standing, and I’m not one to go out alone, cuz it makes me feel like I have no friends, but I straight up didn’t give a shit last night.  I stayed for the entire show.  I even caught the big Dita finale where she did a geisha number that was simply devine.

I was supposed to have access to the backstage after the show via my connection, but if my name wasn’t on the guest list, so the chances of me having a meet and greet with Dita was probably not in the cards for me either; I didn’t want to push my luck by trying to charm my way past the velvet rope, so I called it a night.

Her name is Dita Von Teese.  You need to catch her show the next time she’s in LA.

His name is Prince Poppycock.  Look him up on youtube and click on the link below for his next gig in Palm Springs:

My name is Paulo Murillo.  Thank you for reading my blog.