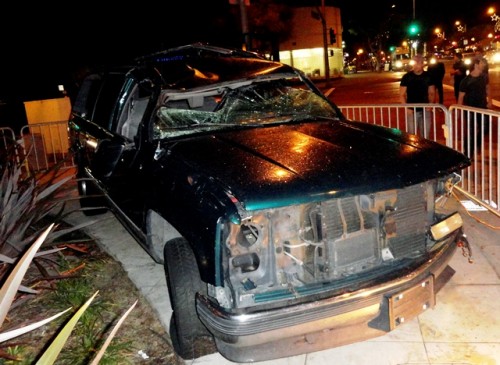 This ditty goes back to the crazy tweaker dayz.  This was about seven years ago.  My ass was on a mean one–I’m talkin’ about a disgusting 3-day run where I hadn’t slept in three days, and I was running on empty with nothing more than Gatorade and tweak in my system.  I had just crawled out of one of those gutters in the seedy side of Hollywood where dirty men go to do the dirty deeds that men do when they are influenced by dirty drugs (you know those places).

I’m not even gonna lie; my ass was behind the wheel driving under the dirty influence.  It was an ungodly dark hour like 4 a.m.  My internal clock was full speed, but my mind was weak.  I remember slapping myself on the face to snap out of my dizzy haze.  “Come on bitch.” I scolded myself. “You can do this.  Just 5 miles.  Less than 10 minutes and we’re home.” (We all know that scene).

Instead of heading home through a residential area like Willoughby Ave., I decided to “act as if” and get home via Santa Monica Blvd.  I didn’t trust myself around parked cars and I was weary of all the stop signs in the neighborhood.  I figured Santa Monica would be crawling with cops, but the boulevard would get me home faster.  I told myself that I was fine to drive as long as I ACT AS IF, dammit.

I will never forget it:  I was facing north on La Brea with my flashers signalling to turn left onto Santa Monica.  There wasn’t that much traffic at that hour.  One car was on the street in the oncoming section.  It was a white beat up van.  I didn’t dare try to outrun it to make my turn.  I waited patiently for the van to drive past me so I could continue on my tweaky way.  As the van drew close, it started to swerve.  That’s when my mind formed the dark outline of a crooked neck and a limp head leaning on the driver’s side window.  That shit happened so fast.  I saw the van’s headlights head right towards me at normal speed with the slumped figure in the drive’s seat.  The man was asleep or passed out!  My heart was already pounding out of my chest after some serious PNP, so I felt my stomach sink and my head was all tingly with fear.  I felt so powerless.  All I couldn’t do was honk my horn while this vehicle came directly at me.  Then I saw the white’s of the man’s eyes burst open.  He managed to turn the wheel and missed hitting me by several inches in a matter of several seconds.  All I ever saw was the shape of wild fear in that guy’s face as he sped past me, making my beaner mobile shake from being so close to me.

If that guy had hit my beaner mobile head-on, he probably would have killed me.  If I didn’t die in a head-on collision, I would have been hurt pretty badly.  And if had walked away from that car wreck, my ass would’ve walked strait to jail for possession and a driving under the dirty influence.  I had some shit on me and eyes were bugging out of my head.  There would’ve been no talking my way out of my twaked-out state.

Was it dumb luck?  Was it a god shot?  Whatever you wanna call it, that shit was close.  I didn’t know it at the time, but the stars were lining up for me to get clean and sober, but I’m not gonna lie, I still had many runs ahead of me–however, after night, I rode my bike to go do the dirty deeds that men do…

Anyway, I acted as if, and I made it home safely that night.

I still think about it constantly.  Of course the biggest fuck-over being that the bastard in that white beat up van was probably driving drunk.

SHUT YOUR MOUTH DO YOU STILL PNP?