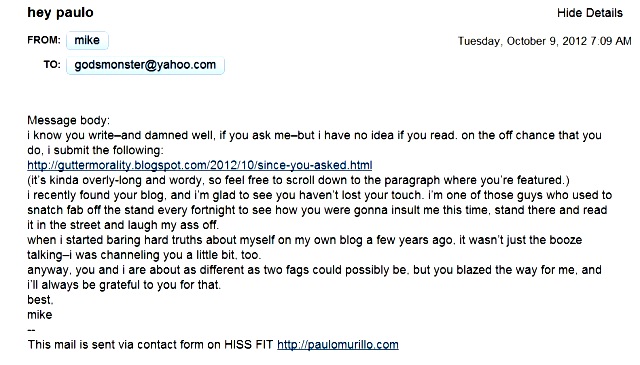 I received the email above via this hissfit blog last month.  The guy who simply goes by the name of “Mike” says that I inspired him to write, which I find simply amazing, cuz I was always out to shock and disgust, and offend–but never inspire.

The guy writes a blog called guttermorality, which I must admit, I absolutely love.  I responded back to him and told him so.  His confessions are dark and anonymous–like the sex he describes with boys half his age.  There is no photo of Mike, but there are a ton of screen captures of his text message box blowing up from would-be or has-been tricks.  What I love most about his gutter morality is that his scruples come from exactly THAT…the gutter.  Here we have a man who likes to drink and fuck on a regular basis.  He could be a good looking man judging from the text messages referring to him as handsome, but guys clearly want him for his dick as one blog blatantly suggests.  It makes me assume he must be well endowed or a smooth operator, for how else does one past forty lure a long list of twinks into his bed?

Guttermorality is well written, but I can do without the political paraphernalia and long-winded political news footage that tend to litter this filthy sewer.  It’s also clear that he’s too aware of the reader, judging from the way he explains and retracts himself in the comments portion of his blog.  I don’t like the hints of an apology brewing when he dives too deep into the gutter.  I would rather he take full ownership of his stuff.  I believe that even though one should have some courtesy to the person reading their drivel, paying a reader too much mind can fuck with your head as a writer.  I will point out that the only thing that he owns flatly and plainly is his self-will to drink and write straight-up-to-the-head-up drunk.

I fucking LOVE IT!!!

While Mike gives me credit where credit is long overdue (grin).  I do find it funny that he makes it a point to distance himself from the likes of yours truly on account of my kind of fag is different from his kind of fag according to one particular blog.  In his blog, he refers to me as a “weho man-about-town who was invited to the party,”–meaning that makes me less bitter than the fags who were left outside knocking on the door while party queens inside pretend not to be home. He–however–is the kind of fag who was invited to the party, but he would much rather trash that invitation unopened, than partake in such a silly frilly faggy little scene.  Not sure if it makes him a tragic lonely hunter, or if it makes him too cool for the room, but that’s the way breaks us down.  I’m this kind of fag.  He’s that kind of fag.

I get that we all have our own thoughts and our thoughts are attached to our own history–our own experience–our own dream state, and what people think of us is really none of our business because what people think of us has nothing to do with us.  I also get that we have no way of knowing, controlling, or changing people’s perception of us.  This is why I try not to take things personally.

I will say that “Mike” and I have more in common than he thinks.  We both have a certain kind of self-obsession/mixed with a need for acceptance that makes us–the morally guttered–do what we do, which is spill our guts before a public that may or not be out there.  Sure, I attach my words and thoughts to my actual name and face, which probably makes me more self-obsessed than the the average guy with the smarts to create a pen name, but we have a lot in common .  Writing is very isolating work, but the pay off being that we become masters of our own domain.  I seriously don’t know much about “Mike” but something tells me he’s a lot like me in that we both make the shit look REAL good on paper…err, I mean on a computer screen.

Anyway, I advice you to read the gutter morality.  It seriously inspired ME to write a little more.  Make sure you leave comments.  Tell MKF Paulo sent you.  The link to the blog where he mentions me is below.

Oh yeah, and PS…: I’m currently reading Ride a Cockhorse by Raymond Kennedy should ANY of you other bitches wonder if I like to read.