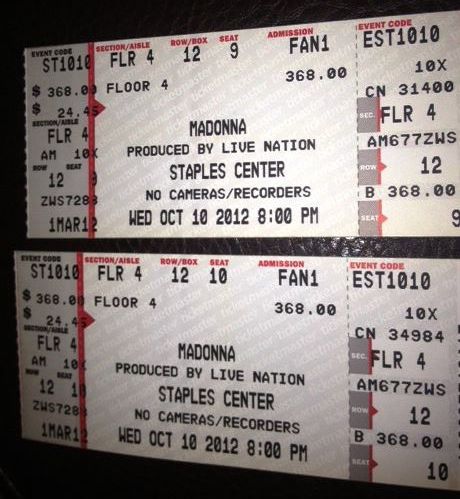 You thought I wouldn’t, but you best believe I DID,  cuz I told you I would.  Not only did I get my claws on a Madonna MDNA concert ticket, but you best BELIEVE I managed to get my ass on the floor only 12 rows away from the stage.  And what a relief that a got these suckers at face value this late in the game–and on EBAY no less…(long pause)…even though the face value for this ticket is only a few dollars short of $400.00 (gulp).

I have not made an irresponsible purchase like this in a very long time.  I can come up with 400 different ways that I could use this money more wisely, but fuck, this is me and she is Madonna.  Every time she has a concert, I keep thinking this will be the last time she tours like this, so how shitty would that be if I totally missed out.  Then a new album comes out and then comes a new tour, cuz that’s really where the money is.

My friend Stanky co-signed my “Buy It Now” purchase.  This is the same Stank that I flew to New York with to see M live at Madison Square Gardens only 3 rows away from the main catwalk.  Best seats ever!!!  So much work goes into an M concert that you can’t help but walk away inspired. Or so I tell myself to justify the ticket price.

Staples Center in Los Angeles is a shit venue.  I hate it. It’s actually the first time I ever saw her live.  I had prime seats to the side for the Drowned World Tour.  It was 3 days after the 911 attacks, so her heart was not in it.  The concert itself was darker than her previous tours, so it made for some awkward moments–especially when her face is projected on the screen with a black eye and a bloody nose.  She throws her head back like someone is kicking the shit out of her with hair flying everywhere.  Then she gives you a satisfied grin in the end.  So twisted.  I took my boyfriend at the time named Jeff, who wasn’t a hardcore fan, but still forked over $350.00 to see her.  He grew up a Mennonite, which is yet another one of my boyfriends with religious hangups.  He dumped me shortly after that Madonna concert, which is pretty much how it went down after the 911 attacks.  Life is too short.  People either got married, or they broke up.  So wierd.

Anyway, I’m babbling.  In three days, I will be watching Madonna live!!!  I’m sooo excited I can’t STAND IT!!!  I’m not crazy about the set list to be honest with you, but she’s still Madonna.

THE PROBLEM WITH GAY AA ACCORDING TO DUNCAN ROY HAPPY COMING OUT DAY!!!