THE PROBLEM WITH GAY AA ACCORDING TO DUNCAN ROY 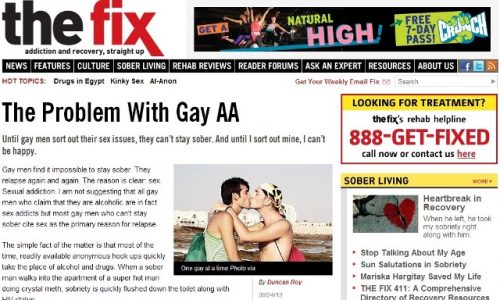 Recovery website The Fix (www.thefix.com) posted an article written by some asshole named Duncan Roy last week which delves into an exploration of sexual hangups, hypocrisy, internalized homophobia and resentments with the tabloid headliner that reads: “The Problem with Gay AA.”  Of course, every sober WeHo and WeHo adjacent queen is all up in a…”hiss fit” because he specifically calls out the gay AAs in LA.

In this piece of (sshhh), Duncan makes bold blanket statements about how them/they/those gay men can’t stay sober because gay men in LA are sex addicts, godless, sad, desperate and I quote: “Gay sober men often want a sober version of the life they [meaning we] had before, complete with dance parties, bars and go-go boys.”  He also hates that we hookup on Grindr.

I read this piece of (shiiieettt) and the first thing that came to mind was, “speak for yourself you bitch!  Don’t put your gay hangups and sexual dysfunctions on me.  I’ve got too many problems with gay A.A. of my own to be worried about yours.”  This piece (of shit) clearly comes from a gay man who wasn’t invited to the party–not even when he was in the midst of partying.

The gist of this piece (of dung) merely resonates another classic case of an unhappy queen with too many years dry but not enough days sober.  Yep, too many years/not enough days.  I’m referring to the ones that are quick to pound their chest and make no qualms about telling you that they racked up so many years of sobriety, but they can’t tell you the last time they went to a meeting.  I’m talking about those “old timers” who take it upon themselves to read you, right-size you, take your inventory, and then cut you off and give you the middle finger while you trudge the road to happy destiny.  I’m referring to sobers who know better; they speak the language, they quote the Big Book and they are still unhappy and bitter as bitter can be.  I’m referring to sober assholes.  My first thought was that this Duncan Roy is clearly one of these assholes who wants to enroll you in his hangups and have you co-sign his overall unhappiness with a group of people that did not meet his expectations.  There’s an AA bumper sticker for expectations.  I’m sure he doesn’t need to look it up.

Then I get phone calls from friends telling me that I could have written this article word for word (I gasped).  One friend said not to offend me, BUTTTT the article reminded him of ME in the sense that it was written to get a reaction, it was self-serving and attention seeking (words of wisdom from an “old timer”).  Essentially some of my friends think I’m a sober asshole also (what you resist persists)…which I reckon is fair enough, although you can’t compare what used to be the rantings of a crazy twaked out WeHo queen to the rantings of an unhappy queen coming up on sixteen years of sobriety.  In the very least I like to think that I’m a self-obsessed sober asshole who mostly uses “me, myself and I” statements.  Needless to say, I was offended.

In the very least, I also try not to knock it until I try it.  In his article Duncan Roy uses the sober party that is “Hot ‘n Dry” to touch on scantily clad, coffee-drinking sex fiends who can’t let go of the circuit scene.  He writes:  “Many of these sober parties are indistinguishable from their non sober equivalent: scantily clad men line up for espresso machines manned by disco short-wearing super hot straight guys more used to shaking cocktails than dispensing coffee to gay guys jacked up on caffeine. Unable to attend drug-crazed gay circuit parties, many gay sober men in LA flock to the sober circuit parties, such as Hot ‘n Dry, which is held annually in Palm Springs. These events are more likely to take someone out than any other reason I’ve ever heard in gay AA. Yearly, after this event, bedraggled gay men turn up at meetings, their eyes blazing from excessive drug use, taking newcomer chips. Should I be surprised? After all, the Hot n’ Dry ticket salesman had assured me that it would be “a sex fest from the moment you arrive at the Ace Hotel.”

Is that a fact?

I wrote about my problems with Hot ‘n Dry (emphasis on my) a few years back and of course I had a hail of shit flung at me from the gay fellowship—however, unlike Duncan, I actually attended the event.  For the record, it has never taken place at the Ace Hotel.  And aside from the scantily clad men you see by the pool (he would have LOVED me in my barely there x-skinny number the year I went), the event is hardly the equivalent of a circuit party with its elevator music blaring to inspire sober gay men to relax and chat—not to mention the endless workshops that gay sobers can partake in when taking a break from the supposed “sex fest.”

He does make some valid points of about the cultish clicks and sober grandees ruling over newly sober gay men who don’t know any better and how some men flay themselves before film executives in the hopes of catching crumbs from the sober table, but oh-my-fucking-GOD how NAIVE to think that sort of shit doesn’t go on in the realms of straight AA.

Then the guy writes about fucking a newcomer and the whole piece (of dookie) becomes a train wreck too painful to continue reading.  The whole point behind this diarrhea of the pen is that the writer has issues.  Sex issues.  Gay issues.  AA Program issues.  Some are sicker than others.  He admits he needs to get over himself and then as an afterthought maybe he should attend more meetings–maybe 90 meetings in 90 days.  Maybe.   The bowl of shit was stirred.  The end.

I was gonna write a rebuttal in the comments portion of The Fix.  But I re-read the title, “The Problem with Gay AA.”  THE problem.  Not his problem.  I picked up on its transparency and decided that writing a rebuttal is really the entire point behind this article.  I can’t be that guy writing comments and letters to the editor talkin’ about “how dare you…”  At the same time, I can’t stand the comparisons.

I CAN however write about it in my website, because in this here hiss fit, whatever I say goes.

And in the efforts of good sportsmanship, I’ll give you a link to his piece (of you know what).  Just click below:

To Duncan Roy I say, if you don’t like what we have, go back out and get what you got.  There’s no point in white-knuckling it and bumming everyone out.  Misery is fully refundable.