THE – I HATE PROJECT RUNWAY – BLOG 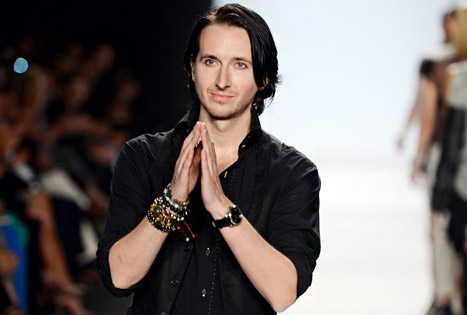 My ass FINALLY caught up with the season finale of Project Runway Season 10 via TiVo, and I gotz to tell you that they did it to me again.  They had my ass FUMING when they announced the winner.  This is Project Runway’s 10th anniversary and they ended this season with the same tired and super obvious upset like the do every season.  They always focus on one designer’s runway show, they build him/her up to be the winner, shower him/her with compliments and then comes the “upset” ending.  He/she NEVER wins.

This season, the poor sap that got screwed was Fabio.  The judges raved over his collection.  They said it was original.  He took direction.  The colors were were different.  He put on a show.  It was cohesive (they use the word “cohesive” a lot) and they even quoted Christopher as saying, “If Fabio doesn’t win, I’m going to be so upset.”  So of course Fabio didn’t win.  The PR crown went to the guy with personality minus Dmitry Sholokkov, whose clothes are pretty sweet, but there some obvious misses in his collection, such as those two fringe numbers that looked like Flamenco dresses and were not very “cohesive” with the rest of the collection.

The show was sooo boring this season that I didn’t bother to remember their names.  I COULDN”T care less about the background stories with the obvious villains (why do people always say “I could care less” when they actually “couldn’t?”) and predictable breakdowns.  I seriously found myself fast-forwarding through the drama and all of Tim Gun’s name-dropping and product-placement to the actual runway show the entire season.

I think Dmitry is super talented.  I loved a lot of his shit throughout the show, and found myself shocked that he kept being dismissed from the stage as “safe.”  I’m not so much annoyed that he won as much as I’m annoyed that he wasn’t built-up or set up as the winner.  The obvious win was Fabio, for all the reasons that were sliced and diced and aired on the show.  He looked pretty confident that he would win.  At least they aired shots of him looking confident on that stage.  And then…TEARS!!!

I think the producers of Project Runway need to rethink their strategy with their stewpid upset endings.  If you’re gonna say that one designer is better than the rest.  If you’re going to build this designer as the winner…then fuck me for saying so, but maybe he/she should win.  THAT would be an upset in itself.  The obvious upset ending is why I missed season 6, Season 7 and fast-forwarded through most of season 9.  I know sooo many people who don’t even bother.  Gone are the days when we had TV gatherings to watch this show, because we all loved, Hiedi, Nina, Tim & Mike.  It’s like what’s the point?

Fuck you Project Runway!  I’ll check back with you in a couple of years.

LOVE SPENT: THE MADONNA MDNA EXPERIENCE PRE-HALLOWEEN UNDER THE SEA