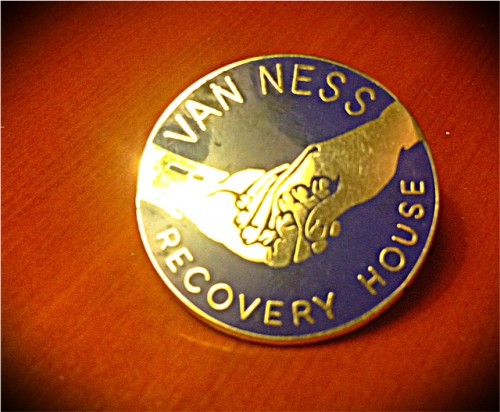 The Van Ness Recovery House pin you see above is about the size of a quarter, but the significance of that pin means more to me than words could ever pronounce.  Seriously.  This is the pin that you get when you complete the program at VNRH.  Not too many people walk away from that house with this pin stuck to their collar.  I’m sure it resonates many different things to those who own this sucker.  I look at this pin, and the one word that really stands out for me is complete, total and utter surrender.

Exactly five years after leaving the Van Ness Recovery House, THE FIGHT Magazine asked me to do a write up on the VNRH for National Recovery Month.  Going back to the house brought up a lot of feelings for me from when I was a resident in 2007, but the program director Kathy Watt, reminded me that she too was a resident at VNRH back in 1976.  Kathy was gracious and generous with her time.  I walked away from our interview with a two-hour/7,000-word  transcript that I had to condense into 1,500 interview.  Below are results. 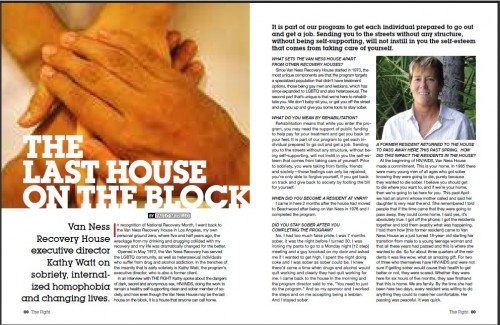 THE LAST HOUSE ON THE BLOCK

BY PAULO MURILLO
—
In recognition of National Recovery Month, I went back to the Van Ness Recovery House, my own personal ground zero, where five and half years ago, the wreckage from my drinking and drugging collided with my recovery and my life was dramatically changed for the better.
Opened in May 1973, the Van Ness Recovery has served the LGBTQ community, as well as heterosexual individuals who suffer from drug and alcohol addiction.  In the trenches of the insanity that is early sobriety is Kathy Watt, the program’s executive director, who is also a former client.
In an interview with THE FIGHT, Kathy spoke about the dangers of dark, secret and anonymous sex, HIV/AIDS, doing the work to remain a healthy self-supporting clean and sober member of society, and how even though the Van Ness House may be the last house on the block, it is a house that anyone can call home.
.
What sets the Van Ness House apart from other recovery houses?
Since Van Ness Recovery House started in 1973, the most unique components are that the program targets a specialized population that didn’t have treatment options, those being gay men and lesbians, which has since expanded to LGBTQ and also heterosexual.  The second part that’s unique is that we’re here to rehabilitate you.  We don’t babysit you, or get you off the street and dry you up and just give you some tools to stay sober.
.
What do you mean by rehabilitation?
Rehabilitation means that while you enter the program, you may need the support of public funding to help pay for your treatment and get you back on your feet.  It is part of our program to get each individual prepared to go out and get a job.  Sending you to the streets without any structure, without being self-supporting, having a job will not gain you the self-esteem that comes from taking care of yourself, because prior to sobriety, where you were taking from family, friends, society, those feelings are really only repaired and you’re only able to forgive yourself if you get back on track and give back to society by footing the bill for yourself.
.
When did you become a resident at VRNH?
I came in here 2 months after the house had moved to Beachwood after being on Van Ness in 1976 and I completed the program.
.
Did you stay sober after you completing the program?
No.  I had too much false pride.  I was 7 months sober, it was the night before I turned 30; I was ironing my pants to go to a Monday night [12 step] meeting and a guy knocked on my door and asked me if I wanted to get high.  I spent the night doing coke and I was sober as sober could be. I knew there’d come a time when drugs and alcohol would quit working and clearly they had quit working for me.  I came back to the house in the morning and the program director said to me, ‘You need to just do the program.’  And so my sponsor and I worked the steps and on me accepting being a lesbian.  And I stayed sober.
. 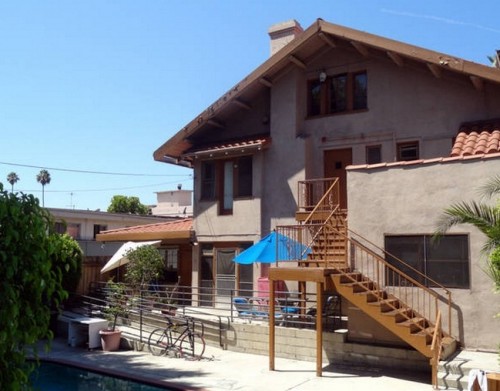 .
A former resident returned to the house to pass away here this past spring.  How did this impact the residents in the house?
At the beginning of HIV/AIDS, Van Ness House made a commitment.  This is your home.  In 1985 there were many young men of all ages who got sober knowing they were going to die, purely because they wanted to die sober.  I believe you should get to die where you want to, and if we’re your home, then we’re going to be here for you.  This past April we had an alumni whose mother called and said her daughter is very near the end.  She remembered I told people that if the time came that they were going to pass away, they could come home.  I said yes, it’s absolutely true.  I got off the phone; I got the residents together and told them exactly what was happening.  I told them how [this former resident] came to Van Ness House as a just turned 18-year- old starting her transition from male to a young teenage woman and that all these years had passed and this is where she wanted to die.  So for about three quarters of the residents it was like wow, what an amazing gift.  For two of three who themselves have HIV/AIDS and were not sure if getting sober would cause their health to get better or not, they were scared. Whether they were here for six hours of five months, they saw firsthand that this is home.  We are family.  By the time she had been here two days, every resident was willing to do anything they could to make her comfortable.  Her passing was peaceful.  It was quick.
.
Would you say it’s harder for transgender people to stay sober?
I believe and I’ve seen after doing this work for 22 years, that yes.  It is a bigger struggle for any quote-on-quote specialized, different, non-mainstream drug addict to stay sober.  Anyone who has something for which society will judge, marginalize or oppress, I believe has a tougher time, because you just have more issues, more parts of who you are to talk through, write through, and you need more trust that it will be OK—but having said all that, does it make it impossible?  No. If somebody comes in and they’re willing to be open-minded, they can stay sober.  I don’t think anybody is such a special case that being sober is not an option for them.
.
What sort of sexual wreckage do you encounter and what work do you do around sober sex?
For most people in the Van Ness House, their sexual lives have become behaviors and patterns that are dark, anonymous and secretive.  We start right off the bat with what are the things that you need to talk about to change that pattern.  We do it very intimately and we do it graphically.  We live in metropolitan LA here.  We have a very high concentration of HIV.  We are also lucky to have a lot of billboards to remind people to use condoms.  But less than 10% of our resident have ever gone to the store and actually looked to realize that there are many options of condoms.  We have a conversation about STDs. We have the conversations around how your viruses are not identical twins.  No two bodies are the same.  Here’s this big swimming pool called metropolitan LA and while you may think you’re jumping in with everybody that’s just like you, the reality is, you’re not.  Taking care of your sexual health has to be paramount.
.
Do you deal with a lot of internalized homophobia?
The people that cross the thresholds of the Van Ness House can say they’re gay, lesbian, transgender, or just say they’re an alcoholic addict.  Admitting is not the problem, it’s  the accepting and asking what are the parts of yourself that you’re willing to throw away, don’t believe you can accept as equal and therefore you will continue to do the patterns of behaviors that are destructive.  Many people come here thinking they get rejected because they are gay or transgendered, but once the consistency of sobriety happens and we become that son, brother, sister family member that shows up…what our sexuality, sexual orientation, or gender is—very few families care.  The idea that their family member is no longer killing themselves is what matters, but that takes a long time and so until that time comes and if it never comes, we are home.
.
What are your biggest challenges in the work that you do?
Keeping the doors open.  We are the only program funded by the county of Los Angeles where federal, state and county money cover less than 50% of the beds. When Van Ness House got its first contract, the county drug and alcohol program office funded 10 beds.  Today they fund 3.2 beds.
.
What are the benefits?
Watching people’s lives change.  Watching people become the person they never dreamed was possible.  Watching people fulfill what they thought were crazy wild ideas come to fruition.  When someone goes home and their family opens their door and they remember coming here as residents and saying their family will never talk to them again.  Watching the miracles happen.
.
What do you see in the future for the Van Ness Recovery House?
We’re in uncharted waters.  Who knows what the Affordable Care Act will be.  What we do know is, that the county of Los Angeles has recently gotten its own insurance plan Healthy Way LA and they don’t cover drug and alcohol treatment, so when it comes to the Affordable Care Act and its implementation, where will drug and alcohol treatment be?  I don’t know.  We’ve never been at this juncture before.  Keeping the doors open is tough.  But our doors have never closed.
====
To learn more about the Van Ness Recovery House, or to make a donation to the House, please visit: www.vannessrecovery.org.

To read the article in PDF format, click here:  The_Last_House

For more on THE FIGHT MAGAZINE visit: www.thefightmag.com

The issue is out NOW, so pick up a copy. 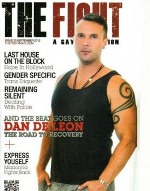