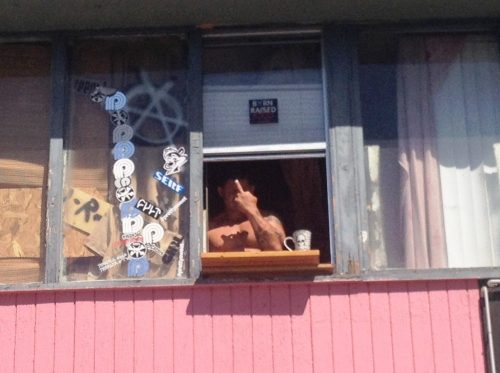 My ass was straight-up on old school scrub status riding shotgun on the passenger side of my best friend’s ride down Melrose Ave after buying some essentials at the West Hollywood Gateway’s Targay.  It was stop-go traffic from stop light to stop light.  During a long pause, I looked above me and I spied with my good eye a shirtless roids daddy hanging from a tiny window located on the second floor of one of those tiny boutiques that Melrose Ave is famous for.  The guy could barely fit through that hole, but his bulging pecs burst over that ledge like a skanky hooker at the Red Light District.  He was either sunbathing, writing a grocery list, poetry or drawing something, completely oblivious to the traffic beneath him.  He clearly wanted to be seen—and OMG, what a sight to behold watching his tattoo-sleeved arm holding a skull coffee mug next to an anarchy graffiti symbol and a bunch of skater/surfer stickers.

“Turn around, turn around!”  I told my friend.  “I simply MUST capture this urban Los Angeles scene in all its shirtless douche glory.”

“Are you for real?” My friend asked incredulously.

He busted four right turns until we reached that small window.  Of course, Los Angeles traffic is never there when you need it.  We were the only car stopped on the street beneath my subject.  I couldn’t find him on the the screen of my iPhone at first.  I thought he had moved, but when I spotted him, I quickly realized that he had spotted me also.  Imagine my surprise when all I saw on my screen was a tattooed arm giving me the middle finger.  It was like egging someone and having that person catch that egg and egg you back.  I was so so moded.  I wanted to capture him in his natural state, but I reckon the middle finger made this a much better photo. 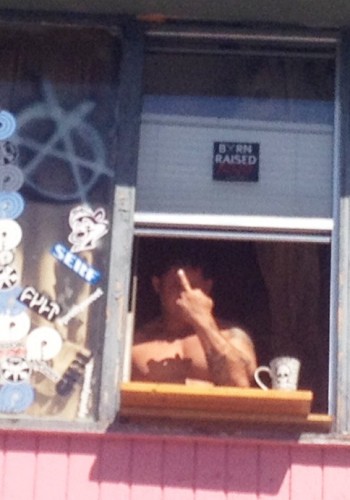 The last glimpse I got of this guy, he was laughing, looking quite pleased with himself.  I smiled back and gave him a thumbs up.  It later occurred to me that he probably thinks I want him with his big muscles, cuz that’s how they do.

He was a good sport, so I reckon that makes him less of a douche.

AND I got my shot for the day.