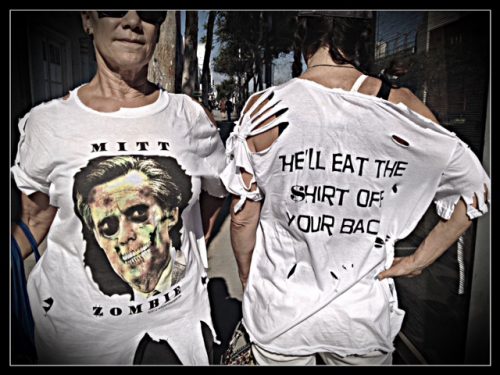 From a distance, these two old broads looked like they were movie extras fresh off the set of a Flashdance remake, or like they were walking home after a WeHo flash mob.  I stopped them on their tracks to take a photo.  The delight to the right designed the shirts (or was it the one on the left?).  She immediately asked me if I wanted to buy one.  I hesitated with thoughts of dance moves from the Thriller video whirling in my head like a spinning wheel—I’m all for irony and political incorrectness, but buying a shredded shirt off the street for a stewpid punchline was out of the question.  I straight up told her “nope,” I just wanted to post the photo on Facebook.  I asked her if she had a website, just to be polite, but the lady was pushing merch on the sidewalk no differently than Angelyne the Billboard Queen, sans the kewt pink Corvette.

The Mitt Zombie pun was pretty special,  but the back of this shirt made it kinda/sort brills—“They’ll eat the shirt off your back.”

Amen to that sistahs.

I took my photos and kept stepping.  I was afraid if I engaged much longer, these two bitches would eat the wallet right out of my shorts.

VOICES ON POINT FOR POINT FOUNDATION MADONNA CALLS OBAMA A MUSLIM – WTF!!! WHY???