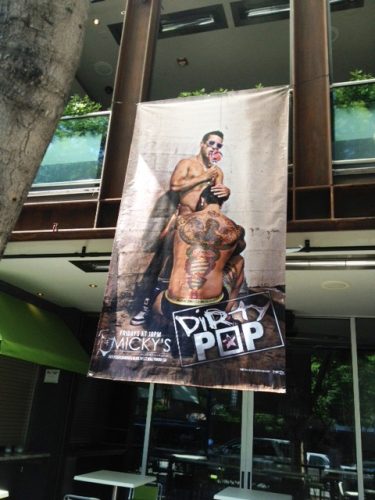 They say, “What about the children?”  And queens get so annoyed talkin’ about “What ABOUT them?  This is West Hollywood!  We’re here, we’re queer.”

I have nephews as little as 4-years old.  I would never take them for a stroll past the Chi Chi LePew porn store where they are known for graphically playing with the word “toy” in sex toy, but that’s only because I know better.  Let’s face it, Santa Monica Boulevard in WeHo’s heart is not for children, even though the WeHo Library and WeHo Park are only a jump rope skip and a corner away.  You never know what you’ll find littering The Other Boulevard of Broken Dreams the morning after.  You can trip over a graphic postcard advertising sex clubs and bathhouses, you can find condoms, a glass pipe or a baggie.  Boystown is a playground for overgrown “boys,” not for children. 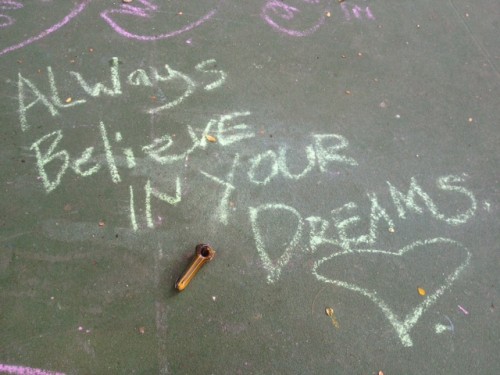 Then I see a HUGE promotional banner go up at Icky’s—err, I mean, “Micky’s” for Friday night’s Dirty Pop where a little guy is sucking on a cute lollipop with his underwear pulled down while a big muscle queen is bent on one knee pretending to suck his dick in some dirty back alley.  The muscle queen is twice his size with a nasty tramp stamp pointing a metaphorical arrow down to his loose hole.  The banner could be seen down the street, so you best believe it is not missed by the cars that drive past it–a lot of these cars are with child on board.

I love stirring the shit.  I’m all for being offensive. I’m all for sexual innuendo, and tongue-in-cheek irony—however there’s a time and a space for these sort of shenanigans.  I find nothing suggestive, cute, or playful about this banner.  It’s dumb, it’s lazy and plain old boring gay porn.  It plays on predatory fantasies and homo stereotypes that don’t serve gay men all too well—“Here little boy, suck on this lollipop while I suck on your little dick…”  What is the point behind this image and why is Icky’s allowed to hang it from its patio for the public to behold down the street?  It’s not pop art.  It’s not on and poppin’.  It’s just plain dirty.  Are cars supposed to drive around the block to avoid this sort of thing because we’re here, we’re queer, get used to it?

You could have both guys leaning against the wall and licking a lollipop, but I reckon that defeats the purpose of the “dirty” in pop.  Hey, when in doubt, suck some dick.

Give me a fucking break!

I look at this banner and I can’t help but clutch my pearls and go there.

“What about the children?”