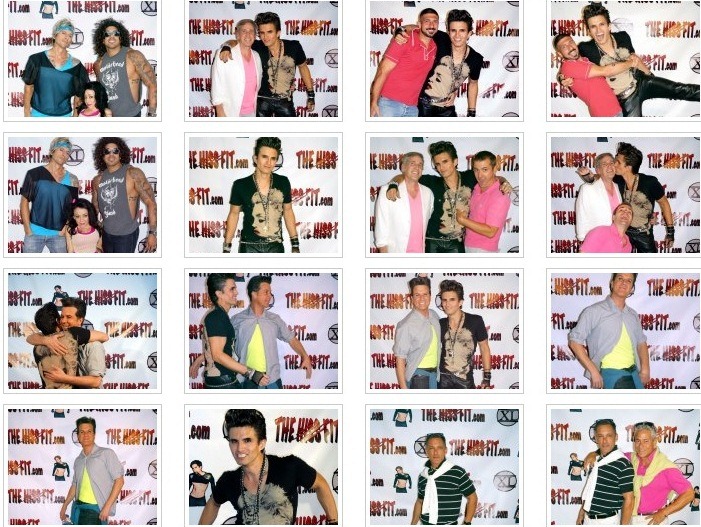 Throwing a birthday party can be a real bitch.  However, throwing an 80’s party to celebrate my many years on this planet was actually kind of…umm…”bitchin'” (cringe).

I was NOT keen on idea of a party at first.  I warned those around me that hell would go belly up and burst if I walked into a room and faced a giant banner with the big four-o splashed all over it.  I surrendered to a birthday bash, but people were warned.  I still on the fence, but once those invitations went out, there was no turning back.  We were originally going for a 70’s theme, since I was born on the year that Nixon was impeached, and the same year the Laugh Factory opened on Sunset Blvd in WeHo, but I don’t have any real connection to 70s music and I was NOT about to have people doing the electric slide at my party!  So we settled for 80’s, although things didn’t get crackin’ for me till the 90s when I hit my first gay club, Arena and I danced my ass off to techno and to the sounds from C&C Music Factory, 2-Unlimited, Black Box, Crystal Waters, Robin S. and others who have been regurgitated by the likes of Usher, and what’s-his-face—the guy who beat the crap out of Rihanna.

We decided to go for straight up 80s realness, because it really all started with Madonna–Like a Virgin style.  I knew I wanted some jumpy 80s sounds (duh).  I wanted to give my friends the star treatment, so like of course, we HAD to have a step & repeat with a red carpet, velvet rope and photos—I was actually surprised at how not too many people knew what a “step & repeat” was, let alone what it was for—AMATEURS!!! 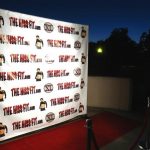 I was only allowed to plan my outfit and the red carpet moment.  My partner Kev took charge of planning and executing the actual party; which consisted of hiring a DJ (as in DJ Quin Callicott), and keepin’ it real with a taco stand where Mexican women made tortillas right there in front of you.  He also took on the challenge of baking my birthday cake from scratch.  Oh yeah, and he also provided the venue at his beautiful home.

I used all my resources to create a new website logo for the step & repeat.  I decided to be a sport and throw in the big four-o on the wall, but I did it sneaky style by using the roman numeral XL, cuz I knew people would NOT get it.  The more elements we threw into this party, the louder the cash register went “ka-ching.”  My ass was on thrift mode when I asked one friend to lend me his professional camera and another friend to take photos (a good gay should always have two kinds of people on hand: Someone good with a sewing machine. And another one good behind a camera lens—I don’t make the rules).

My friend Johnny had no qualms about lending me his professional Nikon—however, he warned me that he had a 32 Gig memory card with close to 500 photos that he wanted me to guard with my life (there were photos in there of him at the London Olympics with his partner, gold medalist Greg Louganis).  I told him, not a problem.  I would buy my own memory card, so I could keep my photos and we were good to go.  He handed me the camera.  I pictured the camera falling off my hands and shattering into bits and pieces.  I pictured it getting stolen.  But I took that shit anyway.  He gave me the camera with the sweetest birthday card and a gift certificate to Samy’s Camera.  He wrote that he was making a donation so I could get my own professional camera one day and capture some wonderful memories of my own.  Sooo sweet.

SOOoo we get home.  I remove the memory card and place it on my lap.  Turns out the memory card I own is a perfect match, meaning I wouldn’t need to buy a new one.  I tested the shit out on the couch, taking pictures of our kewt pup Yuki, who mugged for me like the perfect little angel.  I played with the setting of this camera to get familiar.  Then I looked down on my lap.  And the 32 Gig memory card was gone.  I look down on the floor, and I see Yuki chewing on something like it’s a wad of gum.  Of course, I remove the mangled 32 gig memory card from her snout and my heart dropped to the heels of my feet.  I. Fucking. DIED!!!  Close to 500 photos lost.  This was a HUGE blow to my party.  I wanted to kill that little bitch, but was too stunned.  It was two days to the party.  I thought about his note where he wants me to capture memories.  Here I went and destroyed his.  I think I slept like three hours that night.

The next day, I rushed to Samy’s to see if they could retrieve the photos.  They could not, but they knew a company that probably could.  They use FBI technology.  It would cost me thousands.  My stomach sunk.  All I heard was that the photos were lost.  I had to make that uncomfortable call.  The old me would have replaced the memory card on sneaky bitch status and pretended like nothing happened, feigning shock that his photos were lost, acting confused and even fighting him and blaming him for losing his own photos—“How DARE you accuse me…” (no lies).  Alas…I play by a different set of rules these days.  I HAD to come clean.   With a heavy heart on the palm of my hands, I made the call.  It was one day till party time. I chocked on the sordid details.  And wouldn’t you know it, honesty actually paid off, cuz he laughed at me when I mentioned that Yuki chewed on his memory card like it was gum.  He dismissively told me not to worry about it.  All those photos were backed up and even if they weren’t, what could be done?  These things happen.  He could have given me shit.  He could have screamed and yelled.  He’s 20 years sober.  All he asked is that I replace the memory card and we were good to go.  The fucker cost over a $100, but still, a huge load was still lifted.

THE PARTY WAS BACK ON!!!

Then cut to my partner Kev sweeping the backyard.  Our cute lil’ pup Yuki is usually right there in the middle of the action, however she was MIA at the moment.  Kev walked into the kitchen.  And he found Yuki on the table with her white little face buried in my birthday cake.  She got beat this time around.  And my poor baby was up till 2 a.m. baking me a new cake that.  The result was a Ms Pac Man Cake with Ghosts and video arcade realness!  VERY impressive. 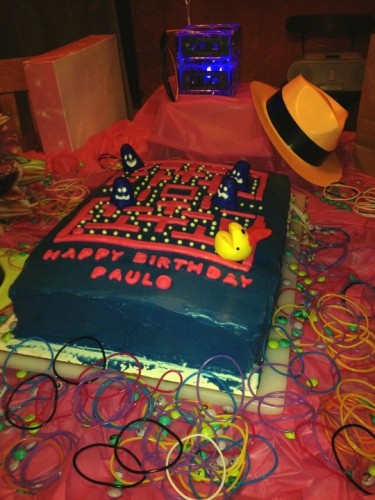 Disasters and the shitload of work that went into making it happen aside, I have to say that the party was probably one of THE happiest moments of my life!  I had my hair done up by the fabulous Judd Minter who is responsible for Kelly Osbourne’s locks, Fran Drescher and others celebs—“Bitch can grow some hair,” he made fun of my wig.  My makeup was done up by the super duper talented John T. Stapleton, who is a rock star at Mac Cosmetics and also does Kelly O and a long list of celebs (hair and makeup team are also a must for any gay tool box).  I swore I was giving you punk, but I stood corrected when people told me I was actually giving you New Wave.  Selene Luna graced us with her presence.  My sister Nancy made it, then my brother showed up with his wife (also named Nancy).  I had Madonna on the front and back and I was surrounded by some of my closest friends, some of whom0 I have known for over 20 years.  Crooner and friend Micheal Patrick Caughlin serenaded me with a beautiful  Madonna medley.  Then I had the closest thing to Madonna I ever encountered when Luis Camacho from The House of Extravaganza busted out some Vogue moves to the M’s “Girl Gone Wild.”  I COULD SERIOUSLY DIE HAPPY THAT NIGHT!!! 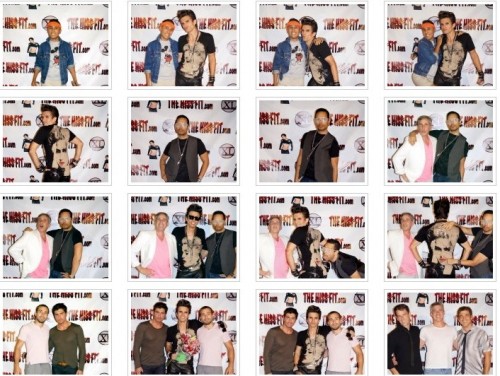 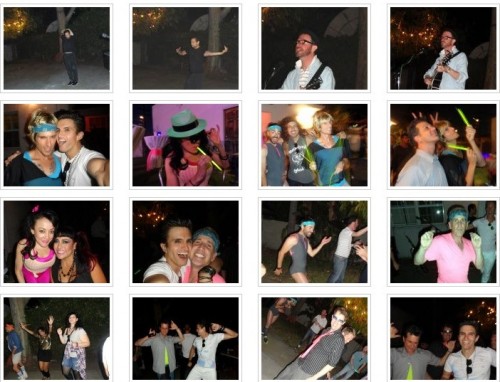 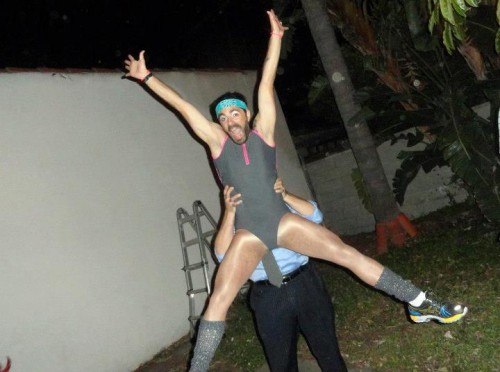 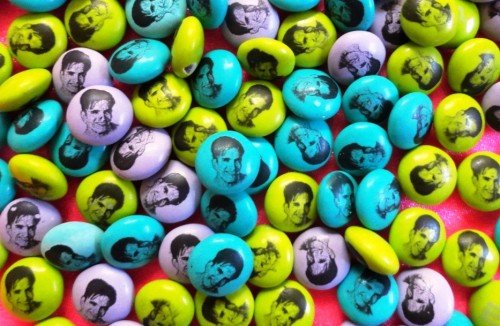 The food was good.  The cake was delicious.  People dressed up in their best 80s duds.  Of course, I had a costume change.  I just wanted to dance, and dance we did.  I channeled Desperately Seeking Susan when “Into the Groove” came on–My brother and I were not allowed birthday parties because we were boys and boys didn’t  get cake, because we needed to act like men.  Here I got to wear eyeliner with my bangs pointing high into the sky.  Fun, fun, FUN!

After it was over, people didn’t say, “Great party.” “Thanks for inviting me,” they said “Bitch, I had so much FUN.”  Which I reckon was the whole point.

Thank you Johnny Chaillot for lending me your camera and being a great sport.  Thank you Bruce B. Heller for taking such great pics.  Thank you Judd Minter for my hair up do.  Thank, THANK YOU John T. Stapleton for the Mac beat down.  Thank you Brandon and Marko for helping out with the cake supplies.  Jeff Bridges for for the Step & Repeat artwork.  Thank you David Neundorf for the spotlights.  Thank you Quinn for the music.  Thank you Steve Auchelo, Dan Mryglot, & David Minicucci for showing up early and helping with the setup.  And special thanks to MPC and Luis Extravaganza Camacho for your special performances.  THANK YOU, THANK, THANK YOUUUU!!!

Also my guy Kev threw a fucking AMAZING party.  He made me feel so special and loved.  The next morning I woke up looked into his pretty green eyes and said…”So now WHAT?”

Oh yeah:  It was a happy ending all around.  Kev went behind my back and got my friends to get me gift cards to Samy’s Camera.  I collected enough to get EXACTLY what I wanted.  Behold my brand new Canon EOS Rebel T3i.  You best believe I plan to capture the memories. 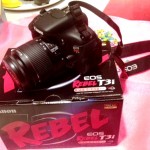