COFFEE FLIES OFF THE SHELVES FOR STARBUCKS APPRECIATION DAY!!! 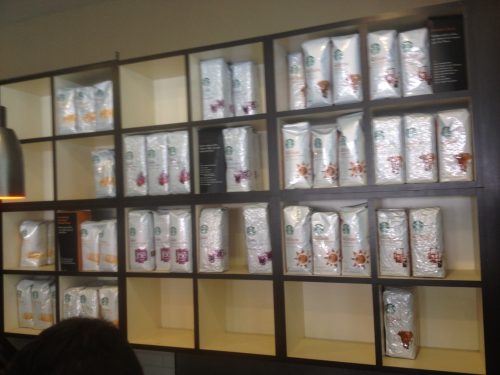 I’m not sure how it went down at the Starbucks near you for yesterday’s Starbucks Appreciation Day, but in West Hollywood, this was clearly no ordinary day as the coffee was flying off the shelves at around 10am, which is when I took this photo.  I wish I had gone back to see how they fared later in the day.

Coffee is an everyday routine for most people, so it was kind of cool watching people buy an extra pound of coffee, or a coffee mug in appreciation of Starbucks for their support of marriage equality and other pro-LGBT causes.  The day probably would have fared better if the word had gotten out sooner and broader.  Half the people I know didn’t know what was what.  People were like, “What happened?”  One guy thought they were having a special in appreciation of their customers (“give me”).  Truth be told, I would NOT have been in the know if it weren’t for Facebook.

To those of you who dug into your pockets and purchased that little extra sumthin’/sumthin’ in support of Starbucks Appreciation  Day yesterday, I just wanna say thank you.  I love you more today.