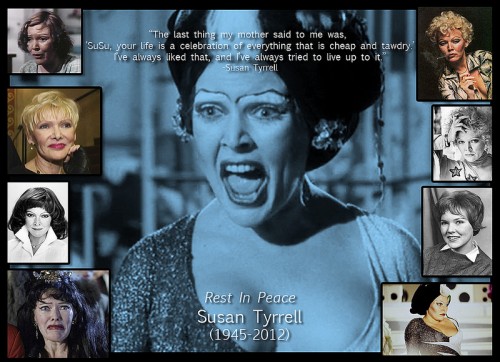 I just learned that cult queen Susan Tyrell aka SuSu, died this month. I mostly know her for her role as The Queen of the the alternate universe in Oingo Bongo’s musical film Forbidden Zone.  She also dated Herve’ Villachaize, aka Tattoo from Fantasy Island (moving along).

Her IMDB bio describes her as a Hollywood gypsy , self-affirming outcast, bizarre, seamy, salty-tongued, highly dysfunctional, and offbeat.  She was attracted to the dark side by portraying the cynical, low-life girlfriend, various whores, harridans and grotesques.  She was an Andy Warhol darling and of course John Waters had to get a piece of her.

Favorite quote: “I’m a loner. I don’t like beautiful people, but I find beauty in the grotesque. And in the sweet soul inside someone who has been able to get through their life without being a rat’s ass. Such people should be collected, should be swept up immediately and kept in a box of broken people. I’ve collected people my whole life. Sometimes it ends badly, but it’s absolutely never on my part. Because I know how fabulous I am. You’re just going to have to take my word for it – I’m an incredible person. I do good deeds, and I love people, but the only way I can do these things is to stay apart. Because you can just stand so much. But the people who you meet in your life, who cross your path, the ones who are decent, should be collected.”

She lost both her legs to a rare blood disease in 2000.  She turned that negative to a positive by insisting she could then play midgets.

My kind of girl.

May she rest in peace.