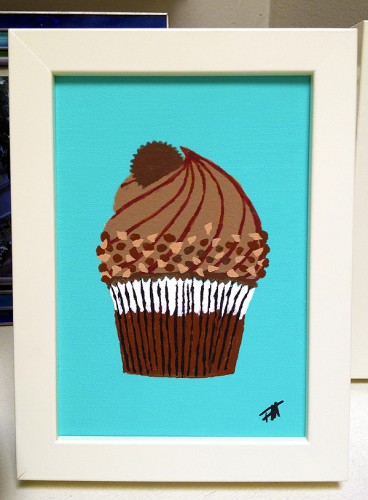 I took to the paint brush recently.  I decided to make some art as part of my Boo’s birthday gift, which I thought was kind of ballsy, cuz I’m not a painter.  I decided to create some cupcakes, on account of when he was sniffing my tail before we started dating, he showed up at my j.o.b. for my birthday with cupcakes two years ago.  He was so nervous and shy.  I purposely kept calling his cupcakes muffins to make him mad.

“They look like muffins with frosting on them.”  I told him.

“ANDDD…that’s what makes them cupcakes.” He responded, unsure if I was kidding.

Anyway, for X-Mas he got me a gift card to an art supply place.  I made him three little 4×6 paintings for Valentines Day this year—an eye, a heart and a sheep with a pink bow to represent a ewe (get it: Eye Heart Ewe).  He loved them so much, that I decided to up the game and add more color to an acrylic cupcake collection.

My friends thought I was being a cheap ass by making some arts and crafts.  Making art is not that cheap and the shit takes time and dedication.  I always knew I could draw.  I used to create comic books when I was a teen; they were twisted and always involved murder and mayhem with blood soaked women fighting for their lives and trying to get away from Jason of Friday the 13th (I was clearly disturbed).

Painting however, is a whole different ballgame.  I was discouraged from painting after one visit to Color Me Mine.  I purchased a treasure trinket box.  People said painting would be relaxing–however, my ass was so damn busy competing with everyone around me that my ceramic box came out looking completely sunk.  It was all gray and ugly.  It was NOT the look I was going for.  It was frustrating.  That would be the opposite of relaxing.

I removed the competition and took my time creating my cupcake masterpieces.  The first cupcake looked like a fucking ice-cream cone.  The brush would not do what it was TOLD–ARRGH!!!  That one was scrapped, but the second attempt came out good I thought.  It still looked kind of cartoonish, but at least it resembled a cupcake.  The results improved.  The painting above the header of this here blog started out looking like a human sewer pickle, because I kept using the wrong kind of brown for chocolate.  I finally got the brown right, and then I added that damn Reese’s Peanut Butter Cup, peanut clusters, and chocolate chunks.  It turned out to be my favorite piece.  I decided to make four different paintings.  It was not easy.

On the night of the big unveiling, my guy opened these little 5×7 works of art and he was clearly moved by my attempts.  He said all the right things.  He acknowledged how intimate creating art can be.  He also recognized that he was the only one who owns any of my artwork.  Cupcakes are a FAR cry from my past scenes of the macabre murder and mayhem, but I looked at those paintings in his room after obsessing over them for weeks and I thought…SCORE!! 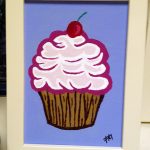 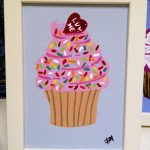 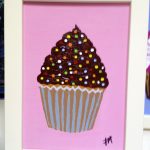 I’m not having an art gallery opening anytime soon, but this was a pretty good reminder that whatever the mind can conceive, can be achieved.  All you gotz to do is set your mind to it.

HOW HIGH? I CAN’T STAND…