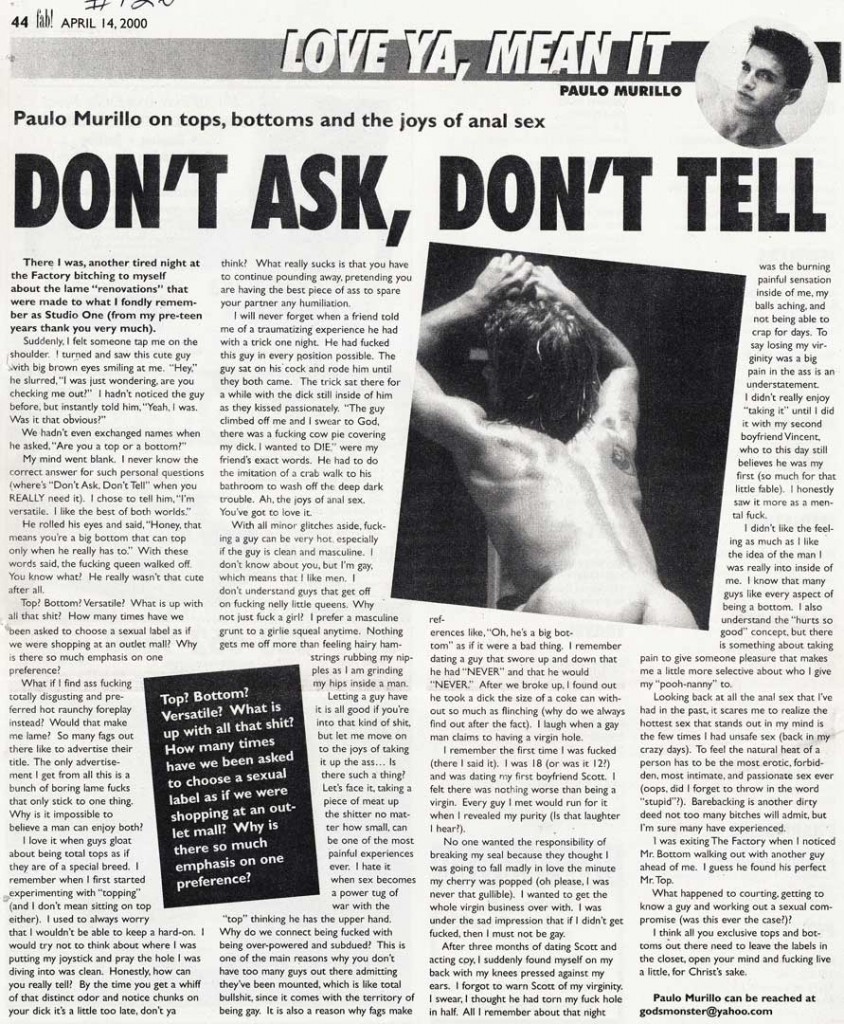 OMG!!!  I can’t believe some of the shit I put out there for people to read.

I had been writing this column for a few months and the hate mail kept pouring in talkin’ about how I can’t write, I’m a hateful hack and there were these annoying accusations about me sucking some dick to get this column space. Then this lil’ ditty came out about sexual labels where I delved into some hokey pokey and THAT was the turning point for me (?).  The entire piece is in extremely poor taste, but people loved it.  I admitted to fucking and getting fucked and suddenly I had something to say.  They decided there was a powerful message to my drivel.  And people actually called me a good writer.

I guess it goes to show–when in doubt–go with what you know.

Keep in mind that this was written a long time ago, back when I was old enough to know better, but still young enough not to give a fuck. Of course, it all came back to bite me in the ass in the end, but there’s something to be said for being so brutally honest–if not blatantly naive.  And yes, some of the sordid details make me cringe today, but honestly, for the most part…

There I was, another tired night at the factory bitching to myself about the lame “renovations” that were made to what I fondly remember as Studio One (from my pre-teen years thank you very much).

Suddenly, I felt someone tap me on the shoulder. I turned and saw this cute guy with big brown eyes smiling at me. “Hey,” he slurred, “I was just wondering, are you checking me out?” I hadn’t noticed the guy before, but instantly told him, “Yeah, I was. Was it that obvious?”

We hadn’t even exchanged names when he asked, “Are you a top or a bottom?”

My mind went blank. I never know the correct answer for such personal questions (where’s “Don’t Ask, Don’t Tell” when you REALLY need it). I chose too tell him, “I’m versatile. I like the best of both worlds.”

He rolled his eyes and said, “Honey, that means you’re a big bottom that can top only when he really has to.” With these words said, the fucking queen walked off. You know what? He wasn’t really that cute after all.

Top? Bottom? Versatile? What is up with all that shit? How many times have we been asked to choose a sexual label as if we were shopping at an outlet mall? Why is there so much emphasis on one preference?

What if I find ass fucking totally disgusting and preferred hot raunchy foreplay instead? Would that make me lame? So many fags out there like to advertise their title. The only advertisement I get from all this is a bunch of boring lame fucks that only stick to one thing. Why is it impossible to believe a man can enjoy both?

I love it when guys gloat about being total tops as if they are of a special breed. I remember when I first started experimenting with “topping” (and I don’t mean sitting on top either). I used to always worry that I wouldn’t be able to keep a hard-on. I would try not to think about where I was putting my joystick and pray the whole I was diving into was clean. Honestly, how can you really tell? By the time you get a whiff of that distinct odor and notice chunks on your deck it’s a little too late, don’t ya think? What really sucks is that you have to continue pounding away, pretending you are having the best piece of ass to spare your partner any humiliation.

I will never forget when a friend told me of a traumatizing experience he had with a trick one night. He had fucked this guy in every position possible. The guy sat on his cock and rode them until they both came. The trick sat there for a while with the date still inside of him as they kissed passionately. “The guy climbed off of me and I swear to God, there was a fucking cow pie covering my dick. I wanted to DIE,” were my friend’s exact words. He had to do the imitation of a crab walk to his bathroom to wash off the deep dark trouble. Ah, the joys of anal sex. You’ve got to love it.

With all minor glitches aside, fucking a guy can be very hot, especially if the guy is clean and masculine. I don’t know about you, but I’m gay, which means I like men. I don’t understand guys that get off on fucking nelly little queens. Why not just fuck a girl? I prefer a masculine grunt to a girly squeal anytime.  Nothing gets me off more than stealing hairy hamstrings rubbing my nipples as I am grinding my hips inside a man.

Letting a guy have it all is good if you’re into that kind of shit, but let me move on to the joys of taking it up the ass… Is there such a thing? Let’s face it, taking a piece of meat up the shitter no matter how small, can be one of the most painful experiences ever. I hate it when sex becomes a power tug-of-war with the “top” thinking he has the upper hand. Why do we connect being fucked with being overpowered and subdued? This is one of the main reasons why you don’t have too many guys out there admitting they’ve been mounted, which is like total bullshit, since it comes with the territory off being gay. It is also the reason why fags make references like, “Oh, he’s a big bottom” as if it were a bad thing. I remember dating a guy that swore up and down that he had “NEVER” and that he would “NEVER.” After we broke up, I found out he took a dick the size of a Coke can without so much as flinching (why do we always find out after the fact). I laugh when a gay man claims to having a virgin hole.

I remember the first time I was fucked (there I said it). I was 18 (or was it 12?) and was dating my first boyfriend Scott. I felt there was nothing worse than being a virgin. Every guy that would run for it when I revealed my purity (Is that laughter I hear?).

No one wanted the responsibility of breaking my seal because they thought it was going to fall madly in love the minute my Cherry was popped (oh please, I was never that gullible). I wanted to get the whole virgin business overt with. I was under the said impression that if I didn’t get fucked, then I must not be gay.

After three months of dating Scott and acting coy, I suddenly found myself on my back with my knees pressed against my ears. I’ve got to warn Scott of my virginity. I swear, I thought he had torn my fuck hole in half. All I remember about that night was the burning painful sensation inside of me, my balls aching, and not being able to crap for days. To say losing my virginity was a big pain in the ass is an understatement. I didn’t really  enjoy “taking it”  until I did it with my second boyfriend Vincent, who to this day still believes he was my first (so much for that little fable). I honestly sorted more as a mental fuck.

I didn’t like the feeling is much as I like the idea of the man I was really into inside of me. I know that many guys like every aspect of being a bottom. I also understand the “hurts so good” concept, but there is something about taking pain to give someone pleasure that makes me a little more selective about who I give my “pooh-nanny” to.

I was exiting The Factory when I noticed Mr. Bottom walking out with another guy ahead of me. I guess he found his perfect Mr. Top.

What happened to courting, getting to know a guy and working out a sexual compromise (was this ever the case?)?

I think all you exclusive tops and bottoms out there need to leave the labels in the closet, open your mind and fucking live a little, for Christ’s sake.