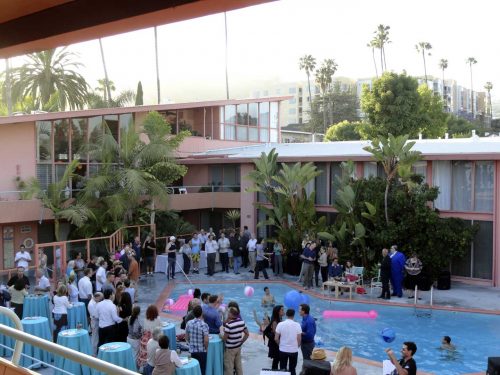 I got a root canal today for the first time (or I got the first part of a 2-visit root canal).  Then I went to my first pool party of the summer, which I must admit was about as cool as you can imagine a pool party could get when it’s officially thrown by city officials from the city of Weho.  I’m talkin’ about a 1960’s setting with live lounge music playing in the backdrop–a very distant cry from the pumping/thumping t-dances I was notoriously known for way back when notoriety stood for something.

I was actually there on assignment for my Hot Topic column.  The city celebrated the preservation of their historical buildings by throwing a pool party at the historically significant Hollywood Riviera on Hayworth Ave, which is kind of funny, cuz I believe there’s a fight to save a similar complex only a few doors down that they’re trying to tear down–but no matter…this is a celebration of the buildings that have been restored and preserved.

Anyway, the Novocaine was wearing off and my busted tooth screaming in my ear, when a cute guy approached me with these green eyes aimed at me like he knew me.  He said something rapidly before walking off.  I was on delay mode when I finally connected the guy is one of the baristas from the Big Gay Starfucks in Weho.  He said something dorky like “Hey.  Where’s your Venti bold coffee.”  I didn’t recognize him out of his uniform, but this is the same guy my friends and I have debates over whether he is straight or gay.  I say he’s straight and only works among gays for pay.  They swear he’s gay, but he doesn’t know it yet.  The truth is I don’t give a shit if he likes to dive into bushes or swing from limbs–my coffee better be Bold and not Pike; I can tell the difference.

He was with a couple of other youngish semi-cuties that I recognized mostly from my Facebook page.  These guys started dancing by the edge of the pool.  They grabbed two  girls and started swinging them around like they did in Happy Days, only clumsy and awkward.  One guy removed his shoes and started doing a dumb rendition of the twist.  Another guy peeled his shirt off, unbuttoned his pants, and pulled them down to reveal some white Speedos (when in doubt, get naked).  I thought, “Oh gawd.  Here we go…” Then there were four guys in swim trunks and two bubbly girls in bikinis.  I noticed Cute Barrista in these modest board shorts that went down to his knees.  They all jumped in the pool.  I thought the music would surely shift into something thumping and bumping, but the cocktail lounge sounds continued while this group of 20-somethings splashed around in the pool with everyone else looked on from a somewhat formal setting. 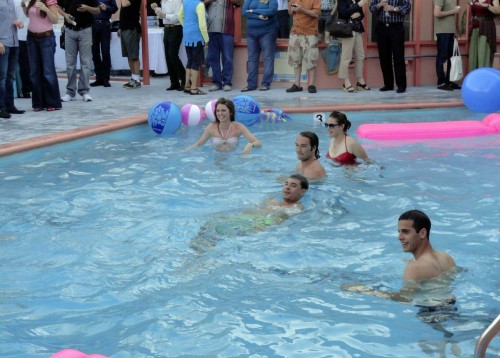 It didn’t take me too long to find out that these were hired models pretending to know each other and pretending to have fun while throwing a ball around in the pool.  They even played chicken and hammed it up for photographers—“Those are models!?” I heard one tall queen ask incredulously. “What agency are they with?”  He demanded to know with disapproval.  “They must be print models.”

Turns out, only the models were allowed to get wet, which of course was grounds for justifiable venom to drip into that pool with horrible comments about failed actors, and flat butts and sunken chests and so forth and so on—“Is the city paying for this?  Is this where my tax dollars are going?”  Of course, all the nasty commentary was coming from guys that have never been allowed in the pool (metaphorically speaking).  Truth is, I don’t think anyone had any desire to get wet–it was after 6pm and the water was probably cold–but everything changes when you find out no common folks were allowed in the water and the space was reserved for models.

I didn’t give a shit about going for a swim.  I had an exposed tooth that would probably fall off the minute it tasted chlorinated water—HOWEVER…I recognize it was interesting (meaning lame) to throw a pool party to celebrate a bunch of old buildings, but only allow youngish models in the actual pool.  Like I mentioned before, this party was thrown by the city.  Maybe there are safety regulations, life guard requirements and other city red tape that makes it close to impossible to throw a cool pool party–that said, I hear the hors d’oeuvres were exquisite.

It turns out my straight/could be gay barista is a male model.  This would surely seal the deal that he’s gay where my friends are concerned.   He avoided eye contact with me after he jumped in the pool and he didn’t go near the boys or the girls in the water (keep ’em guessing).  Not sure what that’s all about, but I will say this:  he seemed a lot cuter to me when it seemed like he was oblivious to being cute.

Anyway, I walked away from that pool party thinking that I seriously need to get out more.