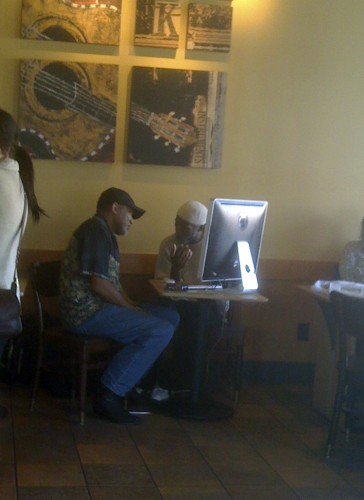 I took this photo inside the Starbucks that’s on the corner of Sunset Blvd and Gower St back in November 2011.  I posted the photo on FB and for the most part people were like “W.hat T.he. F.uck!!!???”  Ghetto-ness aside, I find it funny as all fuck.  The balls of these two men lugging in a TV-sized monitor and parking it on a table as if they were setting up shop and opening for business.

I have to say this scene is only a slight exaggeration to a re-occurring theme in 2011.  I spent a shit load of time at Starfucks in Weho last year and the object of the game was staking your claim on an empty seat among the assholes who think they get unlimited free office space for the price of a coffee or coffee inspired drink with a $0.50 refill.  To these guys I say, do what you gotz to do to get that screenplay, or next Great American Novel finished Boo-Boo, but a lot of these fucks are on hooker patrol with their laptops wide open to their Adam4Adam accounts, while their smart phones stand by with the mating toot-toot-toot call coming from their GRINDR app (you know who you are). 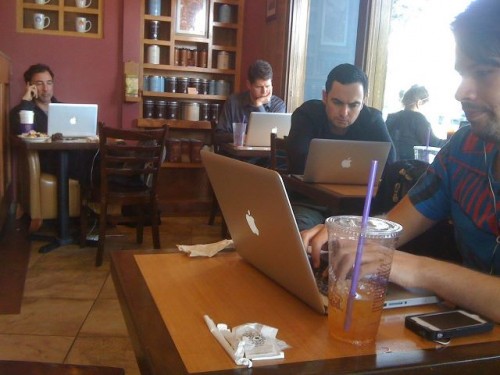 I hear coffee establishments are trying to crack down on parked laptops.  Judging from the TV screen-sized monitor I witnessed a few months ago, the crackdown ain’t working.  It’s gonna take some confrontations to get these guys to change their behavior and go park it somewhere else…like say a library.

I for one, just can’t do it.  I can’t be that guy sitting at a coffee shop trying to get some writing done with annoying people all around me.  I can’t hear what the blank page is saying when I’m surrounded by assholes coming and going  (a lot of them sweaty hot assholes–I admit–coming from the gym across the street) with loud music blaring in the background and queens cackling about the latest gossip sitting at the table next to me.  I CAN’T!!!

I wish I could.  I recognize that there is something to be said about these struggling writers that shamelessly park themselves next to a cup of joe and at least perp like they work on their writing, even if it’s just to strike a writer’s pose.

The TV monitor is a pesky reminder that I have got to get crankin’ and keep writing.

Behold 2012.  I reckon I’m supposed to be giving you a daily blog.  That means one blog a day.  I need to do it–not because you’re reading my drivel–not because you’re leaving me comments, but simply because I enjoy doing it.  At the end of the day that’s really what it boils down to…you gotz to do it because you love it.  And that’s all there is to it.